Feds tell California growers to test their lettuce for E. coli — or keep it 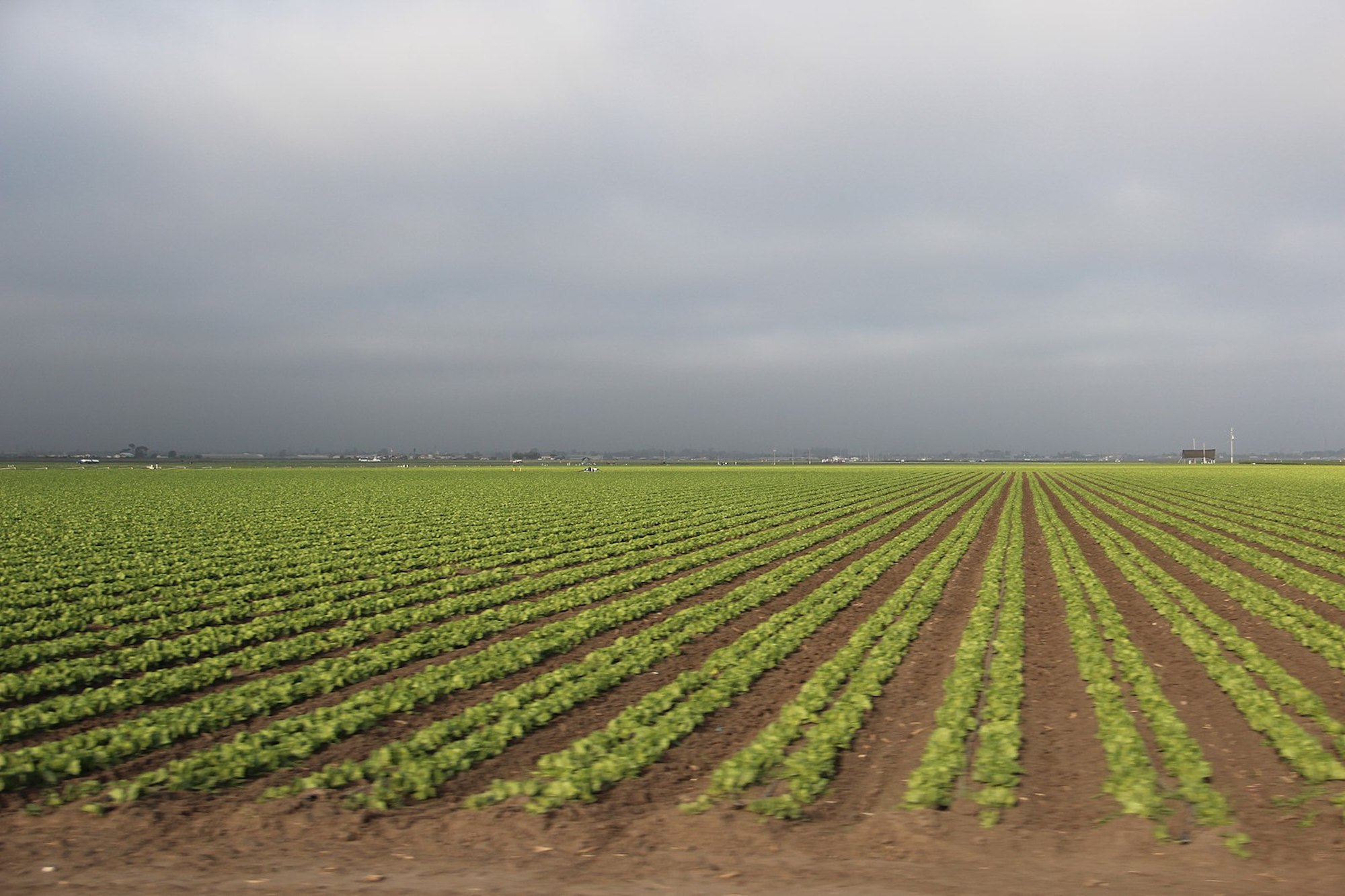 About 97 per cent of field-grown lettuce and lettuce mixes imported into Canada last year came from the U.S., and more than half came from California. Photo by Thomson200/Wikimedia Commons
Previous story
Next story

Companies that import lettuce must now prove each shipment has been tested for E. coli, or was grown outside of California's Santa Clara, Santa Cruz, San Benito and Monterey counties. The directive will remain in force until Dec. 31, to cover the harvest season for California lettuce producers.

Lawrence Goodridge, director of the Canadian Research Institute for Food Safety at the University of Guelph, says repeated outbreaks of E. coli contamination from American farms precipitated the move. There have been at least four outbreaks associated with romaine lettuce alone since 2016, Goodridge said. Investigations by American and Canadian authorities have also pinpointed the region as the source of several past E. coli outbreaks.

“The problem is nobody quite knows how the lettuce is becoming contaminated,” said Goodridge. “It could be the irrigation water, wild animals could run through the field and defecate. It’s hard to trace.”

Canada imported 183,300 tonnes of lettuce from the United States last year, and 64 per cent of that was from California. The remainder came from Arizona, Ohio and Florida. Between June 2019 and July 2020, more than 50,000 shipments of the vegetable crossed the border.

Lettuce is not the only vegetable that’s mostly imported to Canada outside the summer months. In 2018, about $2 million worth of vegetables flowed north, everything from kohlrabi to kale. Like lettuce, the majority was grown in California or other southwestern states. 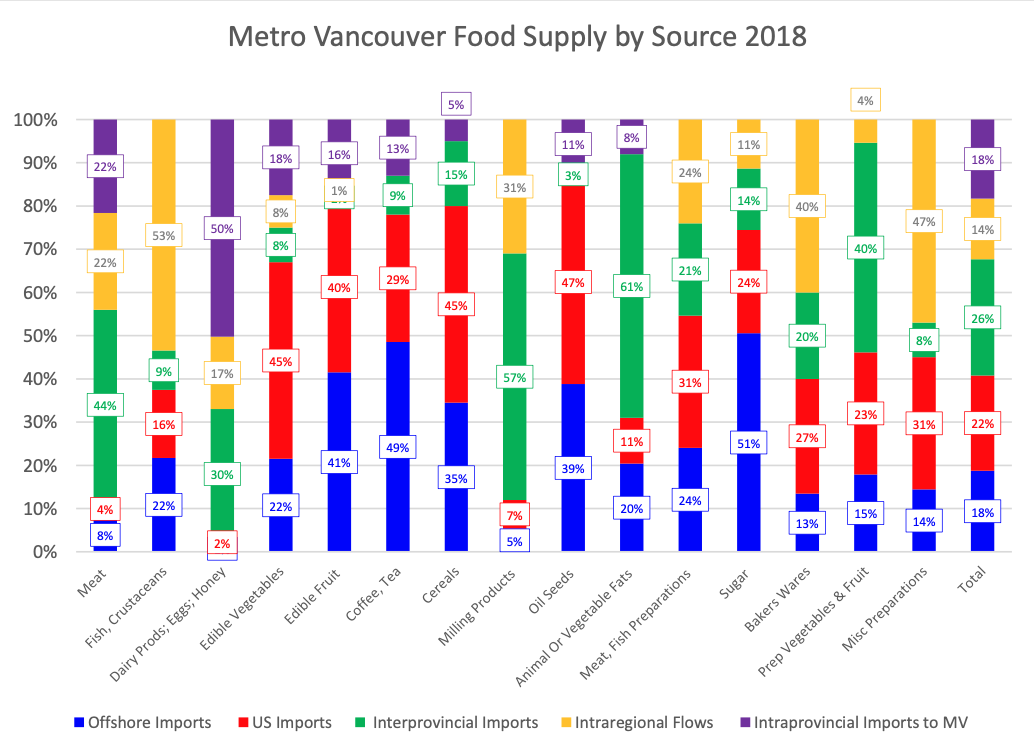 More than half the vegetables eaten in Vancouver came from abroad in 2018, with the majority arriving from the U.S. Graph by Davies Transportation Consulting with data from Statistics Canada

Cattle are pastured on the hillsides surrounding the Salinas valley. That means manure can be washed downhill, gather in the bottom of the valley and possibly contaminate surface water and groundwater. This water is used to irrigate the hectares of lettuce and other vegetables growing in the valley bottom.

“The current temporary import requirements, implemented on Oct. 7, (are) a preventative measure due to the repetitive outbreaks linked to California romaine lettuce over the past four years,” the Canadian Food Inspection Agency said in an emailed statement.

“The problem is nobody quite knows how the lettuce is becoming contaminated,” said @SafeFoodCanuck. “It could be the irrigation water, wild animals could run through the field and defecate. It’s hard to trace.” #foodsafety

The decision has received a tepid reception from American lettuce producers.

“Our producers will do their best to comply (with the new testing requirement) in an effort to continue shipping romaine lettuce to our valued trade partners in Canada,” the California Leafy Greens Marketing Agreement (LGMA), an association of shippers and handlers who adhere to shared food safety measures and are responsible for about 90 per cent of the leafy greens grown in the U.S., said in a written statement.

“However, this may not be feasible due to limited laboratory capacity. More importantly, product testing has not proven to be a reliable indicator of product safety.”

The organization is advocating for in-field testing instead of the post-harvest tests the Canadian government requires. It also said that recently implemented measures are sufficient to protect consumers.

The changes implemented by the LGMA classify irrigation water into categories depending on where it comes from, and how it will be used. Water used for overhead irrigation exceeds the U.S. Environmental Protection Agency’s “recreational standard” — clean enough for swimming. Water used for ground level or buried irrigation systems can fall below that standard.

However, that’s not enough, said Keith Warriner, a food security professor at the University of Guelph. He would like to see the water tested more frequently, similar to the weekly or daily water testing requirements many states require for water to meet their recreational standard - an unfair comparison said the LGMA.

“Comparing recreational water use and irrigation water use is questionable because swimmers taking a drink of the water they are swimming in is a very different risk profile than irrigating a crop that will then be exposed to the environment...before a consumer eats that product,” the organization said in an emailed statement.

Nor does post-harvest cleaning do much, Goodridge and Warriner agreed.

“We know that washing actually spreads bacteria,” Goodridge said. “You’ve got to think that these are big processing operations (that) could be receiving lettuce from many different fields all over the place. If you have one batch that’s contaminated, but you’re running other batches through (the same cleaning line) at the same time, they can all get contaminated.”

Tracing a leaf of contaminated lettuce from a Canadian consumer’s plate back to individual farms is impossible, he said, especially since it could be more than two weeks before someone gets sick from the lettuce.

Nor is the federal government’s approach perfect.

Lettuce from other parts of the U.S. could also be contaminated, especially if water standards for processing and irrigation aren’t any higher.

And testing isn't very accurate because it only captures a minute snapshot of the total lettuce shipment, Goodridge said. A better approach would be to push the industry to implement system-wide changes that would address the problems at their source, such as treating all irrigation water with chlorine, to help deal with the issue.

These are largely regulatory matters Canada can’t control, since water and growing standards fall under U.S. jurisdiction. Still, the economic pressure exerted by an import ban could help push the industry to implement changes of its own volition.

“You have to have regulation,” said Goodridge. “But, ultimately, it’s when the industry takes food safety seriously, as opposed to seeing it as a necessary evil, (that) we will really begin to address these ongoing outbreaks.”

Editor’s note: This article was edited on October 22, 2020, to clarify the water quality standards used for drip and ground-level irrigation and to correct details about the type of cattle farms that exist in and around the Salinas Valley.

All the more reason to grow

All the more reason to grow more of our own food at home. Market gardens in greenbelts around our cities brings growers and consumers a helluva lot close and makes the cost of the transport of fresh produce negligible. The distances rest perfectly within the common ranges of electric light trucks, so bringing produce to market can be done with a very small emission profile. This could be a job creation policy adopted by any government concerned about action on climate change and food security / safety.

Young farmers would have greater opportunities and lower costs of getting started, especially if they can avoid a large share of debt by leasing plots of land for a very reasonable price under long-term agreements with farm land trusts rather than purchasing a private farm independently. Farmers can collectively own a fleet of fully electric farm vehicles charged by a large-scale community-owned solar / wind power grid that sells excess clean power to the nearby urban grid, with farmers receiving share dividends supplemental to their farm family income. Conservation tillage and nutrient-fixing cover crops help ensure a major cut to equipment maintenance compared to conventional agricultural practices.

The potential is enormous, if only we can get over the typical Canadian reluctance to get started in something old, that is, to rid ourselves of the attitude that is takes modern industrial agriculture alone (large solar greenhouse operations being an exception) to get us through this pickle called climate change and an insecure imported food supply, and improve on old farming practices centred around co-operatives and shared labour and equipment.

Passive solar greenhouses are being perfected by the Chinese:

Active solar, with photovoltaic panels for direct power supply; solar hot water for heating supplemented by geo-exchange storage in the ground can also be included: