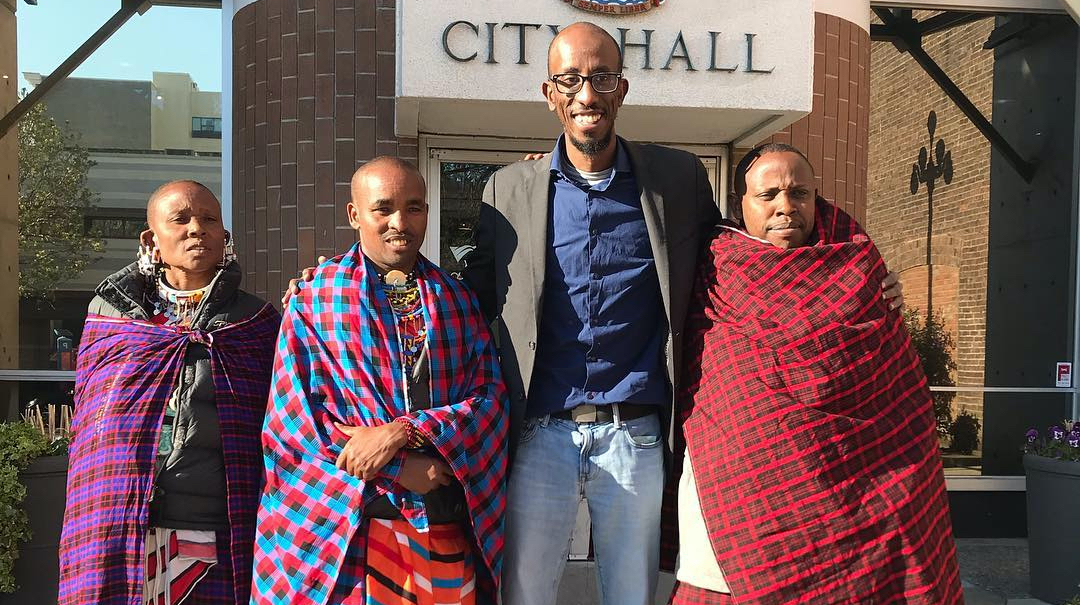 Sharmarke Dubow is a former refugee who fled Somalia when conflict over resource shortages led to civil war. He spent 20 years seeking a safe haven until Canada offered him a home. As soon as he was eligible to vote, he ran for office and won a seat on Victoria’s city council, where he is a champion for climate mitigation and justice issues.

Dubow has also served on the board of the Canadian Council for Refugees. My first appointment to interview him was postponed to allow Dubow to be with a member of the Somali community who was having a difficult time. His compassion and care shone through our conversation. His insistence on seeing the bright side is key to his obvious resilience.

Tell us about your childhood.

I have been on the move since I was eight years old. In 1992, Somalia was facing a resource scarcity exaggerated by climate change. People with power began attacking others to control the remaining water and wealth. We fled to a refugee camp in Mombasa, Kenya. My mother did not come with us. She was used to standing up for herself.

When my father took a second wife, she fought to divorce him and made her own way. She wanted to preserve our chances in our homeland. At age 12, when the camp closed, I moved to Ethiopia as an undocumented person and started middle school. I didn’t have access to school in the refugee camp and I had to work hard to catch up to my schoolmates.

In 2001, there were student uprisings and civil unrest in Ethiopia, and it was not safe to be a student, so I sought asylum in Cairo, (Egypt) where I lived with my aunt. I finished high school and enrolled in university. With the help of my older brothers, who paid my tuition, I got my bachelor’s degree in an interesting twist of fate from Cape Breton University’s Cairo campus.

"The moral place to start is to ask how our decisions will care for the most vulnerable," says Victoria Coun. @deardubow, a former refugee. "We must see government budgets as a moral compass. Where we spend money shows what we value."

How did you come to Canada?

In Cairo, I worked with non-profit organizations helping asylum seekers, migrants and refugee communities. But after the Arab Spring uprising, the combination of my humanitarian work and refugee status made me a target of the Egyptian military. The international community told us it was time to go “home.” But where was I to go? I had no country to call home. In 2012, Canada offered me a home. My refugee application was expedited because of my human rights work and refugee status, and my experience helped me find work fast with the Victoria Immigrant and Refugee Centre Society.

How did you come to seek elected office?

Victoria Mayor Lisa Helps saw me speaking up for migrants and suggested I run for council. I had never thought about running, but community organizers and grassroots organizations told me I could make a big difference for them as a city councillor. I am a young Black man, renter, transit user. Voices from identities like mine are underrepresented in politics.

Cities are where migrants come to build a better future. I know what it is like to be afraid in the face of displacement and therefore bring an authentic voice to many community concerns. Cities are at the heart of many wicked problems, including population growth, displacement, unaffordability and lack of housing supply, transportation, public health, income disparities, climate change, environmental degradation, racial and social inequities, disability justice, Islamophobia, public safety and public space concerns. My voice and others like mine must be at the city table to resolve the generational inequities between the haves and have-nots that are the foundation of many of these issues.

It is unusual to get elected on your first try. How did that happen?

Together Victoria is a group of citizens who endorse a slate of progressive candidates. They endorsed me and two other first-time candidates. We were all elected. I brought over 10 years of community development and was able to mobilize community groups that are often underrepresented and underserved.

What is your approach to leadership?

Leadership is authentic relationships with the community and working in partnership with community members. I take a power-sharing approach with co-governance, with care and compassion in order to create the space to listen to different perspectives.

How do you approach your work as a city councillor?

Governments exist to protect people, to offer care and work with the people to serve them. The moral place to start is to ask how our decisions will care for the most vulnerable. We must see government budgets as a moral compass. Where we spend money shows what we value. In a changing climate, how cities spend money can make their communities more resilient and more equitable.

Point to something in your city that makes you proud.

I am really proud that in Victoria, if you are under 19, transit is free. For an immigrant family with three kids, this is huge.

What is your advice to younger people who may see themselves in your story?

Be curious and look for relationships and mentors. I have lived so many years full of uncertainty and anxiety. I know how hard it is not to be able to move around freely, to have no faith in an economy, to doubt that governments care about you. My curiosity and relationships have grounded me and helped me through.

What about older people? How can they help?

I don’t advise elders. They advise me. I am so grateful to the multitude of elders that are active in this city for “ubuntu.” By choosing to act in ways that benefit your community, you are giving my generation great gifts. I am filled with gratitude.

What keeps you going? What gives you hope?

When I sit and look at the ocean, I feel a sense of mystery. When I see children playing in the shadow of caring adults, I can dream of a better world. I can hope.

‘Love, not fear, had motivated me’ to preserve the environment: Leah Davidson