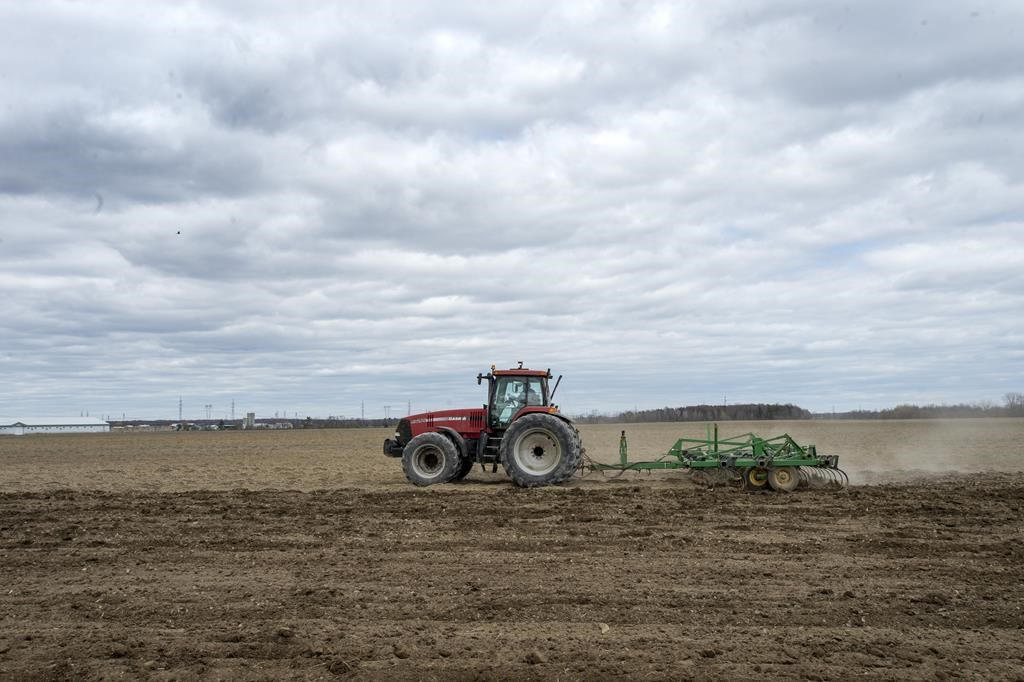 A farmer plows his field, on Tuesday, May 5, 2020 in St. Benoit, Quebec. File photo by The Canadian Press/Ryan Remiorz
Previous story
Next story

Nutrien Ltd. is calling on other members of the fertilizer industry to join its fight against climate change as it launches an agriculture carbon program to drive improved environmental sustainability and boost profits for farmers.

The Saskatoon-based company said Monday it plans to use its role as the world’s largest provider of crop inputs and services to help growers plan, plant and track practices to reduce greenhouse gas emissions, trap and store carbon and measure the resulting improvements.

It will then help farmers make money from their environmental efforts by facilitating the purchase and sale of carbon credits used by industries to offset their emissions and reduce carbon taxes.

"We really wanted to make sure that this was a rallying cry for the industry. We can't do it alone ... and we really need the agriculture industry now to step up to tackle climate change," said CEO Chuck Magro on an investor day webcast.

After years of study, Nutrien concluded the best way to encourage agriculture to help fight climate change is to create "a carbon economy," where most of the resulting value goes to the farmer, he said.

Nutrien will benefit indirectly by helping growers meet their carbon goals, he added.

"It's our people, our products, and our technology, that's going to drive, I think, a lot of this success, so we will naturally benefit by supplying services, products, technology, using our platform," said Magro.

Nutrien is to pilot its new carbon program in certain regions across North America in 2021 and plans to later take it to South America and Australia.

In a video presentation on the webcast, Nutrien showed how farmers will be able to track their improvements in environmental sustainability through its Ag Solutions digital hub, an online program that also allows customers to consult with Nutrien advisers, order products and services and pay bills.

Products that could be used to earn credits include crop protection inputs, biologicals, micronutrients and slow-release fertilizers, while practices such as no-till cropping and planting cover crops would earn credits by sequestering carbon, said Mike Frank, executive vice-president and CEO of retail.

#Nutrien Ltd. is calling on other members of the #fertilizer industry to join its fight against #ClimateChange as it launches an agriculture carbon program to drive improved environmental sustainability and boost profits for #farmers.

Nutrien should be committing to producing less nitrogen fertilizer if it really wants to slow global warming, he said.

"Generally, Greenpeace considers offsets a distraction from the focus on polluters reducing their emissions," Moffat said.

"In the case of Nutrien’s announcement, will this also be a distraction from the importance of shifting away from industrial and fertilizer-intensive agriculture towards organic farming?"

Demand for carbon credits has more than doubled since 2017, Nutrien said, citing a recent state of voluntary carbon markets report from Ecosystem Marketplace.

It says the global market for carbon offsets is expected to increase by 40 to 100 times by 2050.

In 2019, Nutrien became one of the first users of the Alberta Carbon Trunk Line, a project that collects carbon dioxide from its fertilizer plant northeast of Edmonton and other industries and transports it to mature oil and gas reservoirs for use in enhanced oil recovery and storage.

This report by The Canadian Press was first published Nov. 30, 2020.

Companies in this story: (TSX:NTR)