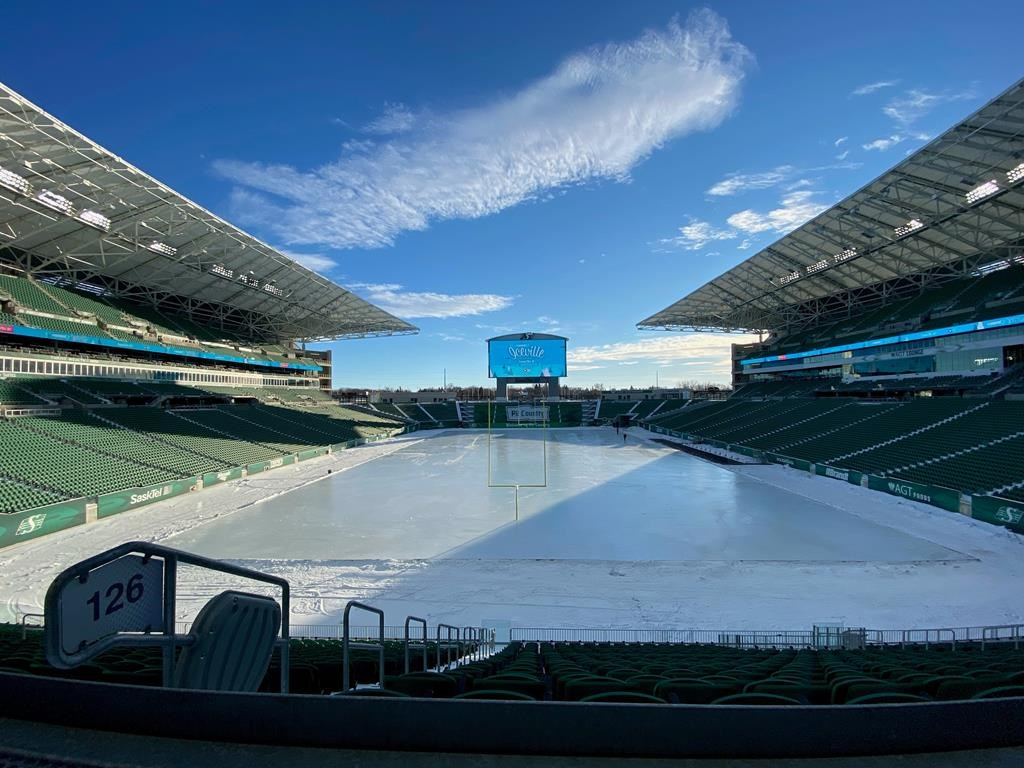 A skating rink is shown at Mosaic Stadium in Regina in this recent handout photo. Handout photo by The Regina Exhibition Association/Sabeen Ahmad
Previous story
Next story

The operators of Regina's Mosaic Stadium have come up with a novel way to give people who want to skate plenty of space for social distancing.

On Monday, out of the blue, the Regina Exhibition Association announced it had flooded the surface of the field where football is normally played, and was taking reservations for free public skating sessions that will begin on New Year's Eve.

The field, which is home turf for the Saskatchewan Roughriders, had a hockey rink on it in October 2019 for the NHL Heritage Classic game. But this time the ice surface is six times larger and covers the entire field.

President and CEO Tim Reid said workers have been setting up the outdoor rink, dubbed "Iceville," all December, but the organization didn't publicly announce they were doing it.

"We kept it relatively quiet because we weren't entirely sure we could do it," Reid said in an interview Monday, noting that it wasn't all that hard to keep a secret.

"Not many people want to go check out a CFL football stadium in the heart of winter."

Reservations are required for the 45-minute sessions, and a maximum of 30 people can be on the ice at any single time.

Sports such as figure skating, hockey and ringette are not allowed. Neither are personal listening devices, because skaters can't hear others skating near them or respond to emergencies.

Groups of six are allowed, but skaters are required to maintain two metres from other groups. Masks aren't required because it's outdoors, but the Exhibition Association still recommends them.

The operators of #Regina's Mosaic Stadium have come up with a novel way to give people who want to skate plenty of space for #SocialDistancing. #Covid19 #skating

"They really like this idea because it actually could be controlled," he said.

After only a couple of hours of taking reservations on Monday, Reid said they were completely booked up to Jan. 5. It's anticipated the ice will be open until Feb. 28.

"I think having the opportunity to go for a skate at Mosaic Stadium is a little bit of positive that many of us could use right now," Reid said.

— By Rob Drinkwater in Edmonton

This report by The Canadian Press was first published Dec. 28, 2020.