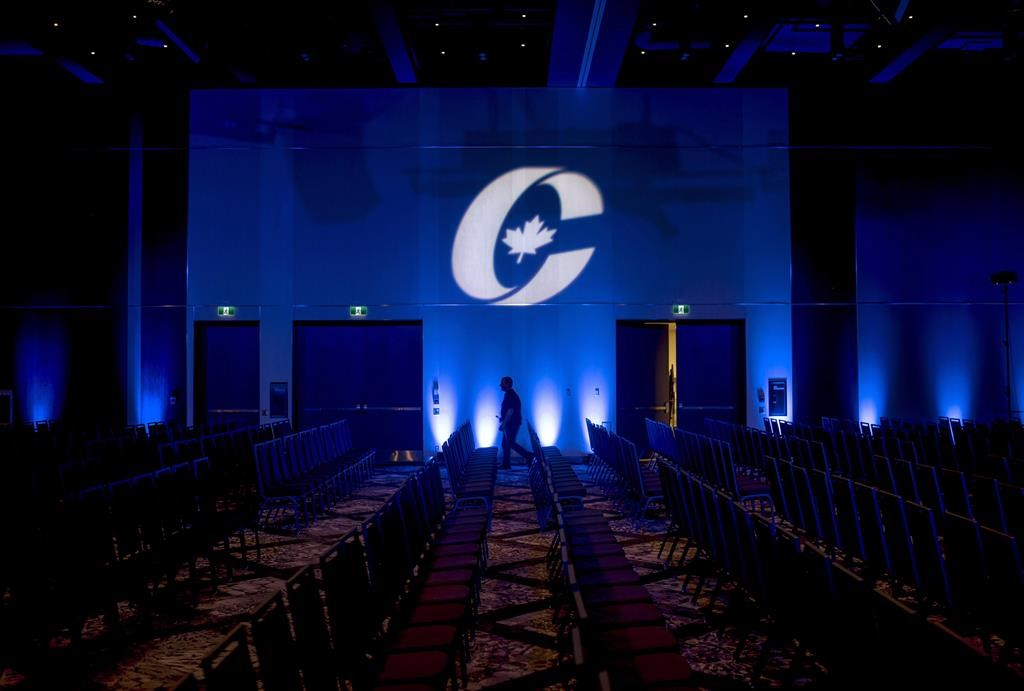 A man is silhouetted walking past a Conservative Party logo before the opening of the Party's national convention in Halifax, on Thursday, Aug. 23, 2018. File photo by The Canadian Press/Darren Calabrese
Previous story
Next story

The Conservative party's use of CBC news footage in a partisan attack ad and tweets was a copyright infringement damaging to the public broadcaster's integrity and impartiality, Federal Court heard Thursday.

In submissions to the court, CBC lawyer Andrea Gonsalves said the federal Conservatives exploited the very qualities that make the CBC a trustworthy source of information.

"The works in issue are the products of CBC's skill and judgment; they reflect its high journalistic standards, practices, efforts and ethics," Gonsalves said. "The use and the unfairness of the use poses a real risk of eroding CBC's trustworthiness and reputation in the eyes of the public."

At issue are a Conservative ad and tweets from the 2019 election that used clips from CBC news programming and other outlets and from the leadership debates. The ad, for example, showed a short clip of Prime Minister Justin Trudeau asking the viewer to "look at what we’ve done" along with news clips that invited unfavourable conclusions about his performance.

The broadcaster, which maintains the issue is of wider public importance, wants Judge Michael Phelan to find a violation of the Copyright Act. The Conservatives want the case dismissed.

It is the first time a Canadian court has been asked to adjudicate a copyright dispute between a news organization and a major political organization, court heard.

A major problem is that the impugned material ignores the professional efforts that went into getting it to air, Gonsalves said. The Conservatives manipulated the material for their own purposes in a way that did not reflect the original context, she said,

“That’s antithetical to the very reason that material was created in the first place,” Gonsalves told court. “The use of the materials here degrades CBC's journalistic work by deploying it to partisan ends.”

Phelan wondered about the widespread use of a famous clip of former prime minister Pierre Trudeau saying "just watch me,” when asked about the lengths he would go to to combat Quebec separatist violence.

Gonsalves called this situation different given the amount of work, planning and professional judgment and skill that went into creating the various segments. The Conservatives, she said, deliberately exploited those efforts and the trust people have in the CBC.

For their part, the Conservatives called the action "ill-conceived," saying there was no evidence the CBC suffered any damage.

The Conservative party's use of #CBC news footage in a partisan attack ad and tweets was a #copyright infringement damaging to the public broadcaster's integrity and impartiality, Federal Court heard on Thursday, February 11, 2021. #CPC

"There has been no detrimental effect," party lawyer Casey Chisick said.

The snippets of news footage, the party argued, was intended to illustrate the failings of the Liberal government under Justin Trudeau. The ads and tweets did not use a "substantial part" of the CBC's work and qualify as "fair dealing" under the act, Chisick said.

The party, which took the material down after the broadcaster complained, also accused the CBC of displaying the very kind of bias it claims not to espouse.

"What this amounts to is the CBC complaining that it doesn’t want to be associated with the Conservative party," Chisick said.

The lawyer noted CBC dropped journalists Rosemary Barton and John Paul Taskera from the litigation after their inclusion in the initial filing sparked a backlash.

“This is really an attempt by the CBC to assert moral rights that it doesn’t have,” Chisick said of the claim.

The hearing is scheduled to wrap up on Friday.