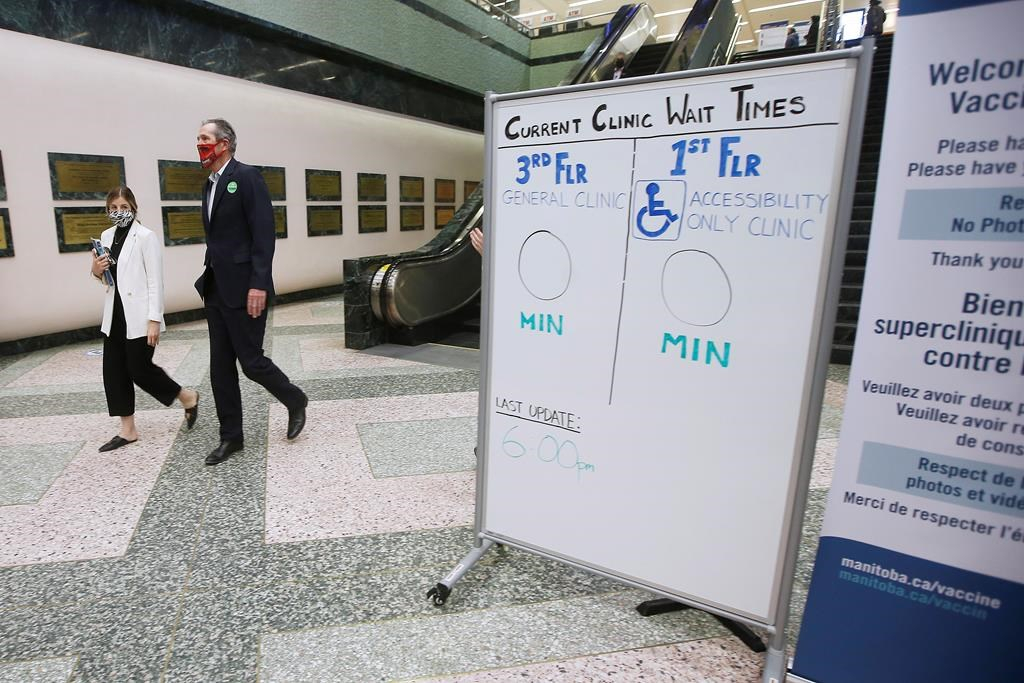 Members of the military are being deployed to Manitoba where surging COVID-19 cases have overwhelmed the health-care system, while all provinces are being urged to use up doses of the AstraZeneca vaccine before they expire.

The province's intensive-care units are so full that 23 critical patients have been transferred to Ontario.

The Canadian Armed Forces members are to start a four-week mission Friday, which will include critical care nurses and lab technicians.

Meanwhile, federal Health Minister Patty Hajdu has written to provincial and territorial leaders encouraging them not to waste thousands of doses of Oxford-AstraZeneca vaccine that are due to expire in a few days.

It's not clear how many doses are at risk of going to waste, but Ontario is scrambling to use some 45,000 AstraZeneca shots by the end of May, with another 10,000 set to expire in June.

Quebec officials announced that province will shorten the delay between first and second doses of the AstraZeneca vaccine to eight weeks from 16 weeks. Second doses are to start being administered at walk-in clinics on May 29.

The province has 148,100 doses of AstraZeneca in stock.

Quebec reported 436 new cases of COVID-19 and 10 more deaths as the number of hospitalizations continued to drop.

Feds send military to #Manitoba where #COVID has overwhelmed hospital #ICU and urge provinces to use all AstraZenca #vaccine before they expire.

Ford said he has written to experts and education stakeholders asking for input on whether it's safe to have children back in classrooms.

Schools have been shut in Ontario since April amid a devastating third wave. But infections there have been steadily declining in recent weeks.

As provinces lay out their plans to reopen, officials have said success hinges on getting people vaccinated. A new report from Statistics Canada found that more people are getting on board with getting a shot.

The report, based on data collected by the Canadian Community Health Survey, found in January and February of this year that 82 per cent of Canadians aged 12 and older said they were somewhat or very likely to get the vaccine.

That was slightly up from 80 per cent at the end of last year.

Vaccine willingness was highest in Newfoundland and Labrador and British Columbia.

This report by The Canadian Press was first published May 27, 2021.