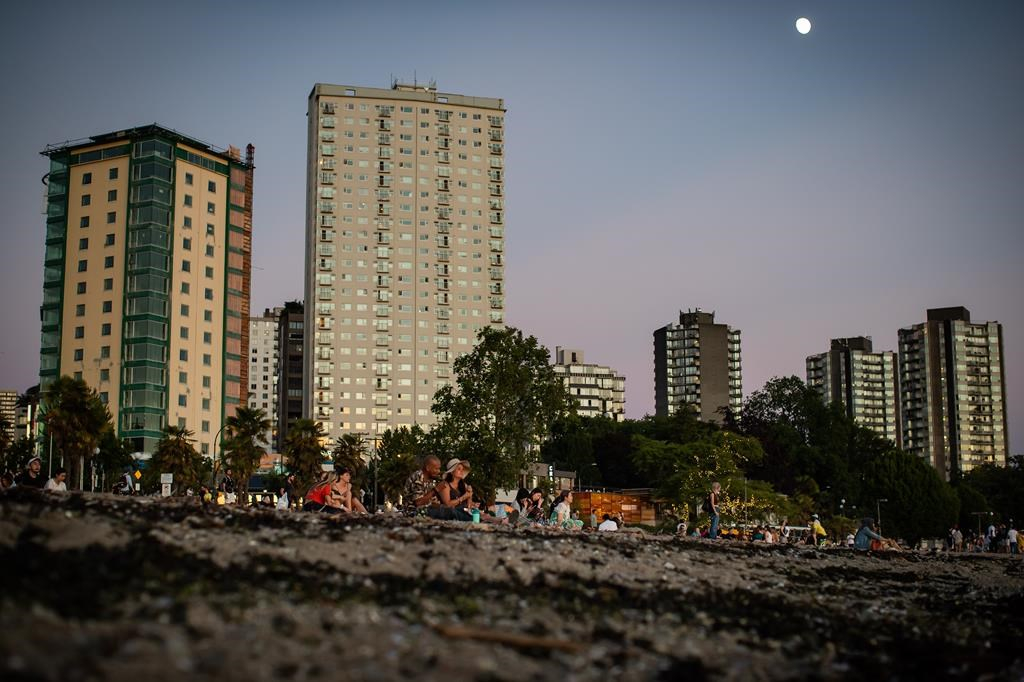 People sit on the sand at English Bay Beach amidst a heat wave in Vancouver on Monday, June 21, 2021. File photo by The Canadian Press/Darryl Dyck
Previous story
Next story

Jeremy Cain spent Thursday overseeing a team of outreach workers in Kamloops, B.C., in a race against an impending heat wave that he worries will put the city's already vulnerable community members at even greater risk.

Their cars are loaded with water bottles and sunscreen that they plan to distribute around the city over the next week with temperatures set to soar to 40 C and beyond by Saturday as part of a near-provincewide heat wave.

"I've lived in this community my whole life and the temperatures they're calling for are alarming to any person in the general public, these are extreme temperatures where anyone can come to harm," said Cain, who is director of outreach and clinical support services for ASK Wellness Society.

For those living on the street or who have severe mental health or substance use issues, the concern is even greater. Some of those individuals won't have the capacity for self-care, will experience the dangers associated with substance use amplified or won't have access to shelter and other ways to keep cool, he said.

"Those individuals will always suffer disproportionately from the elements," he said.

He encouraged members of the public to keep those people in mind and call emergency services if you believe someone is in distress.

Cain is part of an ad hoc network of community organizations, municipal governments and health agencies doing what they can to prepare for what Environment Canada warns could see record-setting temperatures starting Friday and continuing into next week.

The weather office says an exceptionally strong ridge of high pressure will stall over the province, raising temperatures in parts of the Fraser Valley, Fraser Canyon and southern Interior to 40 C or higher by Sunday or Monday. Elsewhere, the mercury will nudge the high 30s and forecasters say humidity will make conditions feel even hotter.

Sweltering heat is expected to continue through Tuesday for most of B.C., but forecasters say inland sections of the north and central coasts won't see any relief until Thursday.

The unseasonable temperatures will likely cause other weather-related problems, Environment Canada warns. It says river levels will rise due to glacier melt, increase the risk of wildfires as forests dry out, and boost the potential for illnesses linked to heat or air quality as the high-pressure lid traps stagnant air over much of B.C.

The City of Kamloops is offering residents temporary relief by turning an arena into a cooling centre. In keeping with COVID-19 protocols, the Sandman Centre will be limited to 50 people at a time and those inside will be required to wear masks and practise physical distancing.

Vancouver has installed eight misting stations and 10 temporary water fountains, while circulating a list of recreation centres, public libraries and other air-conditioned buildings where members of the public can cool down.

The City of Penticton is also publicizing locations of accessible water, while reminding those going into the backcountry that a fire ban is in effect to prevent wildfires.

"We encourage both residents and visitors to continue monitoring weather forecasts, and follow the advice of Health Canada," Mayor John Vassilaki says in a statement.

"Please drink plenty of water, wear a hat and use sunscreen, stay in the shade, go for a dip in our lakes and check in on your friends, family, seniors and neighbours. Be safe and responsible during the coming heat wave."

Symptoms can include dizziness and fainting, nausea and vomiting, rapid breathing and heartbeat, or extreme thirst, she said.

Watch out for red flags such as symptoms that aren't improving with self-care, very hot and dry skin, loss of consciousness or confusion, she said.

"If at any of those points, someone should seek medical attention," Newhouse said.

People who are extra vulnerable include seniors, young children, those with chronic diseases or mental illness, the underhoused or homeless and those who work outside.

Anyone who is housebound without air conditioning and lives alone is also particularly at risk, she said.

To cool down, Newhouse suggested a cold shower, cold washcloth, misting cool water, closing blinds, going to another location that has air conditioning, hitting a swimming pool or finding shade.