Over the last six months, Canada's National Observer has been looking into what's working and what's failing in cities across Canada as they rise to the challenge of fighting climate change. In a 13-part series, we will be taking you across the country, province by province, for a look at how cities are meeting the climate emergency with sustainable solutions.

Everything is very local here. We don't go anywhere. We grow the food here, we compost food here and we sell the food here.

Flanked by grey apartment towers and a busy multi-lane highway, the Burnhamthorpe Collegiate Institute high school in Etobicoke isn’t the first place that you’d expect to find rows of crops.

It’s the location for one of Toronto’s new urban farms, which provide food to communities without access to fresh produce and reduce carbon emissions.

“Everything is very local here. We don't go anywhere. We grow the food here, we compost food here and we sell the food here,” said Orlando López Gómez, the fast-talking and energetic co-ordinator at FoodShare Toronto who manages the farm.

When it’s operating, residents bring organic waste and receive tickets they can use to buy food at the local market. The waste becomes soil to grow food, creating a “closed loop” system where soil becomes food that becomes soil again. A bucket of food waste earns a resident $3, while a bunch of carrots sells for $1.

López Gómez has experience with agriculture in much more challenging conditions. Before emigrating to Canada in 2011, he worked in water conservation and forestry for the Nicaraguan government and with a local non-profit. Nicaragua has seen worsening droughts and unpredictable rainfall as the result of climate change, so he often travelled to rural agricultural areas to advise farmers on planting trees and reducing the use of pesticides.

He arrived in Canada without knowing any English, but quickly learned and applied his experience in Toronto. “I miss the names of all of the tropical trees in Nicaragua. You cannot find them here in Canada, so I need to adapt to everything here and start to study all of the new trees in Canada,” he said.

He found a wealthier country, but one with pockets of dire food insecurity. Black Canadians, for example, are three and a half times more likely to experience food insecurity than white Canadians. “It's scary that in a rich city like Toronto that we have those situations, especially right now with COVID-19.”

Food systems also contribute to climate change. In Canada, food and drinks accounted for around a quarter of household indirect emissions in 2015 — a total of almost 44 million tonnes. The farther food travels, the more emissions are associated with it. That year, 70 per cent of crop production emissions were associated with exported products, according to Statistics Canada.

Ontario's goal remains to reduce emissions by 18 megatonnes by 2030.

Where emission reductions and urban gardens meet is primarily in the area of transportation, which produces about a third of Ontario’s total greenhouse gas emissions. Much of the reduction efforts in that area will stem from the shift to electric vehicles. While electric cars are already on the production line, it will take longer to transform the truck transport industry to electric or hydrogen-powered vehicles. So growing food closer to home really makes a difference.

Farms like the one López Gómez operates help in other ways as well: they reduce the amount of food waste, reduce the length of supply chains and, in the case of a compost, sequester carbon in the soil that would otherwise get released as methane in a landfill. The compost exchange at FoodShare’s farm in Etobicoke, for example, resulted in savings of about 498,000 pounds, or about 226 metric tonnes, of carbon emissions by diverting food waste and carbon materials, such as wood chips and sawdust, from the landfill.

“That never stops. It was mouth to mouth. That is meaning that people are looking for this food in this area,” López Gómez said.

Food sharing has a long history in Toronto. In 1985, Toronto Mayor Art Eggleton proposed the creation of FoodShare Toronto to address a hunger crisis in the city. At the time, it was a city hall hotline taking calls from people who wanted to donate food as well as those in need. The organization has launched many more programs in the years since, from “Good Food” delivery boxes filled with local vegetables to food literacy programs to pop-up food markets for communities without a local grocery store.

The organization provides a model for reducing food waste. In 2019, FoodShare managed about 1.7 million pounds of food and wasted only around 43,000 pounds in 2019, or around two per cent. Canada’s food system as a whole fares much worse — 58 per cent of food is wasted each year, according to a 2019 report by Second Harvest. The waste happens as grocery stores dispose of imperfect food, restaurants throw out food left on plates and households buy more food than they can eat.

Toronto's latest food and urban farming trend involves repurposing hydro corridors into urban farm strips, turning former wasteland into an important source of fresh, local food for neighbouring residents. Flemingdon Farm is situated along a hydro right of way in Flemington Park, a North York neighbourhood where about 35 per cent of residents fall under Canada’s poverty line and almost 70 per cent have a mother tongue that is not English. A second farm is underway in an east Toronto hydro corridor in Morningside Heights. 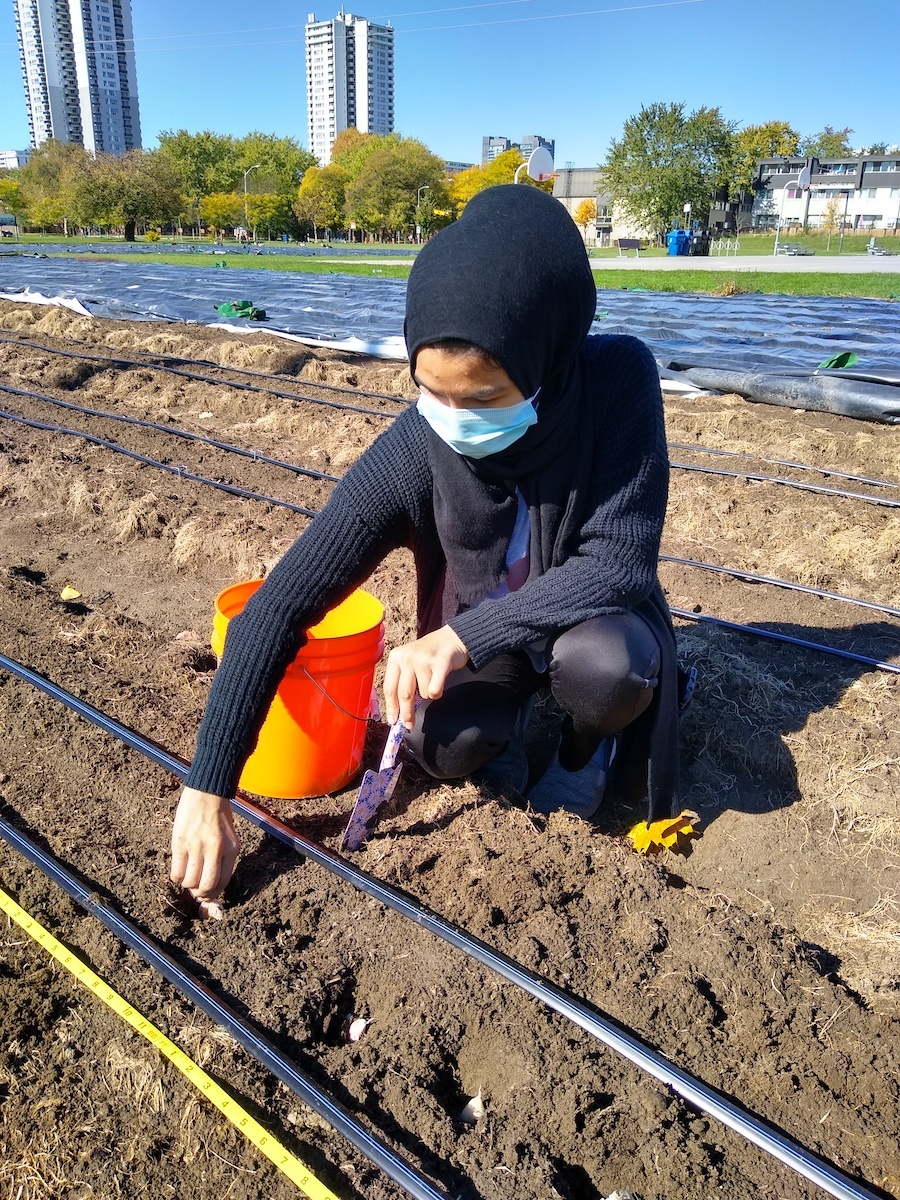 Growing and delivering fresh produce to people nearby saves on carbon emissions from transportation and lowers health costs, organizers point out. “There are a lot of chronic diseases in the community, like hypertension, like diabetes, like obesity,” says Mussarat Ejaz, a physician leading the Flemingdon Park project.

Fast food is much more readily available and often cheaper than healthier options, she says. “If they have access to healthier food and know the benefits of healthier food, they will probably try to make those healthy lifestyle changes as well.” The farms also allow residents to grow culturally specific foods that are hard to find in grocery stores, she added.

Vegetables from the farm sold at an on-site market in 2019. School Grown at Burnhamthorpe Collegiate Institute is not only an urban agriculture program but also a youth employment opportunity and farm education initiative. Photos by FoodShare staff

Making use of unused space

López Gómez, ever indefatigable, plans to set up another compost exchange at the Flemingdon Park farm when it’s ready.

“We believe this can be happening in every single farm in organic spaces,” he says. “If you want to be a farmer or grower or gardener, your first priority is to have healthy soil.”

Tell me, ‘Go and weed these beds,’ and I will spend my beautiful day weeding.

Toronto has plenty of unused spaces that could become farms in the right hands. At the farm in Etobicoke, a neglected concrete tennis court next to the high school has become a composting area with mounts of dirt and wheelbarrows, while an unused field has been converted into an area for crops and an irrigation system. Eventually, López Gómez hopes to plant trees along the border of the highway to shield the farm from the noise of speeding cars.

Now that he mostly does administrative work, he misses farming. He grew up on a farm in Nicaragua — he left for outside opportunities while other siblings stayed to work with the family — and when it’s warmer, he likes to get out to the Etobicoke farm at least once a week.

“I come for a couple hours and say, ‘I am ready to work,’” he said. “Tell me, ‘Go and weed these beds,’ and I will spend my beautiful day weeding.”

As López Gómez weeds and digs buckets of compost into the ground, he'll be helping to divert compostable material from area landfills, which reduces potent methane emissions and adds nutrients to the soil to keep the growing cycle turning. He may not think of precisely those things when the sun is shining and his hands are in the dirt. For López Gómez, as for many gardeners, the satisfaction is the physical sensation of the work and the reward of watching things grow.

We want to do more stories on cities across Canada.

In Sackville, N.B., students demanded climate change solutions, and they got what they asked for

(p.s. I am not sure if I have this confused but I think Lopez Gomez are two last names. idk if you can make a correction to include his first name, Orlando and his first last name? From a Latin American user, it makes more sense)

Hi Alejandra, thanks for

Dana Filek-Gibson | Mon, 07/19/2021 - 15:36
Hi Alejandra, thanks for reading and commenting! I'm really glad you enjoyed the article. About the last names, you're correct: the FoodShare Toronto co-ordinator's full name is Orlando López Gómez. Usually, our style is to use a person's full name the first time we mention them and then their last name(s) for every mention after that. So in this case, we introduce him as Orlando López Gómez and then use López Gómez when he comes up again in the story. I hope this helps to clarify; please let me know if it's still unclear.