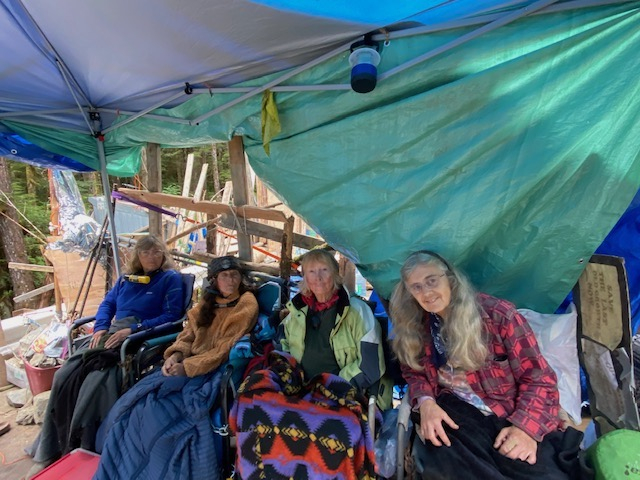 Four women in their 70s chain themselves to the Bridge of Matriarchs in protest of old-growth logging in Fairy Creek. Photo by Carrie Saxifrage
Previous story
Next story

At the protest base camp at Fairy Creek, where “land defenders” have been stopping the logging of old-growth forest for over a year, two young women limp in from River Camp — the last stronghold seven kilometres up the logging road, the camp closest to the ancient trees. One of them is in socks. She tells us: “The RCMP stomped my feet and took my shoes.”

Rainforest Flying Squad organizer Luke Wallace (camp name Singer) tells me the RCMP has been pushing protesters out all week, dismantling camps and impounding possessions, including cars. A lawyer, Elizabeth Strain, has corroborated this: Many cars are impounded on the property of Teal-Jones, the forest company that plans to log Fairy Creek. According to one vehicle owner whose car was impounded, the company charged a $2,500 “damage fee” to release the vehicle and required personal information that may be used in a suit for additional damages.

I want to see the last remaining camp and witness the Bridge of Matriarchs, to which four women in their 70s have chained themselves. RCMP media officer Gilles Deziel offers me a ride at some undetermined time. Instead, just after dawn Saturday morning, I begin walking.

It’s half a battlefield, half a haunting. At the half-kilometre mark, a huge bundle in a gravel pit holds the belongings of protesters. Deziel says the RCMP is only legally required to tag and return the belongings of arrestees. People moved rapidly out of areas by officers have “abandoned” their belongings.

Next, I find the protesters’ headquarters. Last week, it was the main camp — full of singing, banjos, and food. Now, a mess of wood chunks and wrecked gear lines the road. Soon, I’m at Red Dress Camp, a tribute and reminder set up by protesters of the murdered and missing Indigenous women and girls. I feel the ghosts of missing voices.

An RCMP helicopter circles as I pass a line of empty cars, some with windows broken — by the RCMP, according to protesters. At least the owners of these cars may get their vehicles back without a fine.

I reach River Camp in two hours. It bristles with signs, tents, and about 50 people: Indigenous, Black and white, most of them young, fit, and completely exhausted. Many have spent the night building barricades. The camp looks well-lived in, loved and decorated, with a sturdy kitchen built of rounds and plywood, shelves covered with food. The protesters talk about what is to come when the RCMP arrives. Nearly every protester has a story of police brutality, intentional infliction of injury — the bent-back thumb, the knee to elbow, wrist, or neck. They say protesters who are Black, Indigenous, or people of colour are plucked from groups for particularly harsh treatment.

When I ask Deziel, the RCMP media officer, about allegations of excessive force, he denies it. In a release last week, police said: “Officers have taken many precautions to ensure that all protesters are removed from (devices like tripods and other structures) as slowly and safely as possible.”

At the Bridge of Matriarchs, four women in their 70s smile and chat in lawn chairs. They’re bicycle-locked and chained to the bridge. “My grandchildren are Ahouset,” Aurora tells me. “They’re too young to be there, so now I’m their grandma, too.” She points to the tent where two young Indigenous women rest.

At the Bridge of Matriarchs, four women in their 70s smile and chat in lawn chairs. They’re bicycle-locked and chained to the bridge. #FairyCreek #BC #RCMP #OldGrowth

Black Fly, a 70-year-old Métis woman from Saskatoon, tells me she’s here to support the Land Back movement. Cookie, a full-time potter from Nanaimo, started coming six months ago to cook before she moved in. She, too, feels very protective of the young women in the tent.

Fifth Grader brims with excitement. “Fairy Creek is as crazy as it can get,” she says. “The people here are amazing.” When she’s older, she’s going to come back to point out all the places where things happened. “Yep, this is where I protested, this is where this camp was, this is where the action happened.”

Her father, Woodchuck, tells his part, how they came so he could teach her about citizenship — but she jumps in: “I made you take me here for my birthday!”

As I watch, the camp prepares against the RCMP.

Lady Chainsaw, an Indigenous woman, positions her wheelchair at the front edge of the camp. They’ll have to take her first. Behind her, a young man settles into a green tarp on a tripod 15 feet above the ground. Two women dig themselves into Sleeping Dragons, arms chained and in tubes dug into the soil. A man chains himself to the kitchen roof and begins to drum. It feels so serious — but there is singing and dancing for the friends who are risking arrest.

Suddenly, the RCMP are walking through the camp. Officers herd protesters away from the young people chained to structures. It’s my right as accredited media to watch the arrests, the extraction methods, but they push me back, too. I read from a July 20 court ruling on access to the injunction zone as I'm pushed along: “(T)he RCMP will be reminded ... (of) the necessity of avoiding undue and unnecessary interference with the journalistic function when police make operational decisions…” but they aren’t listening. They keep herding me away from Lady Chainsaw and the others.

All afternoon, the Mounties throw protesters’ gear into huge bags. An excavator pushes down the kitchen. A helicopter arrives, collects the bags, blows dust along the road to the Bridge of Matriarchs. As I turn to leave the ruins of the ephemeral village, I take one last look at the brave women chained to the bridge.

Down near the highway, I glimpse Fifth Grader and her father, in his camper van. She looks sad, head against the window. It’s a hard image, one that will stay with me. I’m glad she will be cheered by the crowd at base camp. I bet her father’s glad, too.

I am sick that this is not in

Horgan's ndp is a travesty to its socialist citizen roots.

More support that the RCMP

More support that the RCMP should be defunded and disbanded.