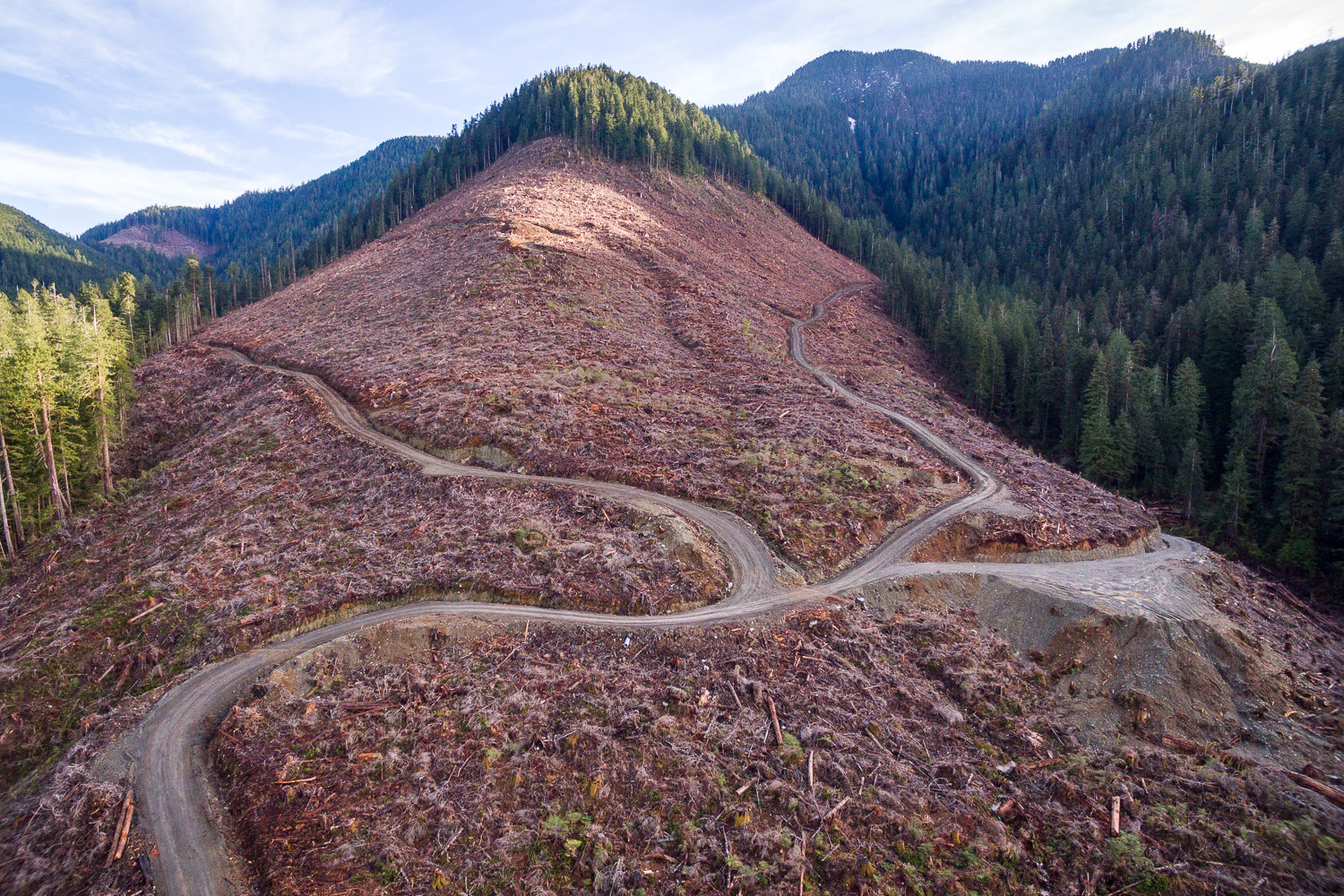 Clear-cut logging of massive trees by Teal-Jones along the Caycuse watershed on Vancouver Island. Photo by TJ Watt
Previous story
Next story

I am grateful to live and work on the traditional, ancestral and unceded territory of the xʷməθkʷəy̓əm (Musqueam), Sḵwx̱wú7mesh (Squamish), and səlilwətaɬ (Tsleil-Waututh) First Nations.

We have just passed the one-year anniversary of logging protests in Fairy Creek.

Kids, parents, seniors, professionals, and a lot of people who had never taken part in a protest like this are lining up in record numbers to defend a forest on southwest Vancouver Island. Images of protesters and the RCMP doing battle have made B.C. infamous as the protests passed a painful milestone last month, becoming the largest act of civil disobedience in Canadian history, surpassing the Clayoquot Sound protests, which took place nearly three decades ago.

This apparent inconsistency is a picture-book example of greenwashing — particularly the creative use of the words “sustainable forestry.” This phrase traces its roots to 18th-century Germany when it meant “sustained yield” or “sustained logging.” Back then, forests were a crop to be harvested and replanted successively.

This is a far cry from a modern definition of sustainable forestry, such as the one developed at the 1993 Ministerial Conference for the Protection of Forests and adopted by the United Nations. This definition recognizes forests serve society in essential ways beyond supplying timber. This includes purifying our water and air, moderating floods, providing food and medicines, and providing habitat for wildlife.

By this definition, “sustainable forestry” means using forests in a way — and at a rate — that maintains their biological diversity, productivity, and regenerative capacity to fulfil, now and in the future, ecological, economic, and social functions.

Fairy Creek tells us clearly which definition of “sustainable forestry” is actually in use in B.C.

Opinion: Fairy Creek tells us clearly which definition of “sustainable forestry” is actually in use in B.C., writes @DevonPage5 of @ecojustice_ca. #FairyCreek #BCpoli #Logging #OldGrowth

These forests would normally be at least 80 per cent old-growth (forests more than 250 years old) and would have towering ancient trees, a rich understory, and complex habitats unique to ancient ecosystems.

Just 10 per cent of old-growth was left at last count in 2009. By now, Fairy Creek forests are likely closer to the provincial average of three per cent remaining old-growth. This falls far outside the modern definition of sustainable forestry.

But if your business is logging old-growth, pointing out that logging in Fairy Creek meets Canada’s definition of “certified sustainable” is good for the bottom line. And that’s the point.

In the wake of the Clayoquot Sound protests, Canada's forestry industry needed a serious rebrand. “Certification” was seen as a way to help Canada market itself as a world leader in sustainable forestry, and the CSA was a ready partner.

It worked. Post-Clayoquot, Canadian governments and the forest industry went on a charm offensive and — backed by “certification” — restored Canada’s reputation and markets.

It did not matter that the certification contained no hard and fast rules requiring sustainability. The B.C. government went one step further, entrenching industry standard-setting and self-regulation in its forestry laws. In these laws, the government also moved to expressly limit factors like wildlife habitat protection that might slow the rate of logging.

That’s a key reason why the last time government biologists looked, they could find only two old-growth-dependent spotted owls in the wild.

It’s also why B.C.’s forest industry is declining. Years of overcut have led to what the government calls a “fall down” — a necessary reduction in the amount that can be logged annually. Since 2000, 35 sawmills have closed and B.C. forestry jobs have declined by half.

Yet, including Fairy Creek, more than 1.6 million hectares of B.C. forests are slated to be logged under the CSA’s sustainable forest management standard.

Forestry in B.C. will never be sustainable until government and industry stop greenwashing.

Earlier this summer, on behalf of six B.C. citizens who represent forestry, industry, tourism, environment, and Indigenous interests, Ecojustice submitted a complaint to the Cartels and Deceptive Marketing Practices Branch of the federal Competition Bureau asking it to investigate the CSA’s false and misleading statements about its forestry certification standard.

We hope by seeking a large fine, we can deter B.C. industry and government greenwashing about so-called sustainable logging.

Until then, if someone asks you if B.C. logs sustainably, just point to Fairy Creek.

Devon Page is the executive director of Ecojustice, Canada’s largest environmental law charity. He obtained the first injunction in Canada to stop logging in old-growth forests home to the northern spotted owl.