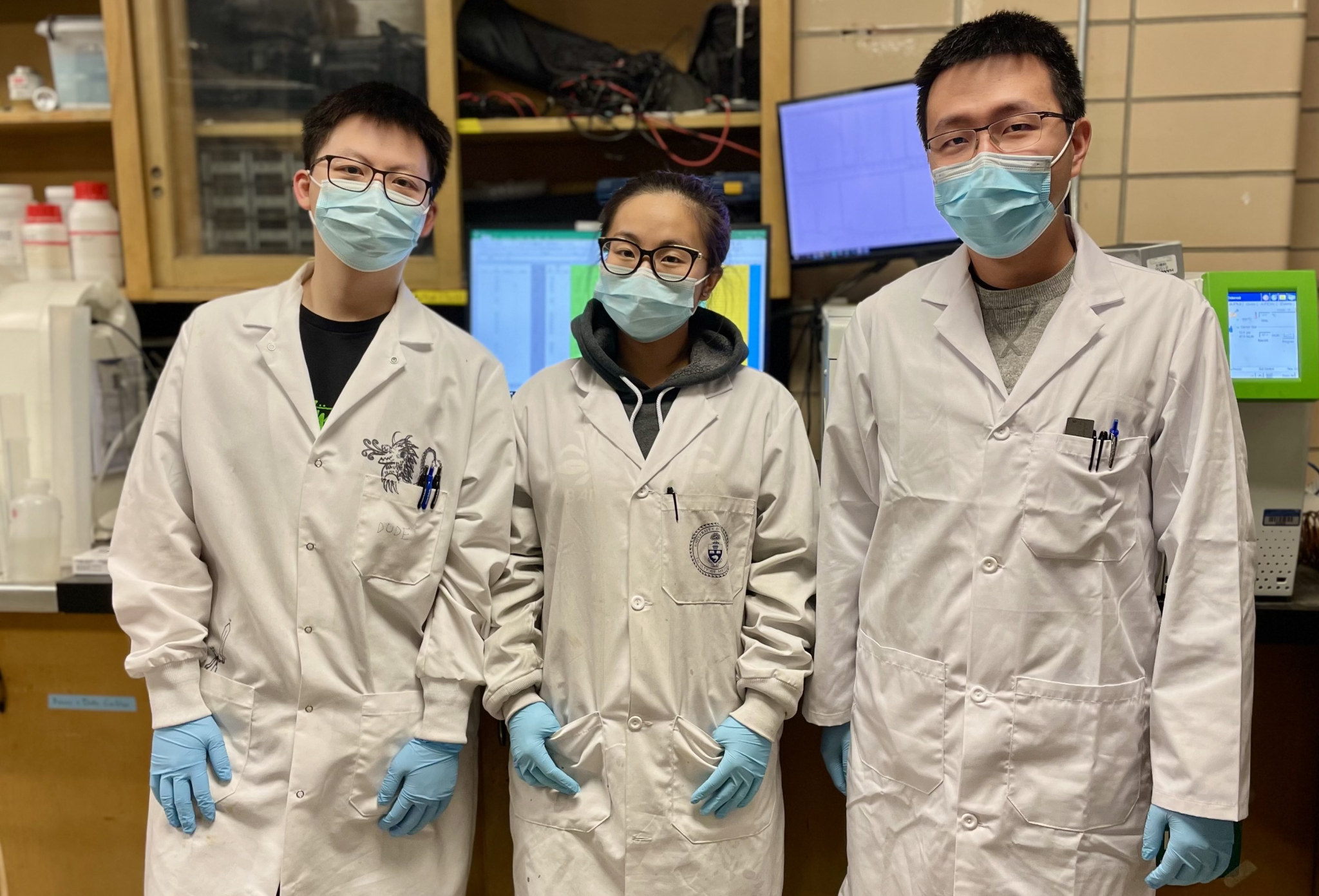 From left: Shijie Liu, Celine Xiao, and Yi (Sheldon) Xu in the lab where they are working on carbon capture technology. Photo by Yong Zhao
Previous story
Next story

Postgraduate engineering students Celine Xiao and Shijie Liu and their University of Toronto research team just won $250,000 for their efforts to capture carbon dioxide from the atmosphere and isolate it using only electricity.

The team, which formed E-quester earlier this year, says if scaled and coupled with a renewable source of energy, its method of carbon capture could contribute to nascent efforts to deliver carbon negativity, meaning a net reduction in greenhouse gas emissions.

Existing carbon capture processes first isolate CO2 gas in the air by turning it into a solid salt and then use high temperatures to turn it back into pure CO2 gas, explains PhD student Xiao.

The heat required makes it an expensive way to capture carbon, accounting for about two-thirds of the overall energy cost.

“One of the main goals in our project is we try to minimize the energy cost of that carbon dioxide liberation process,” said Xiao.

E-quester's work instead uses an electrochemical process to avoid this step, potentially creating a cost-effective way to recover carbon in a form that can be easily isolated and stored or used as a feedstock for other industrial processes.

“The fundamental principles of the design have been proven to work, now we just need some funds to combine all the subsystems together and experimentally show our design works,” said Liu, a master's student.

The funding they secured this month comes from the US$5-million XPRIZE competition for university students, which is itself part of a broader $100-million prize for innovative ways to capture and store carbon dioxide backed by Tesla CEO Elon Musk and his foundation.

Xiao says the team, a collaboration between labs led by professors David Sinton and Ted Sargent, will likely spend a large chunk of their prize money on lab equipment and will also have to invest in figuring out the most efficient substance to use to speed up the chemical reaction involved in the process.

They are now preparing for the next phase of the open competition, a February deadline for submissions from the first year of the four-year competition that could see up to 15 teams secure $1 million each.

A team of students at #UofT are among 23 groups sharing a US$5-million prize for developing carbon removal technology, part of an ongoing $100-million prize funded by Tesla CEO Elon Musk. #CarbonCapture

Xiao said a couple of hundred teams are already in the field, and she expects thousands to end up submitting carbon capture projects, which can be nature-based, pull carbon from the atmosphere, oceans or land, or use any other process with the potential to remove and store large amounts of carbon.

To win the grand prize of $50 million (or the $30 million that up to three teams of runners-up could share), teams must demonstrate a working solution that removes at least 1,000 tonnes of carbon a year, model their costs at a scale of one million tonnes a year, and show a way to expand that to billions of tonnes in the future.

The Intergovernmental Panel on Climate Change (IPCC) estimates humanity needs to remove around 10 billion tonnes of CO2 per year by 2050 in order to keep the global temperature rise under 1.5 C or 2 C, the range at which the worst impacts of climate change could be avoided.

While emissions dipped in 2020 as the COVID-19 pandemic slowed economic activity, it has likely bounced back in 2021, the International Energy Agency says.

The world’s largest existing DAC plant, in Iceland, came online in September and can capture 4,000 tonnes of CO2 per year for storage in basalt formations.

Two other teams with a Canadian connection won part of the student prize money; one involving Skyrenu Technologies from Université de Sherbrooke and the Inrs-Eau Terre Environnement Research Centre, and the other seeing University of British Columbia students team up with Takachar (Safi Organics) from Kenya, India’s IISC Bangalore and the U.S.’s Northeastern University.