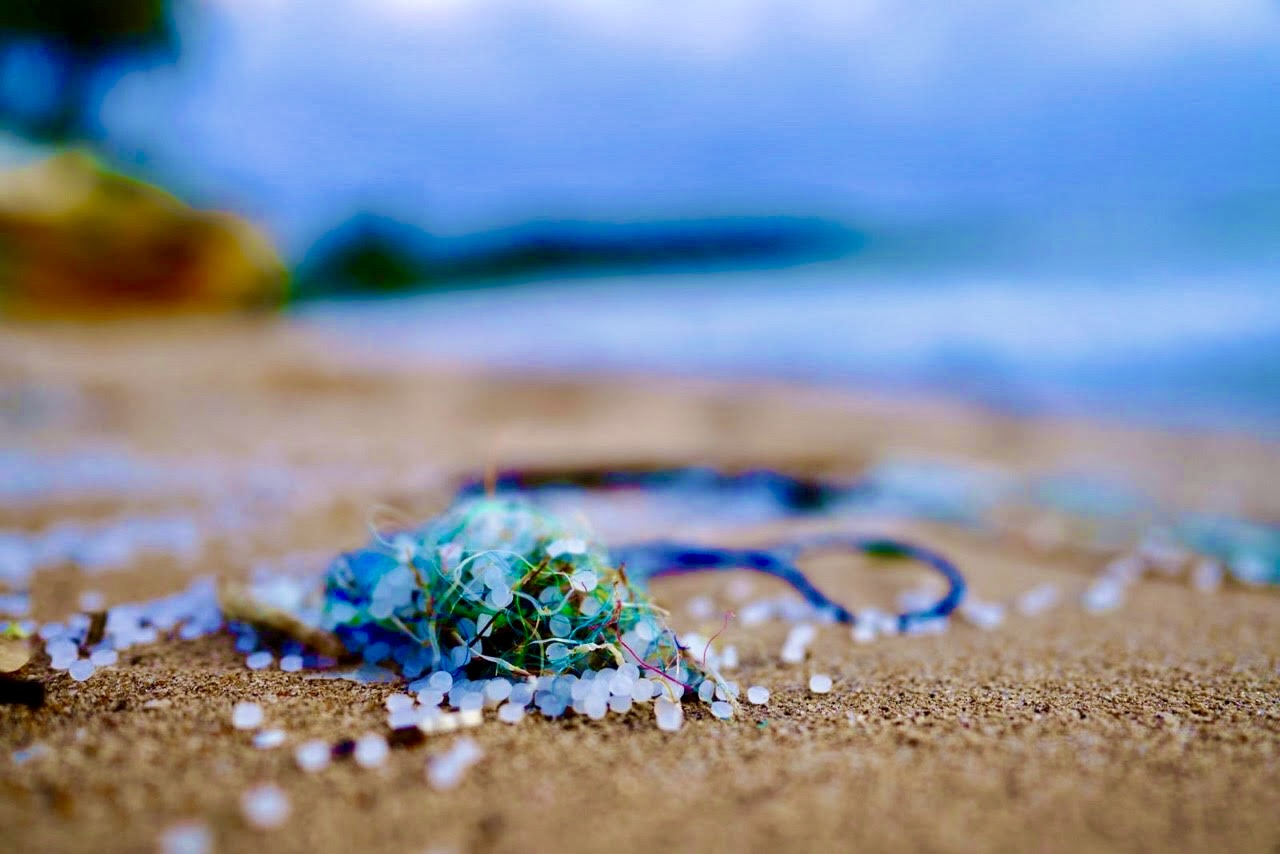 Picture taken at Mirissa Harbour on May 30. In addition to the usual plastic trash on that beach, now there are millions of little plastic pellets that come from the ship X-Press Pearl. Photo by Sören Funk / Unsplash
Previous story
Next story

When the X-Press Pearl container ship caught fire and sank in the Indian Ocean in May, Sri Lanka was terrified that the vessel’s 350 tonnes of heavy fuel oil would spill into the ocean, causing an environmental disaster for the country’s pristine coral reefs and fishing industry.

Classified by the UN as Sri Lanka’s “worst maritime disaster,” the biggest impact was not caused by the heavy fuel oil. Nor was it the hazardous chemicals on board, which included nitric acid, caustic soda and methanol. The most “significant” harm, according to the UN, came from the spillage of 87 containers full of lentil-sized plastic pellets: nurdles.

Since the disaster, nurdles have been washing up in the billions along hundreds of miles of the country’s coastline, and are expected to make landfall across Indian Ocean coasts from Indonesia and Malaysia to Somalia. In some places, they are up to two metres deep. They have been found in the bodies of dead dolphins and the mouths of fish. About 1,680 tonnes of nurdles were released into the ocean. It is the largest plastic spill in history, according to the UN report.

Nurdles, the colloquial term for “pre-production plastic pellets,” are the little-known building block for all our plastic products. The tiny beads can be made of polyethylene, polypropylene, polystyrene, polyvinyl chloride and other plastics. Released into the environment from plastic plants or when shipped around the world as raw material to factories, they will sink or float, depending on the density of the pellets and if they are in freshwater or saltwater.

They are often mistaken for food by seabirds, fish and other wildlife. In the environment, they fragment into nanoparticles whose hazards are more complex. They are the second-largest source of micropollutants in the ocean, by weight, after tire dust. An astounding 230,000 tonnes of nurdles end up in oceans every year.

Like crude oil, nurdles are highly persistent pollutants and will continue to circulate in ocean currents and wash ashore for decades. They are also “toxic sponges,” which attract chemical toxins and other pollutants onto their surfaces.

“The pellets themselves are a mixture of chemicals — they are fossil fuels,” says Tom Gammage at the Environmental Investigation Agency (EIA), an international campaign group. “But they act as toxic sponges. A lot of toxic chemicals — which in the case of Sri Lanka are already in the water — are hydrophobic [repel water], so they gather on the surface of microplastics.

“Pollutants can be a million times more concentrated on the surface of pellets than in the water,” he says. “And we know from lab studies that when a fish eats a pellet, some of those pollutants come loose.”

Billions of these tiny plastic pellets are floating in the ocean, causing as much damage as oil spills, yet they are still not classified as hazardous. #Nurdles #PlasticWaste

Nurdles also act as “rafts” for harmful bacteria such as E. coli or even cholera, one study found, transporting them from sewage outfalls and agricultural runoff to bathing waters and shellfish beds. The phenomenon of “plastic rafting” is increasing.

Yet nurdles, unlike substances such as kerosene, diesel and petrol, are not deemed hazardous under the International Maritime Organization’s (IMO’s) dangerous goods code for safe handling and storage. This is despite the threat to the environment from plastic pellets being known for three decades, as detailed in a 1993 report from the U.S. government’s Environmental Protection Agency on how the plastics industry could reduce spillages.

Now environmentalists are joining forces with the Sri Lankan government in an attempt to turn the X-Press Pearl disaster into a catalyst for change.

When the IMO’s marine environment protection committee met in London this week, Sri Lanka’s call for nurdles to be classified as hazardous goods attracted public support, with more than 50,000 people signing a petition. “There is nothing to stop what happened in Sri Lanka happening again,” says Gammage.

Last year, there were at least two nurdle spills. In the North Sea, a broken container on the cargo ship MV Trans Carrier lost 10 tonnes of pellets, which washed up on the coasts of Denmark, Sweden and Norway. In South Africa, a spill in August 2020 came after an accident in 2018, which affected up to 2,000 kilometres of coastline. Only 23 per cent of the 49 tonnes spilled were recovered. In 2019, 342 containers of plastic pellets spilled into the North Sea.

Awareness is growing about the huge threat posed by the tiny pellets. Last year, two environmental protesters in the U.S. were charged under a Louisiana state law with “terrorizing” a plastics industry lobbyist when they left a box of nurdles outside his house as part of a campaign to stop the Taiwan-based Formosa Plastics from opening a factory in Louisiana.

The nurdles came from another Formosa plant in Texas, which had spilled vast amounts of the pellets into Lavaca Bay on the Gulf of Mexico (Formosa agreed to pay $50 million to settle a lawsuit for allegedly violating the Clean Water Act). The charges against the activists, which carried a 15-year prison term, were later dropped.

Such incidents are preventable, campaigners say. “The sinking of the X-Press Pearl — and spill of chemical products and plastic pellets into the seas of Sri Lanka — caused untold damage to marine life and destroyed local livelihoods,” says Hemantha Withanage, director of the Centre for Environmental Justice in Sri Lanka. Consumption of fish, the main protein source for 40 per cent of Sri Lankans, has reduced drastically, he says. “It was a huge accident and unfortunately, there’s no guidance from the IMO.”

Classifying nurdles as hazardous — as is the case for explosives, flammable liquids and other environmentally harmful substances — would make them subject to strict conditions for shipping. “They must be stored below deck, in more robust packaging, with clear labelling,” says Tanya Cox, a marine plastic specialist at the conservation charity Flora & Fauna International. “They would also be subject to disaster-response protocols that can, if implemented in the event of an emergency, prevent the worst environmental impacts.”

But the nurdle can has been kicked down the road, with the IMO secretariat referring the issue to its pollution, prevention and response committee, which meets next year. Campaigners said it was disappointing the Sri Lankan proposal was not properly discussed. The EIA’s Christina Dixon said: “The attitude of the committee members was extraordinary and showed a callous disregard for plastic pollution from ships as a threat to coastal communities, ecosystems and food security. This is simply unacceptable.”

Meanwhile, the cleanup continues in Sri Lanka. Some of the 470 turtles, 46 dolphins and eight whales washing ashore have had nurdles in their bodies, says Withanage. While there is no proof the nurdles were responsible, he says: “I’ve seen some of the dolphins and they had plastic particles inside. There are 20,000 families who have had to stop fishing.

“The fishermen say when they dip [themselves] into the water, the pellets get into their ears. It’s affected tourism, everything.”