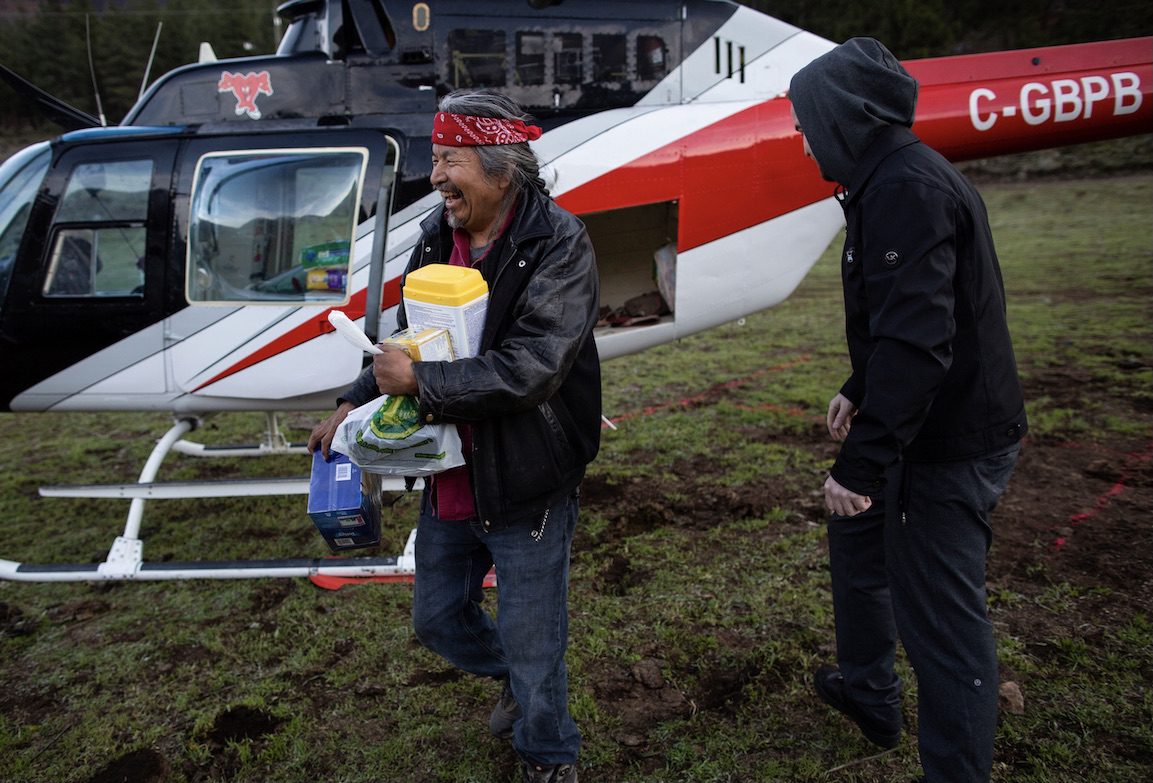 It was pouring rain the morning of November 15th when Rolene Edwards got the call: The Nicomen River was chewing up the only bridge linking her community to the outside world.

"It was so crazy ... so surreal," she recalled more than two weeks later standing alongside the river's ragged 40-foot bank. Never had members of the Nicomen Indian Band seen the river - usually a gentle creek perfect for summertime swims - flow with such force that it sent microwave-sized boulders and entire tree trunks crashing down the mountainside.

While the flood has since subsided, the Indigenous community of about 50 people off Highway 1 near Lytton, B.C. remains largely isolated with no road access to their community. The only way out is a rough footpath cut into the mountainside that deposits residents on a remote stretch of highway a 45-minute drive away from the nearest town of Ashcroft, B.C.

With the prospect of a temporary bridge still weeks away, residents are relying on teams of volunteer pilots to bring in donated food, animal feed, and other basic necessities by helicopter. Like many of the 30-odd southern B.C. communities that remain cut off by the floods, the band has received minimal support from the provincial and federal governments in recent weeks.

On Friday afternoon, Chief Norman Drynock was on hand to meet the first re-supply flight in nearly two weeks. The former wildfire fighter beamed as he watched the helicopter land in a field ringed with frosty sagebrush.

"We've been rationing," he said, half-joking as he stepped out of his well-loved truck to greet pilot Liam Wright. While cupboards weren't yet bare, community members have been coordinating between the dozen or so households to ensure that everyone - babies, elders, teens, and adults - have enough to eat.

Hopping back into the vehicle, Drynock pulled up next to the aircraft. It was late, and the sun had fallen behind the surrounding mountains hours earlier, a signal Wright needed to leave quickly to make it to his home base in Langley B.C. before dark.

Fifteen minutes later, the bed of Drynock's pickup was full: Crates of toothpaste, and twelve-packs of water, fruit juice, and rehydration drinks wedged Costco-sized boxes of instant ramen and Kraft Dinner in place. Family-sized packs of diapers and feminine hygiene products jostled for space with crates of organic granola bars. Bags of chips and vinyl-wrapped blankets were stuffed into the remaining empty nooks.

Edwards, who had also come to meet the helicopter, said the eclectic load was largely tailored to meet the community's needs. For the past two weeks, the mother of three teenagers and Drynock's "number one" helper has been constantly on the phone. With each flight worth several thousands of dollars - a cost covered by the volunteer pilots and donations - she has been busy making detailed lists of her neighbours' needs to ensure each inbound helicopter is loaded with necessities.

"The one I get asked about the most is lettuce," she said with a chuckle.

Set amidst a forest of pine trees and horse pasture atop a sandy embankment high above the Nicomen and Thompson rivers, both tributaries to the Fraser River, the community has been relatively fortunate, except for the bridge washout, she said. No houses were flooded and the community was never evacuated.

That was a major difference from the other climate disaster to strike the community this year. The band is only 18 km from Lytton B.C. When record-breaking temperatures hit last summer, precipitating a massive wildfire that destroyed the town and ripped through nearby forests, the Nicomen band had to evacuate to Merritt, B.C., an hour's drive away.

"During the fire, we were having a hard time because even though we were in Merritt, we didn't get to see (family) all the time. I'm a very family-oriented person, and not being able to see each other and do dinner, all these things - it was really hard," she said. "But with this, we're all stuck together."

Although the community is in higher spirits than it was in the summer, Edwards said the floods are taking their toll. Cut off from friends and forced into online schooling, her kids are bored. Her pregnant sister had to walk out to the highway soon after the flood for medical care, meaning Edwards probably won't see her until after the birth. And the community's plan to welcome the Nicomen's roughly 150 members to the first Christmas gathering since the COVID-19 pandemic began will be called off if the temporary bridge isn't installed soon.

"We haven't been able to do that for two years - this was going to be the year," she said standing on the river bank overlooking the construction crew working on the new bridge. "But now we have all that food in the office and we don't have a bridge to get everybody in."

Even when the bridge is rebuilt, ensuring a steady food supply will likely remain a challenge. This summer's fire destroyed the nearest grocery store in Lytton, and Merritt was completely flooded during the recent storms. Ashcroft, a town roughly 45 minutes drive to the north, is the nearest place to re-supply.

Fires also incinerated lands where community members hunt and gather wild foods. With these food sources already stressed by harmful forestry practices, sport hunting, and other extractive industries, Drynock said it could be years before they can feed the community again.

When Drynock was young, he remembers the nearby Thompson River filled with salmon packed so tightly together that "if you fell in and put your arms out, you wouldn't drown." Now, there are too few to support even a small food fishery. Habitat destruction, industrial fishing, and other factors have decimated salmon stocks to the point where the Nlaka'pamux Nation, of which Nicomen Indian Band is a part, this year bought Alaskan salmon for its members.

"It's pretty tough right now," Drynock explained as he looked out at the charred tree trunks poking through the hillside above town. "We have industry going all around us - taking our timber, taking our minerals - and we're not getting anything out of it."

While Drynock has wanted to start fighting for more control over natural resource extraction in the band since being elected chief in September, the flood crisis has forced him to put some of those plans on hold. In the meantime, he and Edwards will keep working the phones and meeting helicopters on cold December afternoons to do their part in helping the community grapple with the fallout of a climate disaster.

"Everybody comes together when stuff like this happens," Edwards said as Wright grabbed the last few boxes of food packed onto the helicopter's back seat. "It's always been the way we do things here."