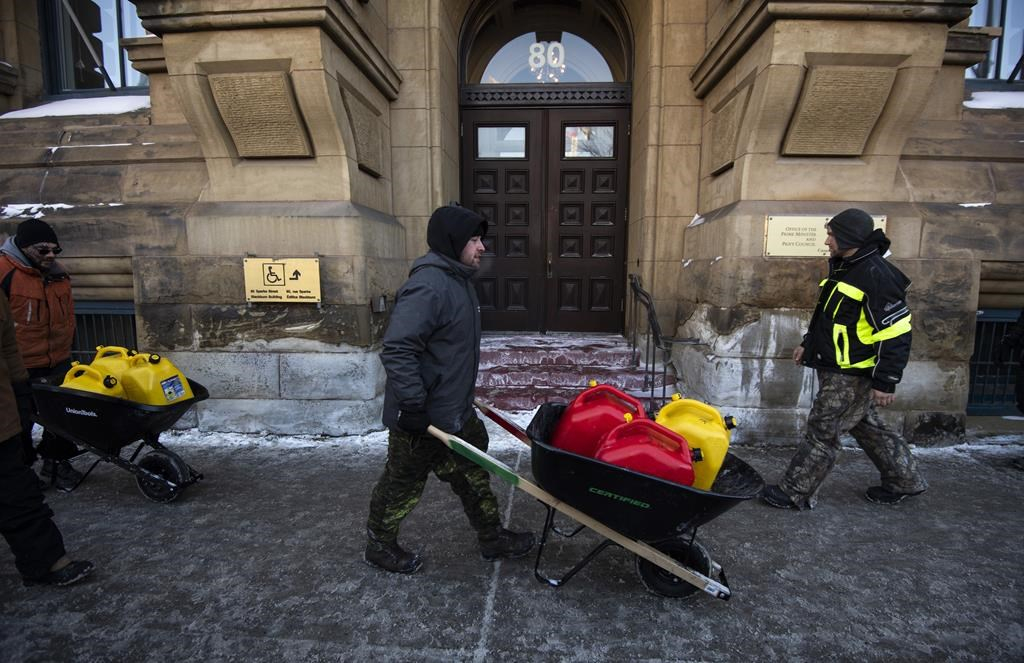 Man pushes gasoline in a wheelbarrow past the Prime Minister's Office to refuel his truck. Photograph by The Canadian Press
Previous story
Next story

Ottawa Mayor Jim Watson is declaring a state of emergency to give the city more flexibility to deal with ongoing protests that have overwhelmed local resources.

In a brief release, the city says the decision reflects the “serious danger and threat to the safety and security of residents” from protesters encamped through much of the downtown core.

The decision gives the city some additional powers around procurement and how it delivers services. The city’s release noted those powers could help purchase equipment required by frontline workers and first responders.

The release also says the decision underlines the need for support from upper levels of governments.

Earlier Sunday, Ontario Premier Doug Ford said the province has backed Ottawa during the nine-day protest that critics have branded an occupation.

“While we cannot direct the police, we have provided the City of Ottawa everything they have asked for and will continue to provide whatever support they request,” Ford said in a tweet.

A swell of 250 RCMP officers bolstered police presence in the national capital on Sunday. Ottawa police said more than 450 tickets have been issued to demonstrators since Saturday morning for excessive noise, red light violations, driving a vehicle on a sidewalk and setting off fireworks, among others.

Almost 100 criminal investigations were underway, including cross-border investigations into what Ottawa police said were “email-based threats to public officials.”

Police also said on Sunday that anyone trying to bring items like gasoline or supplies to protesters and the 500 vehicles downtown could be arrested.

This report by The Canadian Press was first published Feb. 6, 2022.

In case you’re wondering why #centretown residents and the rest of urban Ottawa are losing our minds…my watch was showing dB readings hitting 105 dB at Bank & Queen. This occupation has ZERO sympathy from us anymore. #OttawaOccupation #GoHomeConvoy #ottcity pic.twitter.com/6aWZXYTN2H