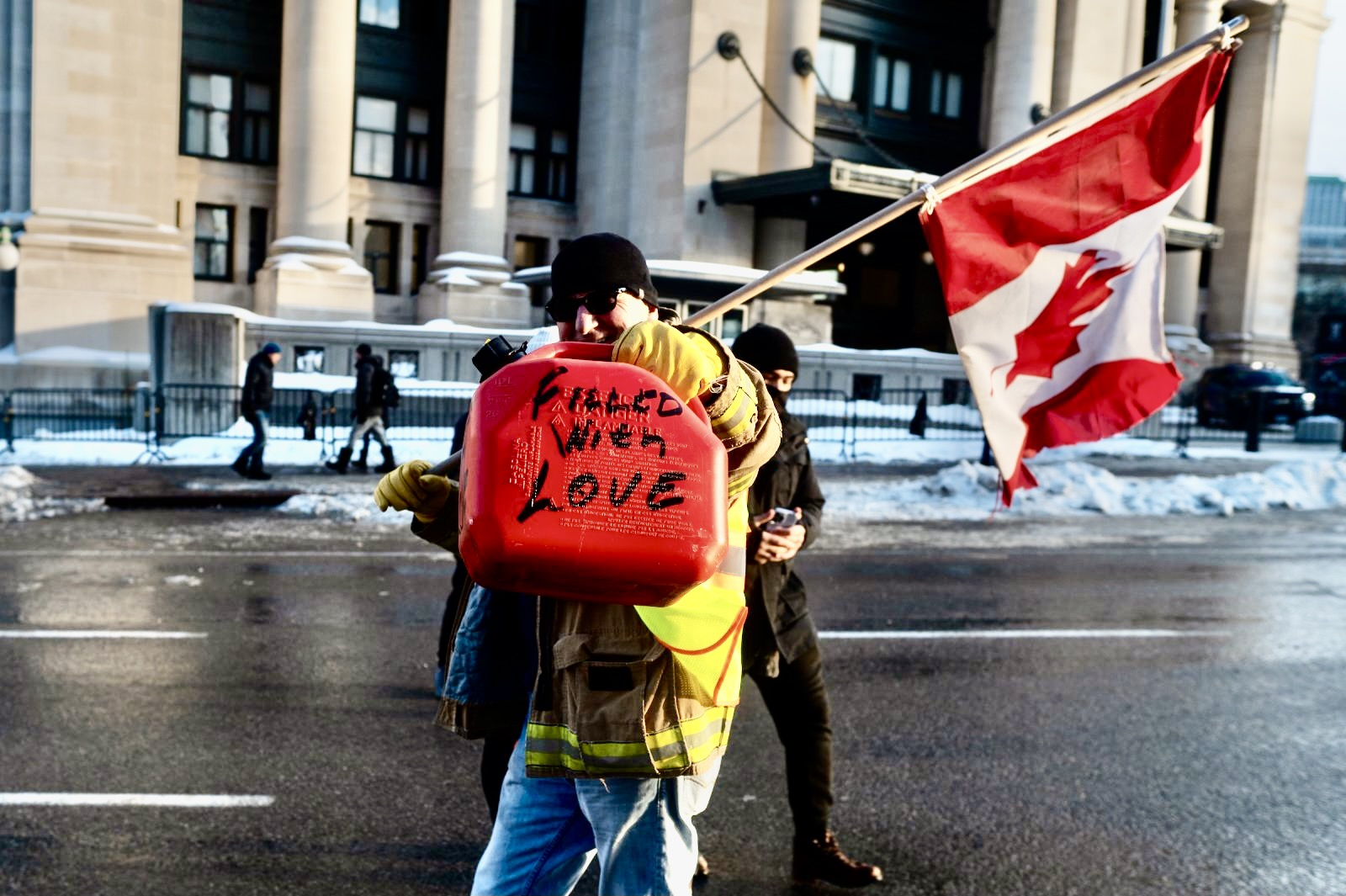 A trucker convoy protestor holds up a jerry can with the words 'Filled with Love' during the eleventh day of protest on Monday, Feb. 7, 2022 in Ottawa, Ont. Photo by: Spencer Colby/National Observer
Previous story
Next story

Thousands of angry Brown men converge on the Canadian capital. Though the racist pasts of event organizers have been made clear in news reports, the group insists it is not driven by hate. The convoy faces no resistance from local officials or police and quickly seizes the area surrounding the country’s Parliament. It embarks on a weeks-long campaign of intimidation and abuse, of racism, misogyny and homophobia. Its members randomly assault people on the street without fear of reprisal.

They honk vehicle horns at all hours to ensure those who live downtown, including people in shelters, cannot sleep. Two of them even try to burn down an apartment building, sealing the lobby doors as they exit. Some residents stop leaving their homes. Others flee their neighbourhoods entirely. Millions of dollars mysteriously pour in through the convoy’s online fundraising campaign, including a wave of money from outside the country. Nothing is done. Provincial and federal leaders do not come to residents’ aid. The police are nowhere to be found. The mayor admits the convoy is calling the shots. It’s their city now.

Sounds far-fetched, doesn’t it? That a racialized group, even if interested, could get away with leading such a violent insurrection in Ottawa, in Canada, in 2022?

Why, then, has this sequence of events been permitted when the vast, vast majority of perpetrators are white? With Nazi and Confederate flags in the air? With more than 400 calls already made to a police tip line dedicated to hate crimes?

Pull up a photo of the convoy that has seized control of this city and you’ll see signs advocating for all sorts of things.

Unvaxxed sperm as the new Bitcoin? Uhhh, sure.

The alleged motivations do not stop there. Ottawa residents cannot walk far without being subjected to unspecific shouts of “FREEEEEDOM!” Three years ago, a similar convoy swept through the capital, claiming to want support for pipeline projects. It failed to fully take root but did provide valuable practice. This time, the convoy has successfully occupied the streets around Parliament and erected a blocks-long monument of hate.

Given the ease with which it has taken over, the taste of power for those convinced of their own exceptionalism, it is clear that even if convoy members can be persuaded to leave they will inevitably return. They will find a cause. Because when you’re driven by white supremacy and white grievance, as I would suggest this convoy ultimately is, you can always muster up an excuse.

Whether in politics, media or society at large, Canadians have a hard time saying the word “white,” with the term deemed especially taboo by those who could be described as such. But failure to note precisely what convoy members are rallying behind, to instead give weight and legitimacy to reasons that cannot support it, is perilous at best.

That we are in an era of white grievance, if we’ve ever existed outside of it, cannot be seriously disputed. The election of former U.S. President Donald Trump, who as recently as last month told rally-goers they were being denied COVID-19 treatment because they’re white, has only furthered the false victimhood among a group that nonetheless gets away with behaviour those who are Black, Indigenous or people of colour never could, regardless of which side of the border you’re on.

While some Canadians are quick to suggest U.S. examples do not apply here, as though the Racism Playbook has separate editions, the now-interim leader of this country’s Conservative Party — previously photographed in a “Make America Great Again” hat — drew an indisputable link when she reportedly said the convoy issue has “good people on both sides,” a clear reference to Trump’s very similar comments after white supremacists marched on Charlottesville. The Conservatives pull closer to the mob and white identity politics with each passing day, content to deflect any criticism by pointing to Trudeau’s past use of Blackface, as though this means it, too, should be permitted to utilize an undisclosed number of racisms.

That excuses for the convoy will be made due to its whiteness is inevitable.

We’ll be told this has nothing to do with race. That it’s really not so bad. That these people are individuals who can’t be held liable for a whole group, even as people of colour are continually treated as monoliths responsible for entire communities.

We’ll hear that not every single person was flying the hateful flags. That a small percentage of nonwhite people were there in attendance. That this person or that person has ethnic roots. That comments about preserving the white race are normal. That long histories of anti-Muslim remarks are overblown. That preparing a document that calls for the overthrow of a democratically elected government is patriotism. That cries for a Canadian “January 6” were never serious. That 400 calls for hate crimes related to a single event isn’t that many, even as we know not everyone will bother to report given the police department’s unwillingness to do much of anything beyond push for a bigger budget.

Canada has seen at least some racial progress in recent years. A survey released in November by the Canadian Race Relations Foundation said there is greater awareness of systemic racism within the country today, following the murder of George Floyd, the locating of unmarked graves at the Kamloops Indian Residential School and attacks on people of Chinese descent during the pandemic.

There is, however, a price to pay for racial progress, no matter how minute that progress may be. That the convoy has chosen this period to stop the world, to re-stake its claim to it, to use whatever grievances it can to hold the streets for another day, is hardly a coincidence.

It has rapidly become cliche for political and corporate leaders announcing a new race-based initiative to acknowledge the inadequacy of their own efforts, to say that “more work” needs to be done even amidst their back-patting. But the level of and tolerance for white supremacy in this country is not a problem that is going to be fixed through one’s organization finally posting a job for a head of diversity and inclusion.

This convoy situation. This is it, or at least part of it. This is the “more work.”

Is Canada up to the challenge?

Because if time has taught us anything, it’s that this problem is not pulling away on its own.

Support for the convoy has

Support for the convoy has held at 29% for over two weeks, but the opposition numbers are rising, more people moving from "somewhat oppose" to "strongly oppose". This has been a loss for them; a loss for Conservatives, electorally, for supporting them, and a loss for their organization.

I had a fun blog post today, asking "Where Have All The Swastikas Gone?" Vanished from the convoy for weeks, now. What about THEIR "Freedom of Speech", convoy censors? Don't they have a right to wave Confederate Flags? How could you silence them?

Oh, was it that they were causing riskto the group they were with? Had to be pushed out? But that's the same philosophy as a government vaccine mandate!! Guys, how could you?
http://brander.ca/c19#ottawastikas

Content deactivated
Excellent op-ed at National Observer reflecting that this is all about white supremacy. ========== CBC has gone all trashy, too.

I truly enjoyed reading your

I truly enjoyed reading your post.
Then I stayed around to read some more. Thanks Roy!

Thank you. I had a far more

Thank you. I had a far more important blog post today, but no need for that link, because all I do is tout the fantastic article at TheAtlantic.com, by Canadian author Stephen Marche.
https://www.theatlantic.com/ideas/archive/2022/02/canada-anti-vaccine-tr...

It completely turned my head around, while I don't retract anything from yesterday. But it convinced me that the real victory here is for Canadians to stop getting angry, do be conciliatory, do de-escalate. Yes, there are awful people with them, but they are a small minority even in that crowd.

Marche points out that this is American political tactics in action, and we fall for them if we escalate, if we get angry. Let's stay Canadian.

You're right. This article is

You're right. This article is a must read! Thank you so much for bringing it up!
I must admit that for days I had been doing nothing but get triggered by this stupid protest and everything surrounding it. To the point of even being disgusted by anyone that would "dare" trying to paint a human face on those involved. Amazing how easily hatred can take over and stick.
It's great to get this moment to just stop and think things over.
You did me a huge favour!

Thank you Sunny. You have

Thank you Sunny. You have done a fantastic job of condensing what I hope are the feelings of most Canadians into a clear and succinct essay. It’s voices like yours that need to be heard as we as a community attempt to speak truth to the mythology of white grievance. Privilege does seem to breed a certain kind of myopia doesn’t it. Great to see your byline in the National Observer.