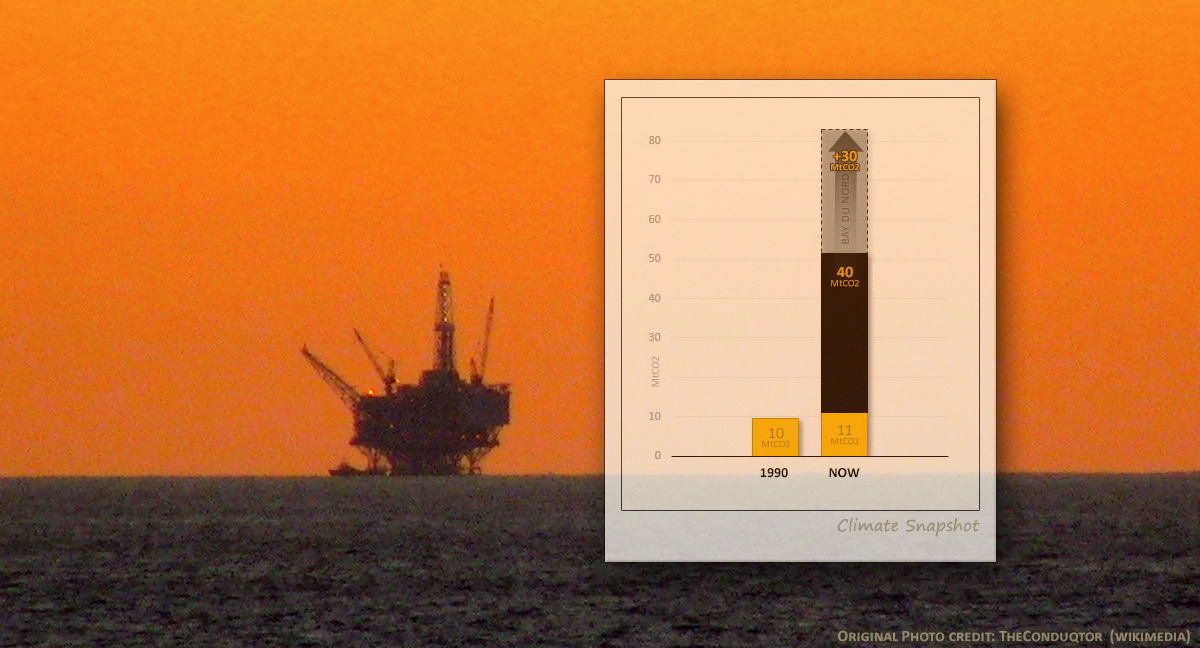 Bay du Nord. It calls for developing a huge new complex of oilfields offshore of Newfoundland and Labrador.Graphic by Barry Saxifrage
Previous story

The International Energy Agency has clearly stated that no new sources of fossil fuels can be developed if humanity wants to keep the climate crisis within the guardrails set in the global Paris Agreement. The oil industry in Canada, however, shows no sign it plans to do what's needed voluntarily.

The latest example is an industry proposal called Bay du Nord. It calls for developing a huge new complex of oilfields offshore of Newfoundland and Labrador. The industry plans to extract 200,000 barrels a day from this new complex. That much oil will add 30 million tonnes of CO2 (MtCO2) to our atmosphere every year when it is burned.

My chart puts it in context.

Back 1990 when Prime Minister Brian Mulroney first promised that Canada would reduce our climate pollution, Newfoundland and Labrador emitted 10 MtCO2. And they didn't have an oil extraction industry. Their climate impact back then is shown by the small bar on the left of the chart.

Since then, the province has increased emissions to 11 MtCO2. And oil extraction in the province has accelerated from zero to 95 million barrels a year. All that new oil is emitting 40 MtCO2 a year into the atmosphere when burned. The combined climate impact is shown in the tall bar on the chart.

Five times more CO2 is now flowing through Newfoundland and Labrador's economy than in 1990. And now the province and the oil industry are planning to toss another 30 MtCO2 a year on top if their push for the new Bay du Nord complex is approved.

There appear to be no functional brakes on our nation's runaway fossil-carbon juggernaut. Oil exports in Canada are record high and rising fast. We export six times more oil than we did in 1990. And the climate damage we are exporting in our oil has surged along with it — rising by half a billion tonnes of CO2 a year along the way.

Amazingly, half a billion tonnes of CO2 more since 1990 still isn't enough. To lock in even more, the current federal government has been pumping billions of dollars into a gigantic expansion of the TMX oil pipeline that terminates in our atmosphere.

Now that same federal government will soon decide whether to green-light sending a billion barrels or more from beneath Bay du Nord into our atmosphere as well.

Analysis: Are there any limits on how much CO2 Canada plans to export into our atmosphere? asks Barry Saxifrage. #Carbon #ClimateCrisis