MOVIES: Cheaper by the Dozen, The Outfit, Deep Water and more 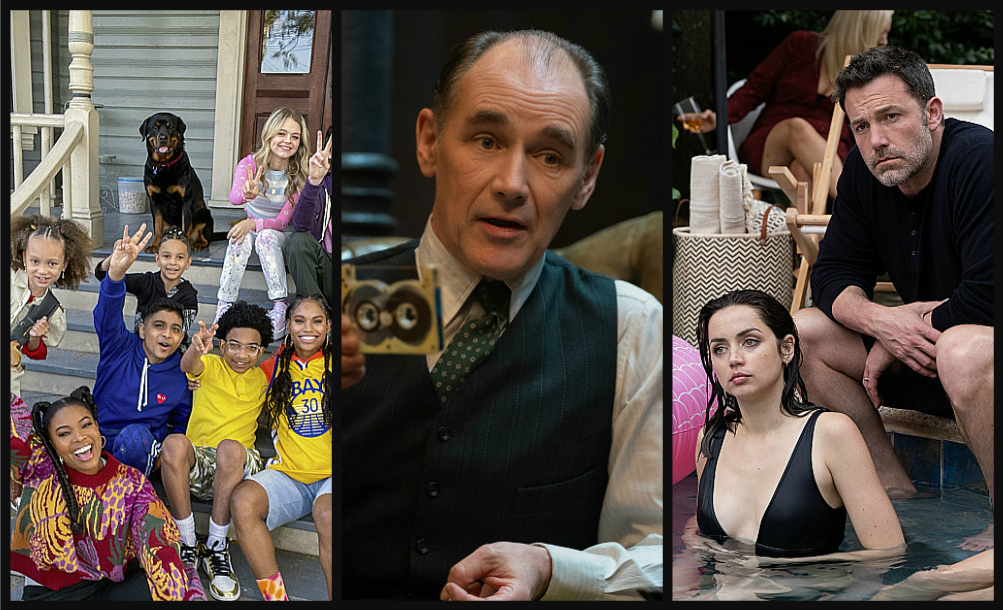 There's a full slate today but notice that two films you'll want to see have just become more available. There's Dune, Denis Villeneuve’s vision of the Frank Herbert sci-fi novel (well, half of it) which has 10 Oscar nominations. And there's Beans the excellent dramatic film that remembers the Oka Crisis of 1990. How often do you see that event referenced in the news? Yeah. Both films start today on Crave.

And these are new:

Cheaper by the Dozen: 3 stars

CHEAPER BY THE DOZEN: This is the third time for this family and its antics. The 1950 version is still a quaint and sentimental favorite, the 2003 entry was a huge hit and spawned a sequel and this one updates both. No longer is the father an efficiency expert, or a football coach. He (Zach Braff) runs a restaurant, has invented a special sauce and is looking for money to produce it. His consultants want to franchise the restaurant itself and make it bigger than Ihop. So, of course, dad is away from home a lot. Check off one staple of family films.

He's married to a black woman (Gabrielle Union) and the two packs of kids they've brought together are a diverse lot. The wife's ex, a football player, drops in and complains his two black kids wouldn't get a proper upbringing from a white father “in this racist world.” There's a teen girl who's an overlooked star in basketball and a teen-boy cousin, adopted into the family, who is surly and accused of theft. The big plot point comes when they all move into a bigger house (the kids all get their own room, yeah) but the neighborhood doesn't welcome them. It's a warm, fluffy, rambunctious film and a good choice for a family evening. (Disney+) 3 out of 5

THE OUTFIT: The superb acting of Mark Rylance is available again in this crafty little film that throws clever ideas and strong characterisations about with panache. I don't know if they say that word in Chicago, where it's set, but the tailor that Mark plays is originally from London so I'll use it. He's an expert tailor and came over because blue jeans were taking over. Or so he says. Later we find out there's much more to it and that's a good example of the surprises that keep coming at us.

The tailor shop he runs is being used by gangsters to get and receive messages. So he meets a succession of them including a boss (Simon Russell Beale); his son (Dylan O’Brien) and his second-in-command (Johnny Flynn). At one point he has to sew up a bullet hole for one though all he really wants to do is explain the art of tailoring. Point one: find out what image the buyer wants to create. “Who would this man like to be and who is he underneath?” is the question. That's lost on the hoods though. They're looking for a “rat” who is telling the cops about them. A tape recording may have the goods on it and has to be secreted about and hidden. The story twists as the hoods try to keep the blame away from themselves and also when a rival gangster arrives. It all happens in one place and yet doesn't feel like a play. It's high-powered and classy as directed and co-written by Graham Moore, who won an Oscar for writing The Imitation Game. (In theaters) 4 out of 5

DEEP WATER: You may expect an erotic thriller like we got years ago, but that's not exactly what you get now. The elements are there: novel by Patricia Highsmith, an afficianado of baser human types, Ben Affleck and Ana de Armas, who used be a tabloid-beloved item, playing husband and wife with sex and jealousy coming between them and direction by Adrian Lyne who long ago made classics of the genre like Indecent Proposal and Fatal Attraction. But he hasn't made a film in 20 years, Ben isn't right for his role and luminous and sexy Ana can't carry the film on her own. It's tepid, not the bracing hot gush you want.

The couple have a deal. She can see other men but she does it so openly, as at the classy parties they hold, that he seethes and fumes. He jokes that he killed a previous one of her lovers and guests start believing it. Maybe he did. That guy is missing and Tracy Letts, as one of the guests, is all too willing to snoop around and add credence to the suspicion. The rest of the film becomes a true-or-not enquiry. We're into it but don't have a lot riding on whether he's a killer or not. Affleck doesn't convey a lot of danger and his character isn't used to showing a lot of passion. That's according to his wife. She could have been talking about the film itself. It's glossy but less lurid and more lame than you'd want. (Streaming by Prime Video) 2 ½ out of 5

MORE THAN ROBOTS: Here's another science competition on film, the latest of several over the last few years. And once again I'm fascinated by the ingenuity and knowledge it shows. This could be very inspiring for young achievers and is pretty entertaining for anybody. It looks and sounds like a sports event and is backed by one of Disney's subsidiaries, LucasFilm, the Star Wars Company. They even sent Mark Hamill to make a welcoming speech.

The film shows four teams of highschool students given an assignment to build a robot that can shoot rubber balls into a target hole and then lift itself up to a suspended rod. Physical engineering skills and computer coding are essential. The teams are given the same resources (plastic and metal parts, mostly) and come with different abilities. Two are American, the others are Mexican and Japanese. Girls are encouraged to get in. One teen has “a double major in neuro-science and psychology.” It'll all come in handy because the teams will have to co-operate and form alliances to move up through the levels in this contest, to the regionals and beyond. COVID interrupts this time but how the teams react to it proves the team-building focus works. (Disney+) 3 ½ out of 5

ALICE: Here's a most unusual meditation about racism in the US. What it asserts is not unique, that many of the ills of the days of slavery, persisted long after. It's how it says it that's different. Two eras are shown to let us see those similarities. They're actually the same time. The film directed by Krystin Ver Linden (her first) makes its point through the changes one woman goes through.

Alice, played by Keke Palmer, is upset by the cruelty of the owner (Jonny Lee Miller) on the plantation where she lives. He calls people like her “domestic livestock.” She seriously injures him in a fight and runs away. Past the woods she comes to a highway and is nearly run down by a truck. That's a spoiler but all the summaries give it away because what comes after that is the real purpose of the film. The truck driver (played by Common) takes Alice into town and she learns what has become of America. It is 1973 and discrimination persists. Though she can't write, she can read and learns that slaves were emancipated long ago. Her owner lied to her. Alice learns about Malcolm X, Fred Hampton and Angela Davis (we get news clips of them and others) and gets inspired by a blacksploitation movie about a revengeful black woman. Alice goes back home on a pay-back mission of her own. It's a radical statement, odd but angry and effective. (In theaters in Toronto and Vancouver, Ottawa next week) 3 ½ out of 5

PHOENIX RISING: This is one of the stronger films touching on the #MeToo movement. It names names, describes details and is highly personal. That candid quality is its strength, even as some misteps do some damage. Not enough to take away its power though. Make sure anybody you watch it with is mature enough to take the rough content. There's a lot of it in this two-part documentary, in which Evan Rachel Wood tells her own story about falling into the control and as she says extreme abuse of a rock star.

Brian Warner if you must know. He performs as the shock-rocker Marilyn Manson and is suing Wood over what she says in the film, which he says is “fabricated”. She didn't originally reveal his name, but when other women came forward saying they knew who she was talking about (from experience), she told it all. She met him at a party, fell prey to his emotional manipulation (“love bombing”) and what therapists call “grooming.” She spent four years as his girlfriend and describes the control her kept over her and increasing abuse. And weird details like what she says is his Hitler fascination. My question is how come it took so long for her to escape? She's become an activist since then, lobbying to get laws re-written both in California and Washington. Amy Berg directed the highly charged material with key interviews, some animation and more content than we really need. Part one tells it all; part 2 repeats some and meanders back and forth in time as Wood agonizes over naming “this dangerous man.” (An HBO film streaming on CRAVE). 4 out of 5

THE AUTOMAT is partly a business story and mostly a bit of nostalgia for a slower, calmer time. You don't even have to have ever been in one. They were in Philadelphia and New York and according to this film at one time served more people than any other restaurant chain in the US. I was in one once and the film with enthusiastic memories from the likes of of Mel Brooks, Carl Reiner, Ruth Bader Ginsberg and Collin Powell reminds me of that brief experience.

Officially called Horn & Hardart, after the two men who started them back in 1902, they were like cafeteries but the food was in compartments with glass doors. Like a vending machine, except that only held one dish, a piece of pie, some creamed spinach or whatever you chose. Coffee cost a nickle and was dispensed by spout shaped like a dolphin. People loved it. It was cheap, good, there was no tipping and a wide mixture of people ate there, often at tables with strangers. Quintessentially American, somebody says. Or American as it imagines it is. Howard Schultz, the Starbucks CEO, says he was inspired by it in what he's created at his chain. Automats didn't survive when the fast-food chains spread but the film is a tasty look back. (Playing in Toronto and Saskatchwan now, with Salmon Arm and other locations to come. Watch for it) 3 ½ out of 5