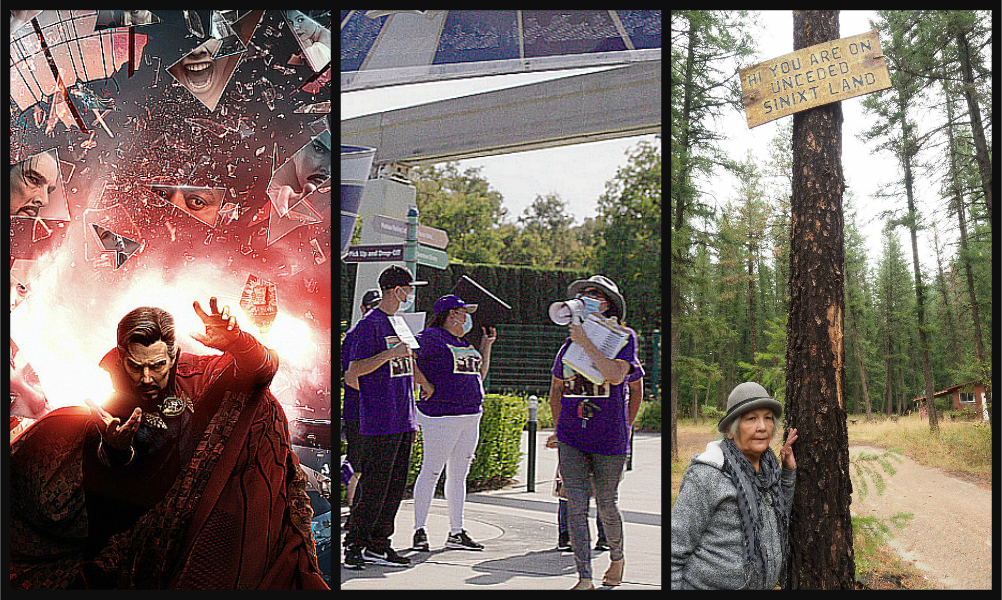 Also a charmer from France, an immigrant success from Nova Scotia and a mass shooting from Australia
Previous story

Hot Docs is winding up for the year this weekend; DOXA has another week to go and I have reviews from both. Not Navalny though. It got lots of promotion and the online screenings are all sold out. So, I'll wait until it reappears. It's got to because it's excellent and who wouldn't want to stick it to Vladimir Putin these days. The film does.

If you're in Vancouver note the Crazy8s finale Saturday night at the Center for the Performing Arts. Young directors competed to make films in only eight days. The six best will be shown, including two comedies, a romance and a horror. Then everybody will mingle at an afterparty at Science World. Google Crazy8sfilm to learn more.

And read about these:

Doctor Strange in the Multiverse of Madness: 2 ½

The American Dream and Other Fairy Tales: 4 ½

Wochiigii Lo: End of the Peace: 3

DOCTOR STRANGE IN THE MULTIVERSE OF MADNESS: It's one of the most anticipated films of the year and that's a bit odd because the earlier Dr. Strange entry under performed. But Marvel has built in a few safeguards. It brought in director Sam Raimi, who has walked these streets before. It green lit a script that puts this story as a direct follow-up to two big successes: Spider-Man: No Way Home and the Disney+ hit WandaVision. The fans will like analyzing the connection. It even makes sense because when you're talking about the multiverse you can have characters from anywhere get together without breaking logic. Here for instance, Elizabeth Olsen is back as Wanda Maximoff. And, of course, Benedict Cumberbatch is back as the doctor to add class to the comic book-inspired proceedings.


He has odd dreams. His ex-girlfriend (Rachel McAdams is getting married) and he runs into a teenage girl named America Chavez who is being pursued by a giant alien from another universe. He saves her but notices the slimy alien may have a connection to witchcraft. That prompts him to bring Wanda into the picture to help find who is after the girl and her ability to move about between different universes. There's a fine brief scene where we see her move through several. Later Strange has to find an alternate version of himself. Characters from previous movies pop in briefly. Can Sam Raimi keep all this straight? Not for me. It's hard to follow. He adds some of his horror movie tropes though and at one point turns Cumberbatch into a skullface zombie. There's fun at times and lots of special effects flash but not a lot of involvement. The pundits are predicting a huge opening weekend. (Playing in theaters everywhere) 2 ½ out of 5

THE AMERICAN DREAM AND OTHER FAIRY TALES: It's still got two more in-person screenings and three days of streaming at Hot Docs so I'm including it and also hope it'll come around again. That's because this is a very strong and quite radical analysis of the modern corporate world from a loud but connected voice. Abigail E. Disney is Walt's grandniece. That means she's the granddaughter of Roy, his brother and co-creator of Disneyland. She always knew it as "the happiest place on earth" but then saw something else. The employees were paid only minimum wage, which even with a recent raise is well below what they need to live in Anaheim. Executives are earning thousands of times more. Why such inequality?

She supports the workers; lets several tell their stories in the film and then goes further. Disneyland is only part of the problem. Inequality she argues is everywhere in American business. How did that happen? She explains in detail what she found. It's not new. We've heard about the free-market thoughts of Milton Friedman before and the government is dangerous message of Ronald Reagan. Not so much about a 1970s campaign by business leaders to discredit government and get it off their backs. Abigail shows the results. Whites turned to "the free marlet." Others were left out. She takes special aim at Bob Iger, who was CEO at Disney for 15 years and earned millions in bonuses. Her point is good but would have been stronger if she gave the context. He turned Disney into the entertainment mammoth it is today by buying Pixar, Marvel, Lucasfilm (Star Wars) and 20th Century Fox. But why short-change the workers, she asks. (Hot Docs) 4 ½ out of 5

WOCHIIGII LO: END OF THE PEACE: That would be part of the Peace River Valley in northeastern B.C. where work is pushing ahead on building a third hydro dam on the river. People are faced with being flooded out of the land they've lived on and hold sacred. "I believe that God is in the water," says one. Water in a reservoir from an earlier dam is too dangerous to drink because of mercury contamination. The fish, the cariboo and other wildlife are gone.

This powerful documentary by Haida filmmaker Heather Hatch looks at the long fight against Site C by local people who claim it violates their treaty rights. The project will "destroy an entire valley" they say and the film has generous views of the beautiful territory so that you really get what's at stake. Meanwhile the costs keep rising, and the politics keeps shifting. Premier John Horgan who used to oppose it says it has to go ahead. A court ruled it's "for the greater good." The controversy is on-going and well-presented in this film, though leaning to the one side, naturally. (At DOXA Wed and Thurs) 3 out of 5

BEYOND EXTINCTION: SINIXT RESURGENCE: This story is most bizarre. The Sinixt who lived in central B.C. down to and across the border into Washington State were declared extinct in Canada. They had no official recognition, couldn't be at treaty talks or speak up about other first nations who claim their land. The people though argued they're still here. They showed ancient relics and sites, including a burial site when a road was being built. The elders, kept fighting, especially the women like Marilyn James who says "I like being that person who isn't afraid to go to jail."

There have been road blocks, court challenges and appeals to the government, which of course can't talk to people who don't exist. Some moved south to Washington State, were recognized as the Colville Group and tried to claim rights on this side of the border. One did win hunting rights when he went to court and that's the reason for the word resurgence. It seems to be only a beginning though. Director Ali Kazimi originally tried to tell the story in 1995. He did interviews but couldn't get funding. Now he's used film from both time periods, and also a bit from 1939, to tell his tale with real depth. (In theater Saturday and also online) 4 out of 5

PETITE MAMAN: In my mind Céline Sciamma is at the top among filmmakers in France these days. Portrait of a Lady on Fire put her there two years ago; the script for Paris the 13th District confirmed it just recently and this one does it again. It's a magical fantasy but also real in what it explores –mother-daughter and friend-friend relationship s –and you'll be enchanted.

Eight-year-old Nelly (Joséphine Sanz) has lost her grandmother and while her parents are cleaning out her house wanders into the nearby woods and meets a girl much like herself. “You're my mother,” she tells her although she's the same age and (played by her twin sister Gabrielle) looks like her. That'll be reprised later on, not explained, just dealt with.

Meanwhile they become friends, visit each other's houses (which look oddly similar inside), play games and build a teepee-like hut out of tree branches (just like Nelly's mom said she had done as a child). Imagination or fact, it does reflect a wish that's common among children: to know more about their parents. The film moves at a comfortable pace and only takes 73 minutes to show it. (In theaters) 4 out of 5

PEACE BY CHOCOLATE: This is the only film I've ever seen that has Justin Trudeau in its cast list at the end. In a way that's proof that this is a true story. He's seen in a clip from a United Nations speech in which he told of a family of Syrian refugees who built a successful chocolate business in Nova Scotia. He also gave a sample to Nancy Pelosi but that's not in here. The inspiring story is though, starting in Syria where the family's factory was bombed, going on to Antigonish (not Toronto which the father wanted) and showing the many tiny difficulties immigrants encounter. I could relate; I remembered them from when we arrived.

The rest is more than novel. The father (played by Hatem Ali) was the best chocolatier in Syria. He hates what one woman in town is selling and wants to get back into the business himself. His wife objects because “that part of our life is over” but a small batch wows people at a church social and he tries again. The film shows many more authentic details, applying for a bank loan, communicating with a daughter still stuck in Syria, watching his son (Ayham Abou Ammar) try to get into medical school and have his overseas credentials recognized. A food inspector and in a strong scene a customs official cause problems. But the film, directed by Jonathan Keijser takes us through them all and depicts well the life of immigrants. The title is the name of the company founded by this group. (In theaters) 3 out of 5

NITRAM: Read it backwards. It's Martin, based on Martin Bryant who committed Australia's worst mass shooting back in 1996. 35 people dead. Why? This film doesn't have much of an answer but it does show what happened in the week before. It's compelling viewing and not as grim as you might think. For one thing the film cuts short of showing the actual shooting. It depicts what led up to it and like in many of these incidents there are no obvious signs. You're watching for them, though.

The young man was a loner, on meds for depression, snubbed by the surfers he wished to join and not well-understood by his parents. Mom (Judy Davis) was bossy; dad (Anthony LaPaglia) was more permissive but aware he wasn't connecting with him. That family dynamic is the main part of the film and could be unsettling for parents to see. He comes off as a regular guy with only the odd flash of anger. He cuts lawns and walks dogs to earn money. Then he inherits a house from one of his customers and starts buying guns. Caleb Landry Jones gives a chilling performance playing him. He won acting awards both at Cannes and at Australia's Academy Awards, where the film won eight of the top prizes. For Justin Kurzel, the director, the film is a call for even more gun control. The laws were tightened after this shooting and yet there are more guns now down there than ever before. (On demand) 3 ½ out of 5