Your Downton Abbey friends are back; a Parisian couple struggles with old age and a visionary offers wise words to live by 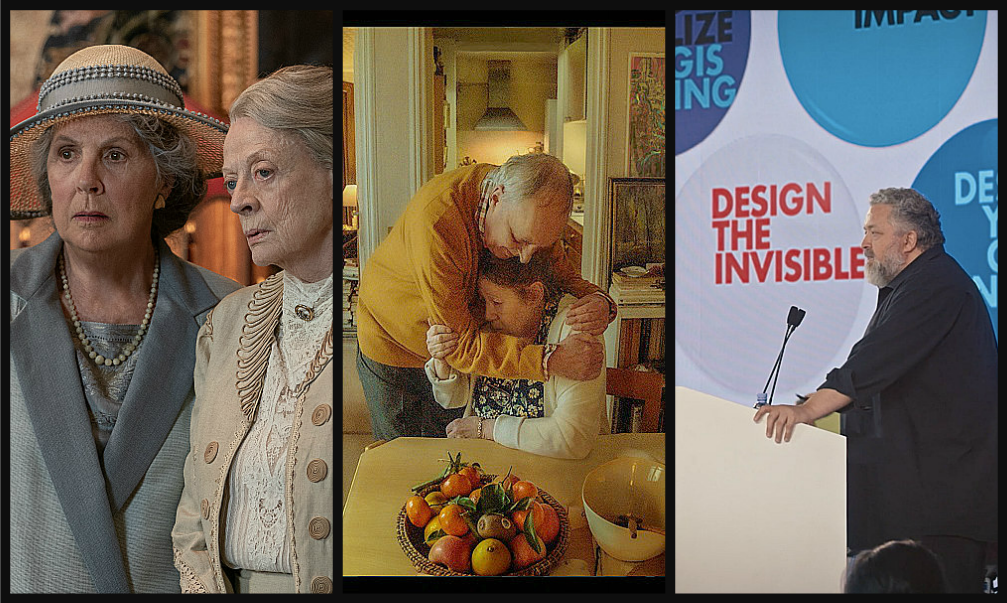 Also: a cryptic view of Men, an Indigenous fight for land, and mild fun x2 from Disney
Previous story

You've got a lot to choose from this week but before we get to them, here are some more.

Two films I've written about before are now back, available VOD and digitally.

Into The Weeds is Jennifer Baichwal's excellent documentary about one man's successful fight against Monsanto. He claimed that their pesticide Roundup caused his cancer. A court's ruling was momentous.

Marlene is a dramatized detailing of how the wife of Steven Truscott, fought to clear his name. He was wrongly jailed for murder,

And check out this one at CRAVE: The Staircase stars Colin Firth in a true story of an American accused of murder. Half of its 8-episode run is already streaming. They're about an hour each, and terrific, as is he.

And read about these:

DOWNTON ABBEY: A NEW ERA: Older film fans are invited back onto the theaters with this second movie offshoot from the big-hit TV series. The first was almost three years ago (pre-COVID) and it was a sizeable hit. The producers have done all they can to give this one a matching chance. The favorite characters (almost all, anyway) are back and there are two new story lines that are plausible and don't feel tacked on.

Story one explores a little more of the backstory of Maggie Smith's character Lady Grantham. She inherits a villa in France and most everyone wonders why. Many of the cast go on a visit there, which gives the film a welcome widening of its vista. It also raises questions about at least one member of the family. While that crowd is away, a film crew arrives to make a movie at the Abbey. The industry is changing; films now are with sound. A vain actress (played by Laura Haddock) is worried; her co-star (Dominic West) is not. The future has arrived at the Abbey, where pretty well everything else has been in some kind of idyllic earlier time. The servants even get to attend a wedding and in the movie production sit as extras around a huge dining table. Change is creeping in and even brings a sad event later on. In other words, you'll get pretty well what you expect. Director Simon Curtis and writer Julian Fellowes bring it in one more time. (In theaters) 3½ out of 5

VORTEX: The director is famous as a provocateur. This film is not so, it is an absolutely sincere study of old age, no exaggeration or pretense; just a clear-eyed and stunning look at what's to come for all of us. It stirs up dread and occasionally lightens it with pure humanity. It's also the best representation I've seen of dementia. That subject comes up quite often these days but rarely this authentically. The only gimmick here is a technique in presentation. The whole film is done in split screen. We watch an aging couple in their apartment in Paris , she in one picture, her in the other, usually together, sometimes away from each other. The effect emphasizes the separation that's getting wider between them. It's a chilling vision of the future.

She (veteran actor Françoise Lebrun) has dementia, wanders around the apartment as if looking for something, and in one scene wanders outside, into a store and through densely packed aisles. She's walking aimlessly. Her husband (played by Italian director Dario Argento) is frantic looking for her. “It's a dangerous city,” he says. “The world is full of madmen.” Maybe but the threats here are natural: losing your faculties and then death. She doesn't recognize her home, or her son who comes to visit. Her husband is writing a book about film which he says are all dreams. He won't go to an old-age home, as the son suggests, because “I don't throw away my past.” Meanwhile, he says, they're both slaves to the many drugs they take. This film is a true representation, at least from what I've seen, of very old people. It's immensely moving. (Art house theaters like VanCity in Vancouver) 4 out of 5

MAU: Design is the solution to the world's problems. We created them after all, in effect designed them. We can rid our selves of them, with design. Airy fairy words by a would-be prophet? Maybe, but quite convincing coming from Bruce Mau in this film. Much of it is just him speaking right to the camera, like a lecturer, but immensely interesting and emphatic. He's a graphic designer himself and seems to be targetting all manner of issues with his methods. Sustainability, even climate change, included.

His personal history is most interesting. He's from a farm near Sudbury, Ontario and has been hired for projects far and wide. Design work for Coca Cola, for the Museum of Modern Art in New York, and get this: re-design Mecca and also re-do the national image Guatamala. He wrote a book with starchitect Rem Koolhaas and summed up his ideas in an exhibition at the Vancouver Art Gallery. Ideas, but no tools, the critics said. He planned another in Beijing to provide them, but a diplomatic row called off that show. Still, he's absolutely fascinating to listen to. In his view, design is activism. Think what has to be done, start doing it and that's design. He comes off as an inspiring philosopher. (In theaters: VIFF Centre, TIFF Bell Lightbox, also Hamilton and Waterloo) 4 ½ out of 5

MEN: This is a nifty puzzle of a movie, stocked with symbolism, open to interpritation and sure to bring on much discussion afterwards. That makes it better than so many films these days, the ones that don't stay with you more than a few minutes. This one does stay. It deals with unerving thoughts that the central character has and can't explain. It's like a horror film, with little horror, but a lot of unease.

Jessie Buckley is trying to get over a tragedy and travels to a village in the English countryside for some rest and quiet. Good luck. Out for a walk in the woods, she sees a naked man, who later seems to be peering at her through the mail slot in the house she's rented. Earlier she had walked into a tunnel, enjoyed yelling and listening to the echoes but got out fast when she saw a figure way down at the other end start coming her way. Is it hallucination? Visions brought on by fear? She certainly feels menace from every man she meets in the village, most of them played by Roy Kinnear, all of them judging her. The worst is a leering vicar. Writer-director Alex Garland touched on similar themes in a different way in his film Ex Machina. This one is just as hypnotic. (In theaters) 3 ½

CHIP 'N' DALE: RESCUE RANGERS: If you've never before seen a film that pokes fun at Hollywood, you might take this as satire. It tries, but the jabs are so obvious and the jokes are so weak that it will more likely have you wondering why am I watching this. Answer: You've been drawn in by the cool cast they've assembled: John Mulaney and Andy Samberg voice the chipmunks, Chip and Dale, while Seth Rogen, Eric Bana, Will Arnett, J.K. Simmons, Keegan-Michael Key are heard and/or seen, among many others. Kiki Layne appears live-action as a cop who is also a fan and even Paula Abdul is there, very briefly. More amusing are the many cartoon characters that appear, Disney or not: notably Peter Pan, Lumiere, Sonic, He-Man, Voltron, My Little Pony, Roger Rabbit whose movie mix of live action and animation this film copies.

In this story, Chip and Dale aren't best friends anymore. Their TV careers are over. Chip sells insurance; Dale, who has had “CGI surgery,” appears at nostalgia conventions. But they re-unite to find their friend Monterey Jack, from their old TV show. He's been kidnapped. It seems a gang sends toons like him to Asia to make cheap bootleg animated films. Batman vs E.T., anyone? Mr. Doubtfire? Kids aren't likely to get the goofy humor; fans of animated film history may. This is for those who fondly remember that 1980s TV show and, want a hardheaded update. It's zippy, is full of insider jokes but needs to be funnier. (Disney+) 2 out of 5

THE VALET: It's mild, it's pleasant, it'll work as an amiable time-waster one evening and as a distraction from your worries. That's the chief benefit I can find in this re-make of a French film from 2006, which may have had a bit more bite than this mild rom-com. The story is pure screenwriter construct: a famous movie star is photographed by the paparazzi with a married man she's having an affair with. This could be a disaster. Her reputation and his marriage are on the line. She (Samara Weaving) could lose her career; he (Max Greenfield) could lose millions in a divorce settlement. Her lawyer has a solution: there's another guy in that photo, a Mexican immigrant car-park valet (Eugenio Derbez). Say it was him she was with and all will clear up.

He has to be convinced to be her date for a movie premiere. His friends have to be convinced he could get with someone like her. Fans have to believe. And there are further complications. The man is a property developer in Los Angeles with his eye on a lower-class Latino neighborhood for gentrification. People in the area are holding meetings to oppose him. The valet shows the actress around and she responds to the community charm. Two detectives are watching them, and photographing. What's real and what's phony are in competition in this warm-hearted film. (Disney+) 2 ½ out of 5


KLABONA KEEPERS: We've been seeing quite a few documentaries about Indigenous people fighting to save their land (Site C, The Amazon, just recently) and this is one of the best. It takes us to a fight that doesn't get much attention these days but seems to be on going, and could break out again. Back in 2005 there were blockades and forced work stoppages as elders in Northern B.C. campaigned against a giant coal-mining project by a company called Fortune Minerals. It would be right in or near the headwaters of three major rivers and threaten the fish and drinking water. In the Tahltan language, Klabona means headwaters (KLA) and open country (Bona).

The film shows many of the elders explaining what's at stake. “Our land is being taken away by white people.” “I will fight for our land”. And in one confrontation with miners: “We're not going to let you pass.” There is film of these scenes; they include RCMP, company men and even a CEO explaining their side. And as assembled by the directors, Tamo Campos and Jasper Snow-Rosen, it's clear that the memory of residential adds power to these protests. (Playing in the Human Rights Watch Canada Film Festival, both in theater in Toronto, and streaming online) 4 out of 5