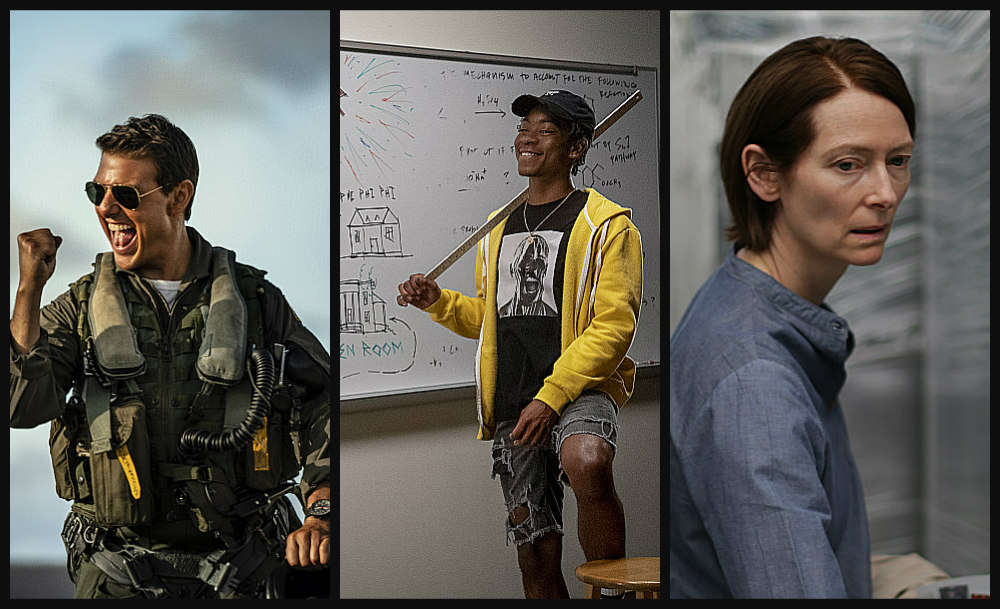 Also: the joys of community bookstores and Anthony Hopkins in one of his lesser works
Previous story

There's no doubt what is the big film of this week. The new Top Gun is poised to be mammoth and restate Tom Cruise's star power. Anthony Hopkins, Tilda Swinton and others are here in new films but missing are two titles the Disney people didn't provide access to. Bob's Burgers, based on the long-running TV show, was only previewed in Toronto, and the preview for Obi-Wan Kenobi, the new Star Wars/Disney+ series that starts today (Friday), wasn't provided until after my deadline. Maybe next week.

And last week I recommended the series on Crave called The Staircase, starring Colin Firth. Netflix has got the documentary series it is based on, and it looks like Crave may run it too. It's interesting to watch both because they have different slants at times and some scenes are thin in one and better explained in the other.

And elsewhere we have these:

TOP GUN: MAVERICK: Tom Cruise said he didn't want to make a sequel to his mega-hit Top Gun because it would be a glorification of war. Well that was a long time ago and here, 36 years after the original we get that sequel. It's sleeker, faster and many ways better than the first, but you have to put political thoughts aside to enjoy it. These characters are sent to bomb an independent country, unnamed but we can guess. Trump comes to mind because of some of the things he said. The target isn't military, either, it's an unauthorized uranium enrichment plant, deep down a valley between two mountains.

Maverick, Tom Cruise in real life, is still only a captain after all these years and still disliked by the brass (Jon Hamm playing the brassiest of them) but he's put to teaching a new group of hotshot pilots and prepare for this one mission. That's one way to bring back a character now that he's much older. New for our time, there's now a female pilot in the class (Monica Barbaro) and for continuity a pilot who connects back to the first movie. That's 'Rooster' Bradshaw, played by Miles Teller. He blames Maverick for the death of his father (nicknamed “Goose”) and the main story line here is about that lingering resentment, and maybe overcoming it.

No mention, though, of Maverick's great love interest in the first film. He now takes up with Jennifer Connelly as a woman who was mentioned, briefly. What happened? We don't know. We do know that their relationship is sweet and that the film around them is big, sleek and colorful. It's like a military movie from the 50s, no politics, but lot of interpersonal stories among the characters. And the buildup to the mission. Recruiting offices are open. (In theaters) 3 ½ out of 5

EMERGENCY: We've had horror films that examined racial issues in the US. Why not get the same from a another regular pop genre: the high school party comedy?The combination works amazingly well here. It's still funny, but the background and the comments about systemic racism that come with it give this film depth. It all starts the evening two pals are about to celebrate their graduation by setting a new record for getting to student parties. They're black, their other roommate is Latino and there's real danger when they find a white girl drunk and passed out in their flat. They debate what to do? Dump her on the lawn of a nearby fraternity and let them deal with it? Too crass. Call 9-11? No, the cops will come, they'll misinterpret and maybe start shooting.

Best idea: drive her to a hospital. And with that we start a wild night of adventure, party hi-jincks, CPR to try to revive the girl, shunning by people along the way, a visit to a brother's house where stereotypes are confirmed and pursuit by two groups. The girl's sister, and two friends, are looking for her. They're sure to misunderstand the situation too. Cops come in two cars having been tipped off by some helpful citizens. That's the bare story. Along with it we get many little details of how the two black guys (RJ Cyler and Donald Elise Watkins) see society against them. They're college-bound and respectable but, you know, black. Directed by Carey Williams and written by K.D. Dávila, a Mexican American who won a big award for her script at Sundance. (Prime Video) 4 out of 5

MEMORIA: I was warned that this one is long and slo-o-ow. It is slow but I found it fascinating to watch and try to figure out what it was saying and leading to. I'm still not sure but the mental exercise was mesmerizing, at times even invigorating. And the acting and the settings are first-class.

Tilda Swinton plays a woman on a trip in Colombia who starts hearing unexplained noises. They come singly, like a loud clump or bump, a ball falling with an earthy flavor, as she describes it to a sound engineer trying to re-create it at a studio mixing board. He manipulates sounds from a movie effects library, gets it it right but Tilda still has to figure out what causes it and what do do about it. A doctor asks about her mental health and recommends pills, but not Xanax which she says dulls you to beauty and empathy.

An archeologist talks about memory embedded in fossils. A long sequence with a man cleaning fish expands on that. What the answer is doesn't become definite. Repressed memory? The memories embedded all around you? The natural world you should be more attuned to? All of that? Thai Filmmaker Apichatpong Weerasethakul is as enigmatic and dreamy as ever (e.g. his famous Uncle Boonmee Who Can Recall His Past Lives.) It's intriguing if you're patient. (It's touring art house theatres, currently at two in Vancouver and more across the west) 3 out of 5

HELLO, BOOKSTORE: Say that like you're answering a phone in the store. It happens quite often as Matt Tannenbaum holds forth in a well-stocked, and apparently well-loved store in a small town in Massachusetts. He welcomes people in and often deals with them through an only-partially open front door (because of COVID). But much of the time he talks to us, about the books he loves, where he got his start (a renowned NYC store) and almost anything that pops into his mind. The authors, for instance. Other booksellers. Even Alice's Restaurant. And the night he delayed getting out of his car to get the woman he was dating because Molly Bloom on the audio book he was playing was far more interesting.

He's a bit long-winded but affable. That comes out both in dealing with us and his customers. So much that when the pandemic hurt bookstores like his and he was in danger of going out of business, they started a go fund me campaign to keep him able to pay his bills and stay open. That and the entire film testify to how important stores like his are in a community. The best can be a gathering place, friendly and personal. Much valued. (Playing at art theaters like the Van City in Vancouver) 3 ½ out of 5

ZERO CONTACT: To me this is a mystery, in part. It's “one of the very first NFT movies” says a publicist but what does that mean? The non-fungible token is a form of digital art. This looks like a movie . The main difference I can see is that it's mostly of a zoom meeting. Five characters who used to work for a technology guru played by Anthony Hopkins (one of them is his son) discuss why they admired him so much and what to do with one of his creations? Re-activate it? Or leave it alone? Somebody has called them all together from cities all over the world to consider starting it up again.

Problem: it could damage the “electro-magnetic shield around the earth.” Possibility: it could enable time-travel. As they consider all that they get the feeling that somebody else seems to be listening in on the call. We do see a wall of monitors at one point. And one character sees a hooded figure skulking in his backyard. Another makes calls to the inventor's former security chief. That guy talks to the inventor's sister. There are rumors of financial crimes and there are murders. Now and then Hopkins is on screen pontificating about “interconnectedness,” sometimes while playing piano. Flashbacks? His character has died, we know All the while a countdown is on for all to enter their secret password or the plan collapses. The director, Vancouver-born Rick Dugdale, easily works in details and visual effects that computer users recognize. The story has glitches too, though. (Available on demand) 2 ½ out of 5