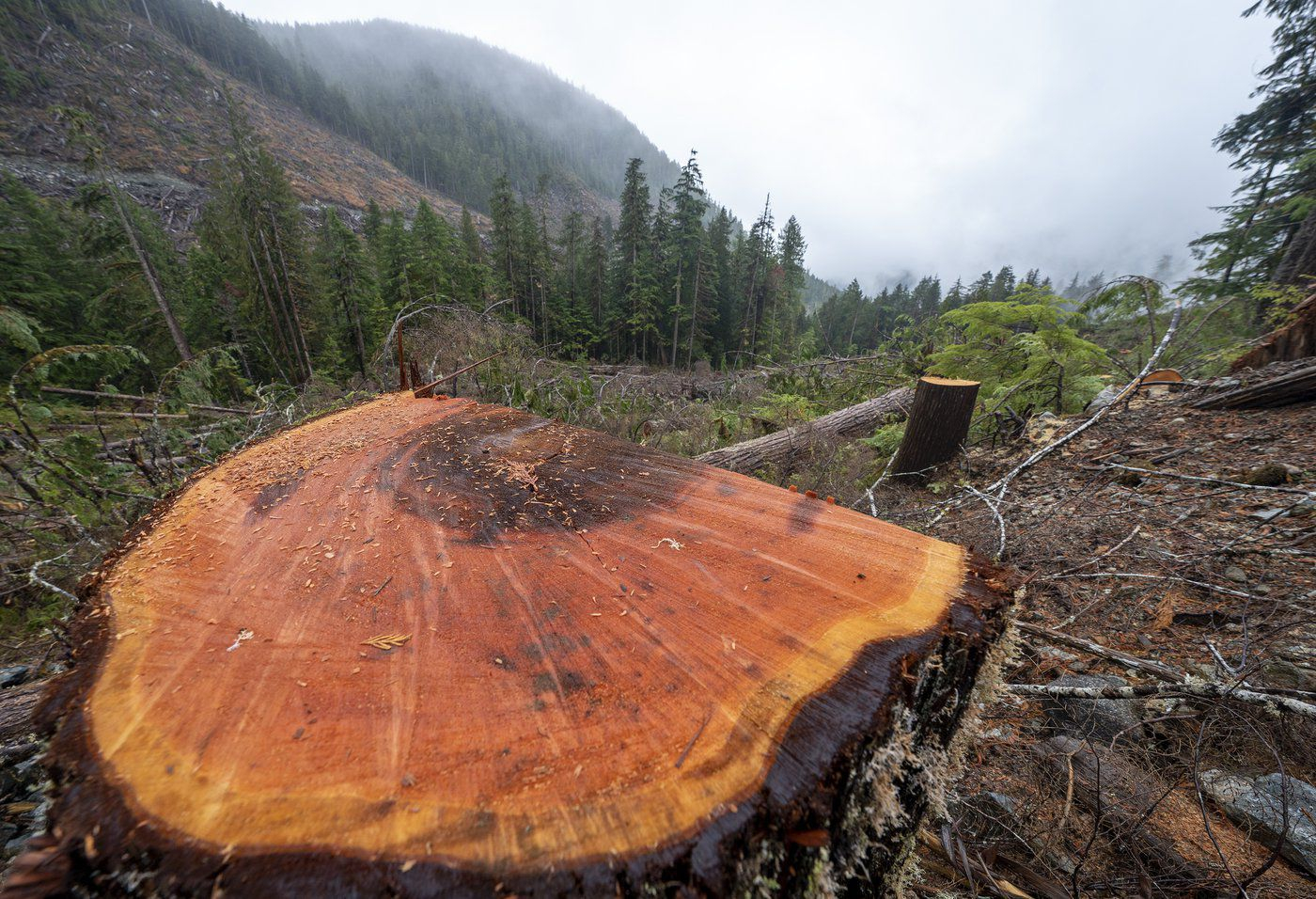 A fresh cut stump is pictured in a cut block in the Fairy Creek logging area near Port Renfrew, B.C., on Tuesday, Oct. 5, 2021. File photo by The Canadian Press/Jonathan Hayward
Previous story
Next story

A process is underway in British Columbia to temporarily defer logging in priority old-growth forests, allowing time for the government to work with First Nations to decide how they should be managed in the long term.

The province appointed a five-member panel of ecologists and forestry experts who identified 2.6 million hectares of unprotected old-growth forests at risk of permanent biodiversity loss in mapping released last November.

At the same time, it asked more than 200 First Nations across B.C. to decide whether they supported the deferral of logging in those areas for two years.

Forests Minister Katrine Conroy has said that overall, about 80 per cent of the total 4 million hectares of at-risk old growth identified by the panel is not currently threatened, either because it was already set aside from logging, it's been deferred, or it's not financially viable to harvest in the current market.

B.C. could defer logging across the vast majority of unprotected areas identified as being at risk of permanent loss, and it could "still cut the heart out of our forests by removing what's left of the biggest trees," Price said.

"That's what's been logged the most and it's where harvest is targeted," Price said of the biggest old growth on highly ecologically productive land.

Those forests provide important habitat for wildlife, including endangered species, along with storing massive amounts of carbon and helping to mitigate drought and flooding through water filtration, she said, describing big, valley-bottom old growth as "the circulatory system of the landscape."

"We need to maintain those, and we are not," she said. "We're down to a very small number."

In order for the deferrals to be meaningful, Price said she feels they must be within the timber harvesting land base, referring to areas the province has estimated are economically viable to harvest in the current market for wood products, and especially where logging was already slated to go ahead.

The Canadian Press asked the Forests Ministry to break down the province's publicly announced old-growth deferral numbers in greater detail.

2.6 million hectares. The area of at-risk old growth that was not set aside from logging, about half of which is within the timber harvesting land base.

204. First Nations asked whether they support deferrals in those areas, with 75 agreeing so far and more than 60 asking for more time to review the plan.

50,000 hectares. The area within the 2.6 million hectares proposed for deferral that overlapped with logging permits approved before November.

7,200 hectares. The area amounting to nearly 90 football fields that's been logged out of the 2.6 million hectares of at-risk old growth since November.

1.05 million hectares. The area of old-growth forests identified as being at risk of permanent biodiversity loss deferred between November and April.

904,000 hectares. The area within those deferrals that's classified as "big-treed," with portions that are also considered remnant and ancient.

563,000 hectares. The portion of the 1.05 million hectares deferred so far that falls within the timber harvesting land base.

258,000 hectares. The area within the 1.05 million hectares of deferrals where BC Timber Sales, the agency responsible for auctioning about 20 per cent of the annual allowable cut on Crown land, has paused its advertising and sales where discussions with First Nations about deferrals are ongoing.

25,500 hectares. The total area where cutting permits overlapped with the 1.05 million hectares of deferrals, representing what Price considers a meaningful deferral because logging was already slated to go ahead.

1.87 million hectares. The total area deferred from logging, including at-risk areas identified last fall, along with 198,000 hectares deferred in fall 2020 and an additional 619,000 hectares set aside at the request of First Nations.

The biggest old-growth trees are "so much more valuable standing," she said.

In addition to providing irreplaceable habitat for many species, from the smallest fungi to grizzly bears and endangered caribou, the old giants in B.C.'s coastal and inland temperate rainforests store massive amounts of carbon, playing a key role in helping to contain climate change, she said.

"When you harvest them you're releasing three quarters of that carbon into the atmosphere in the short term," Price said in an interview. "So, leaving those trees standing is actually critical to meeting our emissions targets."

Old-growth forests are also "living sponges," she said. They absorb moisture and release it slowly, helping to mitigate both drought and flooding.

"That function is critically important in adapting to climate change."

The forests minister has said B.C. is following the recommendations of an independent review of old-growth management released in fall 2020.

The two-year deferrals are a temporary measure aimed at preventing irreversible biodiversity loss while the province works on "a whole new approach to sustainable forestry management," Conroy said in an interview.

The province is moving toward forest landscape planning, she said, which means looking at entire ecosystems rather than at trees as a commodity.

This report by The Canadian Press was first published May 28, 2022.

How does a statement like ‘80% of old-growth at risk of “permanent biodiversity loss” is not currently threatened’ help anyone understand logging deferrals? At risk but not threatened? Huh?

Who is Karen Price and how is she an “independent member” of the expert panel reporting on deferrals? How does her statement that old-growth helps to contain climate-change qualify her as “expert?”

And what is to be made of Price’s spurious statements that logging old-growth releases 75% of its stored CO2 “in the short term,” and that preserving it is “critical” for meeting CO2 emissions targets? It’s as if she dismisses regenerated forests as absorbers of CO2 —or perhaps that “permanent biodiversity loss” means growing (regenerating) forests don’t count, in emissions terms, even though they absorb CO2 at a far, far greater rate than old-growth forests do given that old-growth is by definition at full CO2-absorption capacity and, in most cases, old forests are actually net emitters of CO2 due to fungal decay.

Or was Ms Price taken out of context? It’s hard to tell by the article’s confusion of stats, overdoses of qualifiers, and eclipses at risk of going permanently out of orbit. Indeed, this article is a good place to start misunderstanding old-growth deferrals .

I would surmise, as would

I would surmise, as would anyone without a vested interest in logging everything for short term profit, that Karen Price, as an independent member selected to the EXPERT panel would have a lot more expertise on the subject than someone spinning industry talking points, and deliberately confusing the issue. For example, how do replanted seedlings that take decades or even 100's of years to grow to replace old growth possibly come close to absorbing as much CO2 in the short time frame we have to limit out of control climate change?