MOVIES: A strong line up this week with Elvis, Emma, The Long Rider and more 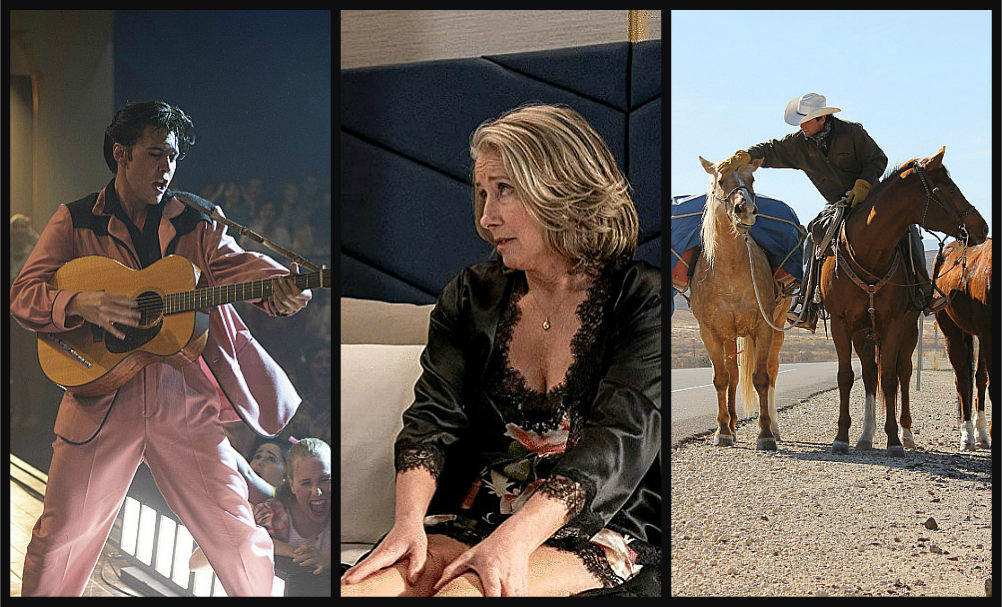 Including The Man from Toronto, Inuit girls battling aliens and Ethan Hawke as “The Grabber”
Previous story

Summer. Outside fun. But wait a minute there is so much new to see inside. Along with the new ones I review below, there's Official Competition, a send-up of movie people starring Antonio Banderas and Penelope Cruz. It's in a few theaters. Also these three have just started streaming on CRAVE: Drive my Car, the big Oscar winner, the tuneful Sing 2 and the New Yorker-inspired look at the news business, The French Dispatch.

And I review these new ones:

Good Luck to You, Leo Grande: 4

ELVIS: It's not that clear what this new biopic is trying to say. Elvis Presley's life story has been told before several times. That it's shown through the thoughts and narration of his manager, Col. Tom Parker, is an innovation but with what message? Don't take on a carnival barker to manage your career, is the best I can come up with. He lies and hypes and uses you and then tries to justify it by saying he made you the big star you are. All true, but the dynamic between the two men is underplayed, until the inevitable breakup in the last half hour of this very long film. Before that you wonder why Elvis didn't see through him and want to break away before he did.

What the film does splendidly, sometimes frenetically under Baz Luhrman's direction, is show the rise of Elvis, from a poor boy watching black singers like Arthur “Big Boy” Crudup in Tupelo, Miss. Then as a young man on Beale Street in Memphis where he imagines a pep talk riddled with race-resentment from B.B. King. Then on a touring country show with Hank Snow griping he shouldn't be on it. But he turned on the crowds and Austin Butler captures the look, sound and sexual gyrations of the future king exactly. Col. Tom, who was not a Col. nor a Tom but is played with snake-oil salesman smarm by Tom Hanks, took him on and sent his career spiralling up. He got him on TV, on to a much bigger record label and, in response to the moralists' and racialists' criticism, created “the New Elvis.” He's a good boy, who did his army duty and came back for a decade of bland Hollywood films. They eventually faded and the film has two of its best sequences in showing the creation of his famous Comeback TV Special and his Las Vegas show. They throb with life and energy, as do a few other sequences. Nit pickers will notice a few factual errors but fans, in this case probably the older movie-going crowd, should enjoy the film. (In theaters everywhere) 3 ½ out of 5

GOOD LUCK TO YOU, LEO GRANDE: This highly, highly engrossing drama sprinkles in a host of women's concerns in its short hour and a half running time. Emma Thompson speaks them with such feeling that you take them as authentic, and not at all a feminist lecture. The script by Katy Brand, as directed by Sophie Hyde from Australia, is direct, not hectored. It's a natural expression from a mature woman. She's been a dutiful wife and mother but now as a widow thinks about what she missed.

She hires a young sex-worker to find out. Surprisingly, as played by Daryl McCormack, a regular on the series Blinders, he's thoughtful and well-spoken, a plus for her, a retired school teacher. He's also a stud, but we don't see much of that activity, though a very late nude scene by her has been widely noticed. No, most of the film is talk, bright, literate and captivating. She regrets the strict lessons she taught in her religious education class, the sex she never took pleasure in and mostly this: “I've always been ashamed of myself.” He meanwhile, says he lies to his mother about his work, though he's proud of it. “Pleasure is a wonderful thing,” he says. They act out some of it, but their talk about it is smart, engaging and very-well delivered. The film started on Prime Video last week and as far as I've seen, doesn't seem to have been promoted or reviewed in Canada. It'll be noticed come awards time. 4 out of 5

THE LONG RIDER: This documentary told me about a sub-culture I wasn't previously aware of -- people who take very long rides of horseback. There seems to be an organization leading it and, according to this film, a lot of drama involved in it. This is not just a vacation trek we see here, in an epic journey from Calgary to Brazil. That's thousands of kilometers and through 12 countries, many with arcane border rules. The film culls from footage taken during the trip and afterward to give us a gruelling and at times a highly dramatic experience. It's ably directed by Sean Cisterna.

Filipe Masetti Leite did the ride, shot some of the film and offered this advice: “More people need to not be scared to do things they love.” His parents moved to Canada from Brazil, when he was aged 9 and he set out to go see where he came from. Surprisingly, he was loaned two horses, eventually a third one, to make the trip and much of the film explains how he bonded with them. Long riders always have to put their horses first, we are old. Lack of water in a desert stretch was one major challenge. Border guards who won't let horses across made problems in some countries, but there was sometimes a secret trail to by-pass them. Another caution: never accept help from drug cartels. Felipe encountered all these issues, and more, and they make for an enthralling and at times thrilling trip. You can only wish you could take one like it on a summer vacation. (In theaters: Toronto now, Calgary July 1 and 17 other cities across Canada July 8) 4 out of 5

SLASH/BACK: Don't mess with the girls of Pang. That's the triumphant message of this newest entry in the genre of Indigenous horror and science fiction films. Pangnirtung, is an Inuit hamlet of only 1,481 people near the Arctic Circle. Or as one character puts it: “A million miles from anywhere.” That doesn't deter a bunch of alien creatures that come and take over the bodies of fishermen and others. We presume they're from outer space but come off like zombies. They skulk and stumble along and when agitated send snake-like tentacles out of their eyes and other openings. Clearly, director Nyla Innuksuk has been influenced by American creature films.

In the town, it's up to a small pack of girls to fight back. Maika (Tasiana Shirley) is their leader. In an opening scene when she was younger her grandfather taught her to use a gun and not be afraid. She'll put that knowledge to good use. Another find s knife slash to the throat is effective. The aliens are in a polar bear, which explodes and an RCMP cop, who threatens. That's after he smokes a joint, a detail that perfectly characterizes the tone of this film. These teens are sassy and defiant. The film they're in is basic in execution, but has good tension and great scenery. ( It's in arthouse theaters in six cities: Vancouver, Toronto, Ottawa, Winnipeg, Edmonton, Saskatoon and Kingston) 3 out of 5

THE BLACK PHONE: It's summer time and hot for a low-budget, scary horror film. The style is popular right now thanks to the hit series Stranger Things and the always-there writings of Stephen King. OK, how about one written by his son, Joe Hill, directed by Scott Derrickson, no stranger to the style, and starring Ethan Hawke. He is new to this, I think, somewhat out of place and hidden behind a grisly mask which saves him from too much embarassment. His appearance is nutty and what he does is only a little less so. He lures teens in a small Colorado town with black balloons, imprisons them in a basement and opens the door now and then to taunt them. Teens call him The Grabber.

We watch one boy (Mason Thames) experience that while his sister (Madeleine McGraw) has dreams about it but can't get the police or her father to take her seriously. The boy meanwhile answers the phone, which his captor says doesn't work but we hear voices on it offering advice what to do. They're calls from previous victims, now dead. Smash a hole in the wall suggests one but that doesn't lead anywhere. It takes a while to figure out what's going on, lots of time to mope about unthinking authority figures, dads and the teenagers they simply dismiss and occasion enough to wonder why there isn't more horror and suspense, like dad Stephen would have given us. This film is only middling. (Theaters everywhere) 2 ½ out of 5

THE MAN FROM TORONTO: Another summertime staple is the buddy comedy, preferably if the two are wildly different and have to learn to get along. Woody Harrelson and Kevin Hart certainly are that, probably in real life too. Woody plays a thug so good at intimidation that he can get anybody to talk. There seems to be a network of these; the film mentions or shows others from Tokyo, Miami and even Vancouver. Kevin plays a screw-up entrepreneur who tries to sell exercise programs in video ads. One idea he has is "contactless boxing" which you can imagine leads to recurring jokes.

The two get mistaken for each other at an airport, have to flee and somehow get involved with the FBI and CIA against a plot on the US by a government opponant in Venezuela. I think that's right. It's kind of involved and not credible. But the film is speedy and dumb but summer fun and if you're from Toronto you can catch local landmarks like the Gardiner Expressway and nearby burgs like Brampton and Mississaugua. Woody is ironic as he's won't to be and Hart is his usual motor-mouth ranter. (Netflix) 2 ½ out of 5