MOVIES: about millennials' problems, a sky-borne thriller and a call to dare fate 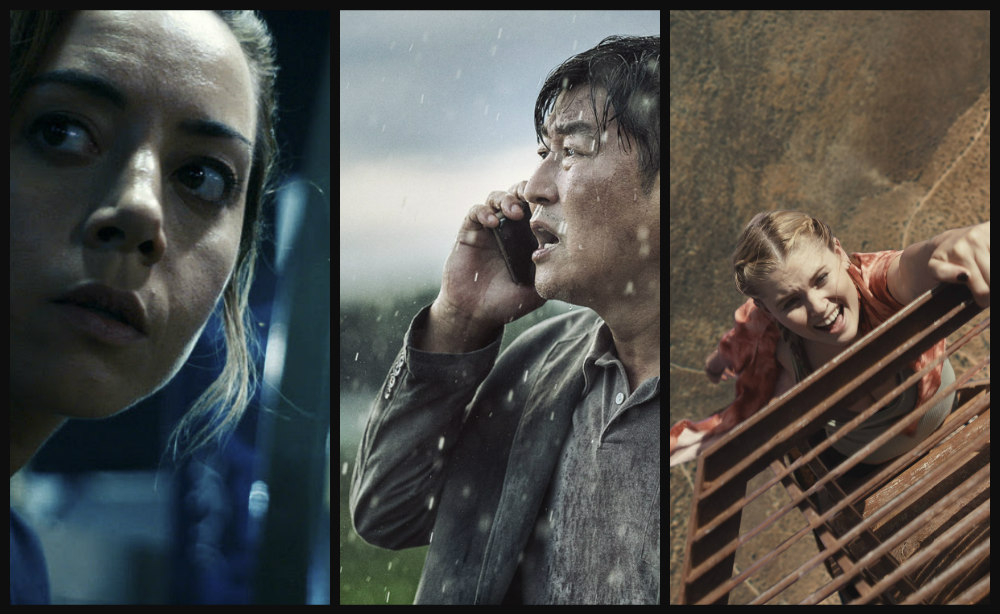 Everyday we get new word of what's going to be at the Toronto International Film Festival. One of the early announcements was that Stephen Spielberg will be there with his new film. That's a first for him. Lately we heard about a film on the downing of a Ukrainian airliner two years ago and a biography of Buffy Sainte Marie and a new film by Mary Harron in which Ben Kingsley will play Salvador Dalí and currently disgraced Ezra Miller will also appear. TIFF is on for 11 days starting Sept 8.

Meanwhile, there are these movies now showing.

EMILY THE CRIMINAL: Well anyone could be drawn to be one if she has a huge student debt, no degree, a nothing job delivering food orders for a restaurant, only an unpaid internship on offer after an interview, and a minor criminal conviction in her background. And worse: no sign of anything better in her future. That's the woman Aubrey Plaza perfectly portrays in this tightly written, terse little drama. In a sense it's a picture of many millenials these days, as envisioned by writer-director John Patton Ford.

When Emily is told of a way out, with the chance of making $200 a day, she takes it. Maybe, feels she has to take it. It's a credit card scam, run by a Lebanese immigrant Youcef (Theo Rossi) and a cousin who seems to control things from the background. They produce fake credit cards, send Emily to buy big items in Los Angeles stores and then sell them from the trunk of her car. There's a protocol, which she inadvertently breaks. Then the people in behind steal from her and she devises a plan to steal from them. So she's becoming an even bigger criminal and her world is becoming more dangerous. It's a riveting story, reflecting a true situation for many and proof again of how well Plaza represents her generation with her acting talent.(Cineplex Theaters in a few cities: Toronto, Montreal, Vancouver, Edmonton, Calgary, Ottawa, Winnipeg and Victoria) 4 out of 5

EMERGENCY DECLARATION: The title of this Korean film doesn't tell much about the thrills to come. It's used in the airline industry when a plane is in trouble and in this case the trouble is extreme. A young man has brought a virus on board a flight from Soeul to Hawaii and 121 passengers are in danger of becoming sick. But where can the plane land? The U.S. and Japan say no and Korea may be too far to go back. That's the basic plot but there's much more. Also in there is an international corporation, a secret research project and a backstory that I won't spoil for you. And most importantly a couple of fears we've all lived with for a couple of years now: confined spaces and infected people. They add up to 2 ½ hours of relentlessly-building tension.

We're warned about turbulence early on and sure enough it comes. At its height it rolls the plane over a few times in midair. Passengers not strapped in end up on the ceiling. That's far fetched and a bit silly but it shows the lengths that director Jae-rim Han is willing to go to unsettle us. There's another airline stunt later on that's just as stressful. The film goes for sensation over and over again, big and small. It's best not to give too much of that away but we get both what happens on the plane, with the pilot, a former pilot and the head flight attendant trying to prevent panic, and on the ground. The transportation minister (Jeon Do-yeon) has to take charge and a policeman investigates. He's played by Song Kang-ho who you'll remember as the dad in the Oscar winner Parasite. This film's not a winner like that, but it's a good ride. (In theaters) 3 ½ out of 5

FALL: In one sense this film is kind of ludicrous. It's also an in-your-throat thriller. Imagine it: a couple of young women climb a 2000' metal tower out in a desert somewhere. It's as tall as the Eiffel Tower, is said to have a TV function but seems to only have a nighttime light on top to alert airplanes. A sign says don't trespass, death could result. That's the story right there. So of course, Becky and Hunter are going to climb up. Why? Becky (Grace Caroline Currey) is a U-tube blogger who videos dangerous exploits. “If you're scared of dying, don't be afraid to live,” she says.

Hunter (Virginia Gardner) has a deeper reason. In an earlier scene she lost her boyfriend who fell from climbing a sheer rock face. She has his ashes and wants to scatter them from up high. So, they climb. There's a ladder which suggests it won't be hard but halfway up the bolts are loose, the ladder sways, parts of it fall. Vultures comes sniffing around because one of the women now has a bleeding wound. Later there's a windstorm, they can't get down and they can't call for help because there's no cellphone service. They do have a drone but the battery is low. Director Scott Mann keeps throwing impediments and problems like that at them to grow the thrills for us. Oh, and Becky learns a hurting bit of information about Hunter. That adds to the ordeal too. Still, as one of them says: “Life is short. You've got to do something that makes you feel alive.” (In theaters) 3 ½ out of 5.

ARRANGED MARRIAGE: There have been several films on this same subject: young women in the South Asian community fighting off their parents' choosing who they should marry. This one, filmed in Los Angeles with a Canadian in the lead,is surely one of the most extreme. There are kickings and stompings, a car explosion and two murders. There's a very controlling dad, a compliant mother and a violent cousin and his pals all objecting to Kamali seeing a Clive, a white man. As mom says “Their system is different than ours.”

Her family shows how different with a surprise party for her which is actually an engagement party. They've chosen a man from a good family for her, a future sanitation engineer who appears to be a boring dweeb, or as Kamali calls him, a nerd. She's relatively westernized and works at a shop called Bikini World. The boss refuses to fire her and suffers the consequences. Her boyfriend says it's an “accepted method of conflict resolution in her society” which seems overly tolerant. She meanwhile wails “I am finished. I am damaged goods. Nobody will want to marry me.” That seems overly pessimistic. She's a rebel, after all. The whole film has that problem. The issues are real, the bad events happen, but writer-director Anoop Rangi exaggerates them.

Megha Sandhu as Kamali almost saves the film. She's from Montreal, a former Miss Teenage Canada and runner-up in other contests and gives a sympathetic performance. 2 ½ out of 5

AINBO: with the added words “Spirit of the Amazon” is a child-level excursion into ecology and the need to preserve the natural world. It's best for the older ones, teens even, because the story has twists and metaphors that may bewilder more than educate. For instance, giant machines are digging up the rainforest but is it the greed of the white man in charge or an ancient demon causing the damage? Or are they the same, metaphorically? It's not definitely clear or straightforward. But allow for that and you're in for a beautifully animated adventure with a gutsy young woman in the lead.

Ainbo is 13, self-styled as the best hunter in her village though prone to comic mishaps. With two spirit guides, a tapir and an armadillo, she sets out to save the village from logging (which is also killing the fish) or, if you look at it another way, from Yacuruna, an ancient demon. The people don't believe in him anymore and Ainbo has to get to a giant turtle named Motelo Mama for help in reviving the old traditions and legends. And resisting the lure of money as represented by a villain said to be studying natural medicines but really after gold. Good themes for sure, but they're muddled in this version. It's a Peru/Dutch/German co-production and you'll see influences from many other animated adventures. 3 out of 5

BODIES, BODIES, BODIES: I got a hint of I Know What You Did Last Summer off this one, not by the plot but the ambience. And the sinister but light tone. It's like a drawing room mystery but with strong contemporary overtones. Pete Davidson plays a guy who holds a hurricane viewing party at his father's country mansion. He invites an ex-girlfriend (Amandla Stenberg) who brings her new girlfriend (Maria Bakalova). There's also a podcaster (Rachel Sennott) and her new boyfriend, an Afghanistan vet (Lee Pace). As the wind and rain pick up they play a game with the same name as the film. It's based on one played in improv classes, involves touching someone in the dark, i.e. killing them, and then having everybody trying to find the killer. A bit like Clue, I guess.

Well, things get complicated. There are old resentments between some characters. One is an annoying bossy type. One is timid and disppears in dark parts of the house. Worse: when one is found dead, the evening is going the way the game tends to go. Instead of the group unifying to survive the weather and a powerfailure and to figure out who killed the dead guy they argue and insult each other. "Nobody likes you," is a zinger thrown out at one point. And there's a twist ending that some will claim they saw coming but don't believe them. It's too gimmicky to be convincing. What the film does have is a keen understanding of how young women turn on each other to argue. Thank Sarah DeLappe's screenplay for that and Halina Reijn for her direction. (In theaters) 3 out of 5