Idris Elba as a genie; Javier Bardem as a Good Boss (?) and Sly Stallone as a former super hero 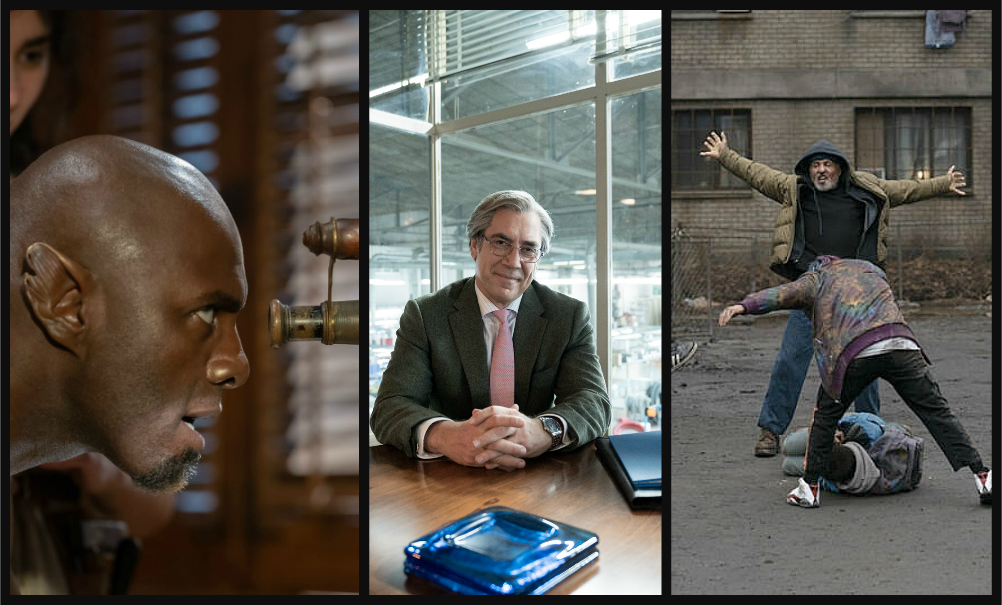 There are a lot of new titles out there this week, in theaters or streaming. For a variety of reasons, one of them medical, I was only able to catch a few but at least one of those I highly recommend.

Others you might be interested in include The Assistant, about a Harvey Weinstein-like situation and Killing Escobar, about a Scot who was hired to off the South American drug lord. Both start on Paramount+ on Tuesday. People in Toronto could check out the Revue Theatre for When Flowers Are Not Silent a prize-winning documentary about a revolution by women that overthrew a dictator in Belarus. The war in Ukraine made us all much more conscious of that country and neighboring Poland, where the film is from and was given a top award.

And in some other theaters there's Alienoid a science fiction film from Korea that's set both in the 14th century and now. In it aliens lock up their prisoners in human bodies. A few escape and have to be hunted down. I started this one but found it hard to stay involved what with erratic story telling about shapeshifting, time travel and a "divine blade."

With these other three, I had no trouble.

THREE THOUSAND YEARS OF LONGING: Last week Idris Elba was fighting an angry lion. This week he's a genie who has been trapped in a bottle and has stories to tell. He won't be the new James Bond; he took himself out of consideration a few days ago but linking up with director George Miller is exciting too. Not Mad Max stuff but a sampling of Arabian folk tales, English bards and myths like Gilgamesh and Cybele. Remember Miller also made the magical Babe and Happy Feet and this time he draws on a novella by English writer and fantasy enthusiast A. S. Byatt. The film, which got a 6-minute standing ovation at Cannes, is totally engrossing though exactly what it is trying to say is illusive. Mostly it is about story telling which human beings have been doing forever as a way to “explain the unknown.”

Idris appears giant-sized after a story-studying academic (Tilda Swinton) releases him from a bottle she bought in a bazaar in Istanbul. He reduces himself to a more complimentary size and starts telling her about everything he's seen. Solomon and Sheba, for instance. He tells what really happened. Then 1,500 years later there's a sultan with a harem of obese women. And later a woman who wants to posses all knowledge worth knowing. The film is crowded with stories. He tells them all to Tilda in hopes of getting his freedom, for which he offers three wishes. She's wary because in stories she has studied such things don't turn out as promised. Surprisingly, their debate on that turns into a love story. That's way too unexpected and somewhat undercuts the fascinating scenes he conjures up and that the film shows with fairly good art direction. Even then, Idris, needy, and Tilda, skeptical, make a good pair. (In theaters) 3 out of 5

THE GOOD BOSS: Add another to the growing list of films that clobber businessmen and their companies. This one is from Spain, won big and was most-nominated at the Goya Awards there and plays as a sly and blistering attack on hypocrisy. Javier Bardem enacts it perfectly as the CEO of a company that manufactures weigh scales for which he evokes Libra to describe as symbols of equality. The film starts with his words to that effect to the employees urging them to work hard because a committee is coming to see if the company deserves a major award. He calls the workers his family but his smiling patronizing manner is soon exposed. .

He has to lay off some workers. A particularly noisy one has set up camp just outside the gates with two young children and a megaphone. He gives a job to an immigrant punk for a not-very-good reason. A long-time friend who works for him (Manolo Solo) is making mistakes, has marital problems and needs his attention. Worse, he threatens his own marriage with a recurring eye for a slinky new intern he's just hired. She's played by the appropriately-named Almudena Amor.

This is a satire but it offers less comedy than you'd expect and compensates with cynicism . Still, there's a lot to enjoy. The script is lean and subtly ironic. Writer-director Fernando León de Aranoa attacks in more directions than he should but he's persuasive. And Bardem convinces as a man who needs the scales working perfectly, except when he needs to “trick” them a bit. (In theaters in Toronto, Ottawa and Vancouver now, Montreal next week) 4 out of 5

SAMARITAN: Tired of super-hero movies? Somebody was, judging by this. It is one, and isn't one. How's that? Look at it with the eyes of 13-year-old Sam (Javon Walton). He's idolized a hero named Samaritan for some time although how we don't know. The guy died 20 years ago in a battle with his enemy, appropriately named Nemesis. Sam suspects he's still alive. At least he wishes so because Granite City is infested with crime and gangs and homelessness. Even he and his mother are being evicted for non-payment of rent. The film suggests that such a gritty urban drama needs a super-hero and connects the two genres into one film. It doesn't make a lot of sense but there's some charm there and a lot of action.

Sylvester Stallone is the guy Sam suspects is Samaritan. Living incognito and working as a garbage man doesn't seem right for a retired super-hero and he, of course denies he is that until he has to save Sam from a bunch of punks. He throws them through the air, tips a car with one hand and attacts the news media when a cell phone video gets on line. Meanwhile there are two gangs. A young one, just sent flying, and an older one headed by Cyrus who is described as a psychopath. He is an accolyte of Nemesis, wouldn't you know, and has a big plan. He'll shut down all electricity one night so that chaos and looting can take place. That's super-hero-movie level malevalence. Director Julius Avery is following the playbook. You'll see touches of many films here and something of a return for Stallone, grunting and punching intact, even though he's now in his 70s.

But take note of Cyrus, played by Pilou Asbæk, who many may remember from Game of Thrones. He's a great villain here, driven and dangerously unstable. This film is popcorn stuff, speedy, preposterous, short of thoughtful but entertaining. (Streaming on Prime Video) 2 ½ out of 5