MOVIES: Finding great fantasy prior to Lord of the Rings, also exposing a preacher and gunning for a drug lord 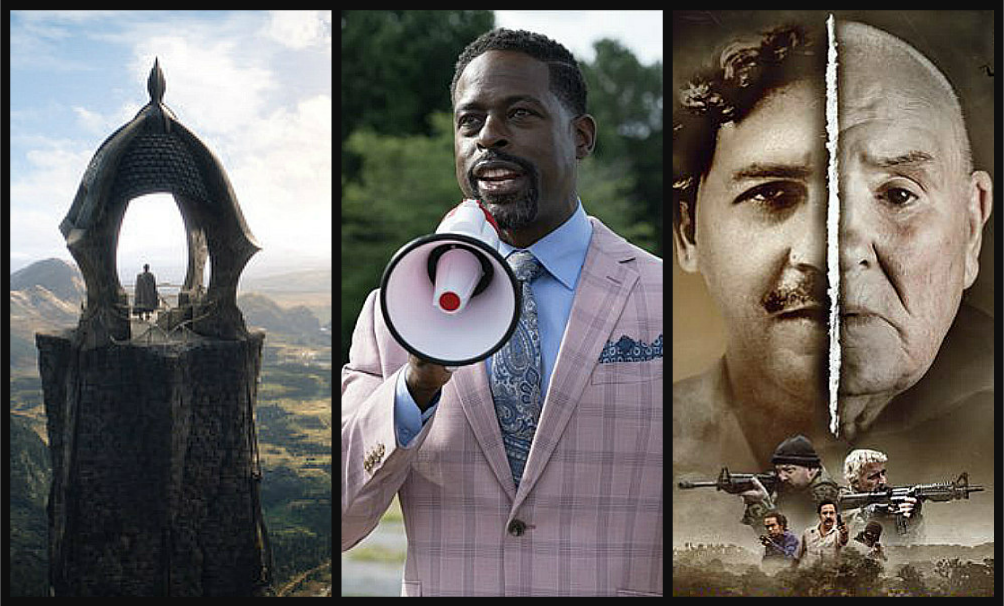 And: a very realistic picture of drug addiction in a family
Previous story

Movies are cheap tomorrow, Saturday, just $3. Yes in actual theaters and even the extra-cost ones like IMAX and AVX. It's a promotion the industry is running for a third year that they call National Film Day. So, if you want to see Jaws which has been rereleased, or Top Gun Maverick, the hit of the summer, or anything else, check it out. You can find what theaters near you are participating, and there are many, go to this site https://www.tribute.ca/ and find a click-here button to take you there.

For other choices, read on here ...

The Lord of the Rings: The Rings of Power: 4 stars

Honk for Jesus Save Your Soul: 3

THE LORD OF THE RINGS: THE RINGS OF POWER: You might think that this series spun off from that great work of fantasy and which admits it contains characters, dialogue and situations that are “inspired by though not contained in the original” might be contrived and artificial. Wrong. This series spins magic. The story is engrossing; the writing and acting are first-rate and literate and the art diretion is superb. Most amazing is how clear and detailed the visuals are showing us villages, castles built into mountainsides, taverns, farmhouses with fairy-tale ambience you can't help throwing yourself into with comfortable abandon.

The story is made up of bits found in the appendices to the original books and filled out with new material written since then. It takes us back many years before Lord of the Rings. Evil fostered by Melkor was defeated and the king declared “our days of war are over.” With peace assured, he doesn't need an army. Chapter one is largely taken up with a prolonged debate on that. Galadriel (Morfydd Clark) argues evil is re-grouping under a new leader, Sauron. “Evil does not sleep,” she insists. “It waits.”

She's told this: “Whatever happened here is long ago.” One of the main naysayers, Elrond (Robert Aramayo) is hooked up with the man who will eventually create the rings of the title. The soldier Arondir (Ismael Cruz Cordov) can't have a drink in the tavern without a challanger disputing his keep-fighting stance. The chapter has a lot of characters to introduce and that weighs it down at times. But with the quality of the production, a sense of dread building and a livelier second episode, the prospects are very good. (It's an Amazon production streaming on Prime Video) 4 out of 5

HONK FOR JESUS. SAVE YOUR SOUL: It's always fun to savor a movie that attacks hypocrisy. Last week it was a businessman; this week self-made purveyors of religion. Sterling K. Brown is ever smiling and confident as the head of a mega church in the US south. He claims “tenacity” as his strength and says he “invested in God” and look what he got back. A huge house, a closet full of expensive clothes and shoes. He'll wear Prada for his Easter Sunday sermon. “Showtime!” he declares.

His wife, played by Regina Hall, is right beside him though why is a bit of a mystery. He's been accused of multiple sexual offenses with parishioners, had to shut down his church for a time and is about to make a comeback. Step one: let a filmcrew watch everything they do for a documentary. Both address the camera directly, he extolling their virtues, and she asking the camera be shut off when they happen to mention things they don't want remembered. As he says: “I am new.” But he's terrified. Another couple is also working on opening a mega-church and may take away the few congregants hehas left. His next sermon will be on “holy restraint.” The film by Adamma Ebo says the obvious, but very well. (In theaters) 3 out of 5

KILLING ESCOBAR: The movies' favorite drug lord, Pablo Escobar, gets another film treatment, and why not. The Colombian criminal supplied the US with much of its cocaine, had a 10,000-acre ranch complete with a museum, a zoo, a private airstrip and a notable momento: one of Al Capone's cars. He's only In this film via photos and a few clips but you feel his presence because this documentary plays like a thriller.

A rival gang, in Cali, wanted him out, found an ex-soldier who knew somebody who could round up some mates and work to assassinate the guy.

Peter McAleese, a mercenary from Scotland took the job, narrates the film (years later) and shows how he organized the attempt. He gives us great detail about that, and some video footage too, how they got into Columbia undetected, how they trained and became a team, how they scouted the Escobar compound like in a military operation and how they had to fight off his guards. McAleese went down in a helicopter accident and spent days in pain lying in the woods thinking over how his life had turned out like this. Growing up in tough Glasgow is part of it; a violent dad is another. He gets amazingly philosophical lying there and we get a terrific film, enhanced by reconstructed scenes and an ending you may not expect. (Started streaming this week on Paramount+) 4 out of 5

OUR AMERICAN FAMILY: This is one of the best films I've seen about addiction. It fits with stories I've heard for years about families struggling with it, feeling unable to deal with it, even shattering because of it. Not all of that happens here but it gets close. And we get close, as this family in Philadelphia lets the cameras watch everything. They're sometimes at the dinner table just talking, then disagreeing, then snapping at each other and then arguing loudly. It's highly dramatic, and revealling.

The oldest daughter is the main focus. She's been in rehab 17 times and almost died of an overdose. She says her addiction completely takes her over with “a creepy, foggy feeling” that overwhelms her. She's robbed, stolen, sold her ass (her words) to pay for it. The only solution is to get high again. And she's not alone. Her brother has his own addiction issues, her mother is a recovering addict, her dad, also an addict, has left the family, and a stepfather is trying to keep order. Mom had a mother who suffered an eating disorder which seemed like a form of addiction too. The film shows how it can travel through an entire family. The daughter has a two-year old child and worries whether it'll get to her too. Directors Hallee Adelman and Sean King O'Grady reveal it all without the usual hysterics but a lot of intimate connection. It's worth the effort to find it. (Apple TV/iTunes and Google Play starting Tuesday) 3 ½ out of 5