MOVIES: Animated from Disney and Pixar and serious and significant from two festivals 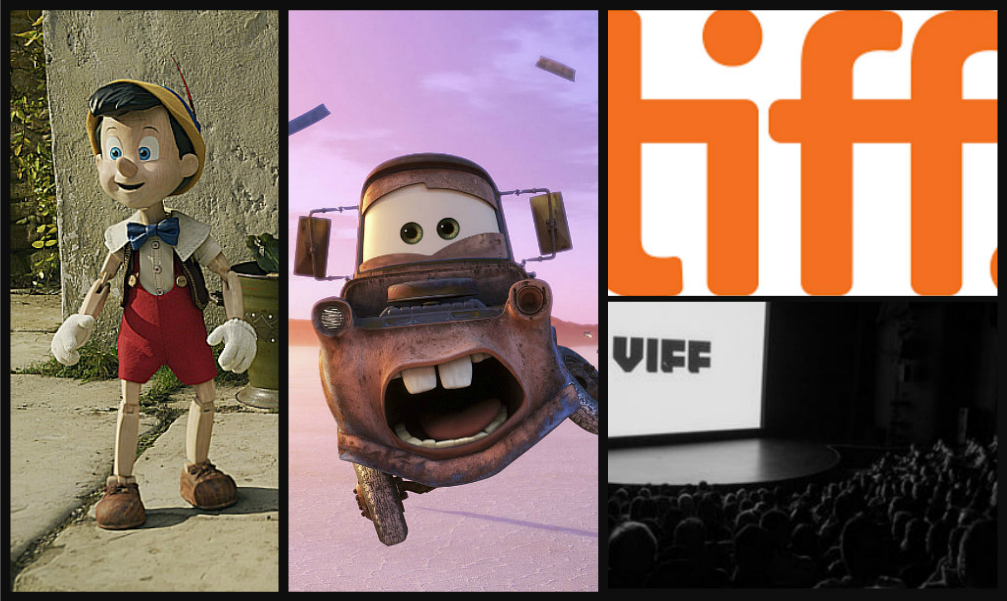 It's film festival time again. Toronto's has started. Vancouver's has revealed its plans and you can read about them here. Meanwhile, Pinocchio is back, Cars are streaking again and two off-beat films get pulled behind.

FESTIVALS: For weeks we've been getting news about what and who are coming to the Toronto International Film Festival. Spielberg to Oprah. Special recognition to Brendan Fraser, Michelle Yeoh, Buffy Sainte-Marie and others. Celebrities and big titles. Now that TIFF is underway, we'll see many reviews.

Meanwhile, the Vancouver International Film Festival announced its line up this week. The fest starts in three weeks and like Toronto will show about 130 features, mostly in theaters, maybe 24 available by streaming. Indigenous filmmakers will be a major focus, and the opening film is Bones of Crows is a prime example. It's by Marie Clements and tells of a woman who survives residential school and serves in World War two using her Indigenous language in coded messages.

The closing film is Broker by the South Korean auteur Hirokazu Kore-eda and stars Song Kang-ho who you'll remember from Parasite. In between you'll find new works by Sarah Polley, the Dardenne Brothers, Ruben Östlund, Martin McDonagh, who made the fabulous In Bruges, Olivia Colman in Sam Mendes' Empire of Light and Kat Jayme with her second film about the long-gone Vancouver Grizzlies basketball team.

There are films about climate change and the environment including a look at the Extinction Rebellion crowd, an abandoned mining site and Australia's forest wildfires.

I'll be watching for Back Home the story of a woman trying to figure out why her brother committed suicide 20 years earlier. It's a B.C. film, a world premiere and I'm interested because my grandson is in it.

Riceboy Sleeps, which is getting a world premiere in Toronto and also playing both festivals tells of a young Korean mother raising her son in Vancouver with national pride while he just wants to avoid bullies by assimilating.

And here's a potential highlight: Nosferatu. The German horror classic is a 100 years old and not only a first Dracula film but a reputed aftereffect of the pandemic of 1918. It's being shown Oct 4 with live music in an appropriate sertting the gothic architecture of St Andrew’s Wesley United Church.

Most notable among the films at both festivals may be The Whale starring Brendan Fraser. The BBC says he deserves an Academy Award for his performance.

VIFF is only 11 days this year, Sept 29 to Oct 9, but as executive director Kyle Fostner said at the press conference, is trying to recover and grow at the same time. Same as TIFF.

PINOCCHIO: Dis ney has also been remaking its classic animated films into live-action versions and as good as this one is, I don't see the need for it. That's even though it stars Tom Hanks as Geppetto the lonely carpenter and is made by a top director, Robert Zemeckis. He made Back to the Future and many others and directed Hanks in The Polar Express. His energy is there in this film, but be careful. Some of this could traumatize the young kids. The old animated version was dark to some minds but not as scary as the scenes with the sea monster here, or Pinocchio in a cage or Geppetto lying lifeless on the beach. The story is the same; the treatment is modern and much more intense. Pleasure Island is particularly flashy and ominous.

Benjamin Evan Ainsworth voices Pinocchio. Cynthia Erivo is the Blue Fairy who brings him to life, Joseph Gordon-Levitt is a creepy Jiminy Cricket and Lorraine Bracco is Sofia the Seagull, a new character. Almost stealing the show though is Keegan-Michael Key as a very bombastic "Honest" John. The songs from the original film are sung alongwith two new ones and the story is intact except for one major thing. Pinocchio's wish to become a real boy is not as clear and the end is ambiguous. That's a modern touch. (Disney+) 3 out of 5

CARS ON THE ROAD: The Cars films from Disney and Pixar ended with number three. That was five years ago and since they've remained steady family favorites we get to drive with them again. Well, two of them: Lightning McQueen (voiced by Owen Wilson) and that rusty tow-truck Mater (Larry the Cable Guy). They set out of a cross-country road trip because Mater wants to attend his sister's wedding. Other characters have a surprised question: “Mater's got a sister?” Yes he does and there are surprises coming as we find out a lot about his background. To get there we see nine brief episodes, about 10 minutes each, one as short as six, each about a specific leg of the road trip.

There's a mechanical dinosaur theme park, a circus, the salt flats where Mater wants to speed up like a race car, a truck stop where he mingles with the big boys and longs to be like them (even sings a song with them). There are movie references. One sequence recalls The Shining; another does The Road Warrior and prompts Lightning to point out the futility of the “post-apocalyptic turf war” carried on by two factions who “sought enlightenment in the desert and now can't remember what you're fighting about.” Witty nuggets like that are scattered throughout. One sequence has both invited to appear in a film shoot run by a “legendary horror director.” B-movie pretensions get exposed. The whole series is fun through a bit frustrating to get it in short bits instead of one continuous movie. (Disney+) 3 ½ out of 5

MEDIEVAL: You get a robust history lesson in this film from the Czech Republic but you'll probably have a hard time understanding it completely. It doesn't explain itself properly for those of us who aren't familiar with the story of Jan Zizka, the 15th century warlord. He may be an icon over there, known to have never lost a battle, but the story this film tells is dense, almost opache. There are times you don't know who is on whose side in a battle of succession.

In the Holy Roman Empire. There was chaos after Charles IV died and two brothers fought for the throne representing two factions that were allied with the two popes who were reigning at the time.

A powerful baron, Lord Rosenberg (Til Schweiger) is taking advantage of the uncertainty. Another Lord played by Michael Caine, wants to stop him and hires the mercenary Jan Žižka, played by Ben Foster, to do that. The plan: kidnap his fiance, Lady Katherine played by Sophie Lowe, and force him to stand down. Jan and Katherine also share their thoughts on life and fall in love. That's somewhat doubtful. I suppose all that happened. It's just It's hard to follow as written and directed by Petr Jákl a former judo champion and stuntman. He made two high grossing genre movies and displays his real talent here with many battle scenes and gory violence. It's the most expensive Czech film ever made. But not the epic it wants to be. (In 10 theaters, Toronto to Victoria) 2 ½ out of 5

BARBARIAN: This could be the most disappointing horror movie of the year. I haven't seen them all so that's why I'm hedging. The problem is this: the film starts out so well, slowly building mystery and dread as a young woman (Georgina Campbell) arrives on a rainy night to an air b&b house she has rented and finds a young man (Bill Skarsgård) already in there saying he has rented it. He lets her stay the night during which she hears noises, sees doors opening and in true horror-movie style goes down into the basement to explore. She finds more doors and an underground tunnel to more rooms. Good chilling stuff, but the film by Zach Cregger eventually goes crazy, gross and even stupid.

First, the story switches from, Detroit, to Los Angeles where an actor (Justin Long) is being accused of sexual improprieties and needs money to pay for a lawyer. Turns out he owns the house in Detroit, goes there to prepare to sell it and gets drawn into whatever is going on inside. The first guy, the renter, isn't around anymore but an old man and a witch-like old woman are, down in the tunnels and secret rooms. There are still scary scenes to behold but the film turns things up and gets ultra-creepy, gross and ludicrous. Well-crafted but a serious let-down. I don't even know what the title has to do with it. (In theaters) 2 out of 5