MOVIES with women warriors in Africa, silent teens in Wales and the prequel to a Texas horror 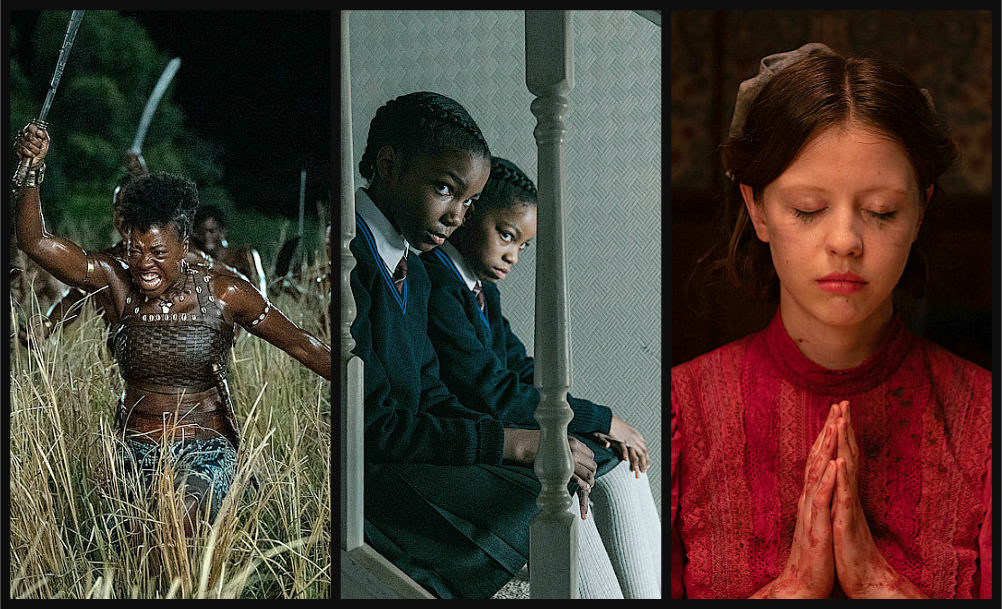 The movie theater business is in a bit a doldrums right now. Happens every year at the end of summer and it's tougher this year. COVID is still around and the big films are slow to arrive. That's what I read everwhere but this week's films don't support the gloom. Look at the good marks I've given to these ...

If you're not going out, check out the Lord of the Rings series on Prime Video. It's going very well. Three episodes are available already, a 4th will be later today (Friday) and though the story is not all that clear, individual sequences are thrilling and the special effects and all the visuals are top-notch. They really belong on the big screen.

And now back to our regular program:

THE WOMAN KING: There are several ways to approach this, all worthwhile. As an action flick, for one. It's got a lot of that though you might find that a few too many sonorous speeches slow things down. Better: a history lesson about Africa. We don't get many in the movies about the people who lived there. Usually we get the colonisers' stories. Here we learn about Dahomey, which is now known as Benin. In the 1820s it was powerful, defended by a fierce army of women warriors, fighting wars with its neighbors and fending off slave traders. On that point it had an ambiguous stance: it was only willing to sell enemies it captured to the traders. The morality of even that trade is a major theme. There are others: resisting arranged marriages, male entitlement and low status of women. Modern ideas. But the story co-written by Maria Bello and directed by Gina Prince-Bythewood finds them debated back then.

And the power of women is amply shown. The warriors, known as Agojie, with their imposing leader (Viola Davis), train and battle, armed only with blades against rifles. A new recruit (played by Thuso Mbedu) becomes key in a number of ways. She refused an arranged marriage, suggests alternatives to the slave trade and even talks back to her leader. There's more to that, we later learn. Meanwhile she also has a near-love interest in a young slaver (Jordan Bolger) who happens to be half-Dahomey, half Portuguese. That may be in there to play to movie goers but feels out of place. There's enough else in this movie to keep you involved. (In theaters) 4 out of 5

THE SILENT TWINS: They're young teens and feel so alienated from society that they stop talking to anyone except each other. In that relationshop they create a rich fantasy world of fictional characters, strange stories and writings that they hope to interest a publisher in. Their parents can't communicate with them. The school doesn't know what to do with them and sends them to a special school for difficult adoslescents. They get more out of a correspondence course in creative writing. When they get a typewriter they're beaming. “We are writers now,” one says. They're twins and look exactly alike. But eventually they'll compete trying to get a book published.

The story is true. June and Jennifer Gibbons came with their parents from Barbados to Wales in the 1970s. There's been a TV series, a play and a memoir and a London Times reporter wrote about them, consulted on the film and is represented by a character in it. The girls are ably and endearingly played by Letitia Wright and Tamara Lawrance, both of whom have some movie acting experience. They speak little bits of wisdom now and then (“You'll never find joy if you want to be alone.”) Here's another: “I'm immune from sanity or insanity.” Those and more are harvested from notes the girls scribbled or writings they completed. Why they were so isn't clear. Racism is mentioned but not difinitively. What we do have here is not the whole answer but a fascinating story directed by Poland's Agnieszka Smoczyńska. (In theaters) 3 out of 5

PEARL: You don't have to have seen the film that this is a prequel to. For one thing, that film, X, is set many years in the future and you don't have to know what Pearl eventually became. You can watch this as a completely stand-alone movie and emphasize deeply with a young woman's thwarted dreams. Mia Goth, as Pearl, lives on a farm with a disabled father, she has to feed and clean him in his wheelchair, and a mother (Tandi Wright) who is constantly berating her. It's hard for German farmers to be accepted in Texas, she goes on, what with World War I having just ended. It's 1918, the flue pandemic is on and characters are often wearing masks.

Mom's biggest gripe is about Pearl's wish to become a dancer like she sees in the movies. It's a childish fantasy, she yells, but it's also an escape. It leads Pearl to get to know the projectionist (David Corenswet) at the local theater. He's always willing to see her, beds her and shows her a porn film. She'd better get out of this too and a friend (Emma Jenkins-Purro) has a way. A church plans to put on a fund-raising show and needs young women dancers. Exactly what Pearl is looking for. The two go off to the audition and … well … expect surprises and an ambiguous ending. It's not like the horror film that will follow. It's a carefully-building atmosphere of dread, haunting tension and one young woman's slipping hold on reality. It's a very good film. (In theaters) 3 ½ out of 5

MOONAGE DAYDREAM: There's your usual documentary about a musician. Talking heads, friends, fans, critics and some words from the artist himself. An overview of a career. Not so with Brett Morgen's look at Davie Bowie. It's as mercurial as he was, impressionistic and kaleidiscopic. You get a vision of the man, and his thoughts, but facts? Not so much. You do get lots of music though; many of his best known songs crisply remixed for this film by music producer Tony Viconti. It's sure to be thrilling on the big screen, including IMAX for which the music was optimized.

As for a portrait of the artist, it comes from him alone, from old clips and interviews, notably with one by Dick Cavett. Bowie's not particularly forthcoming though he does talk about taking chances now and then to bring new influences into his music. And this insight into life: don't waste a day. In one clip he talks about being a Buddhist on Tuesday and into Nietzsche by Friday. We don't actually get much new about his artistic methods. But there is the music. He must have videotaped almost every concert he did because we get a hefty sampling, occasionally full songs, from giant venues. Morgen has does a great job of editing, moving smoothly between these formats, adding in home movies the Bowie estate provided and most flashily cutting in movie clips. A few are from his own films, most are classics, The Cabinet of Dr. Caligari, Metropolis, 2001, Blade Runner and many others. That may sound chaotic but does reflect the frequent changes his art took. This film is a joyous appreciation that the fans, in particular, are bound to like. (In theaters) 4 out of 5