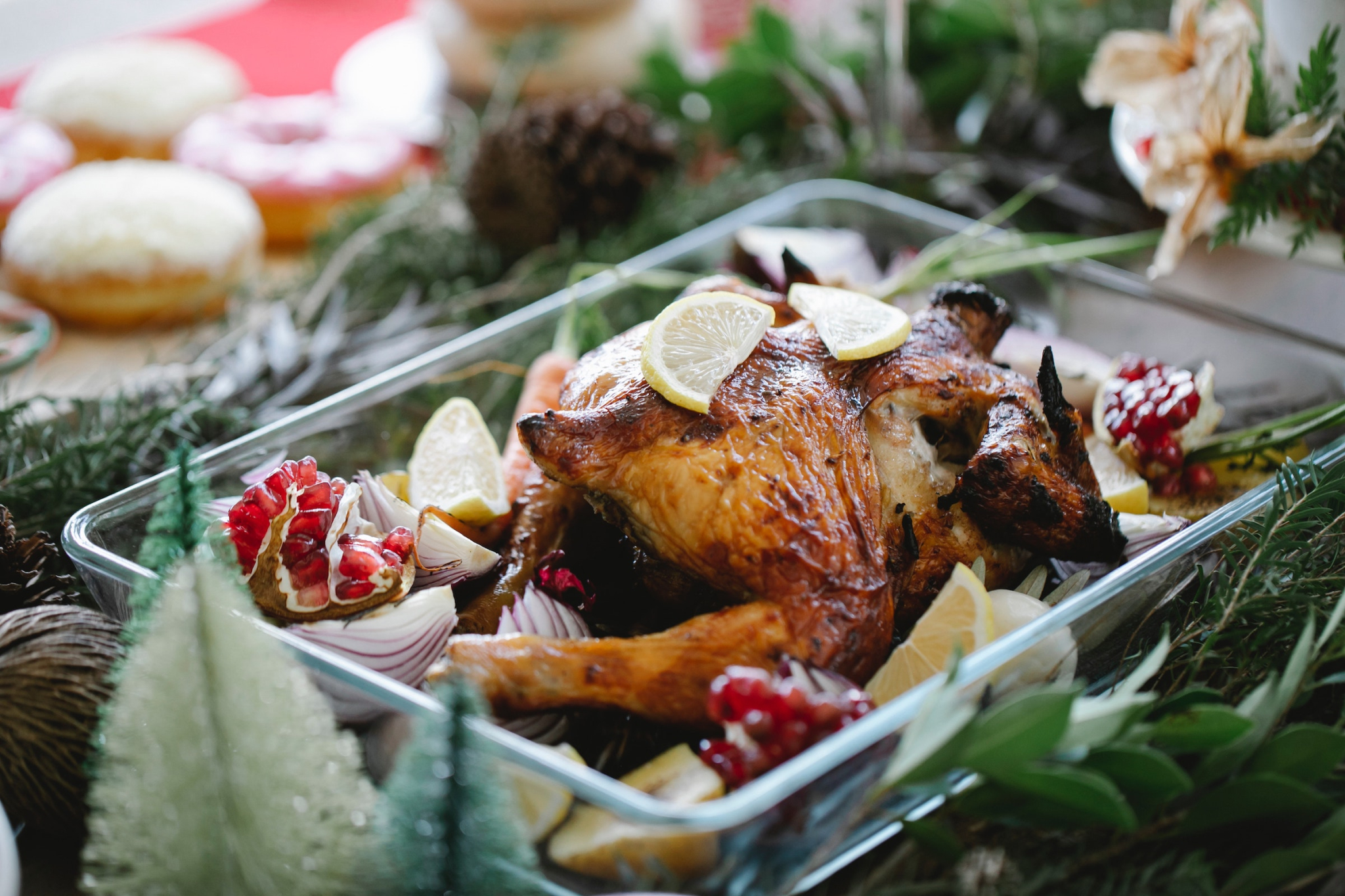 Common holiday meals like roast turkey, ham and pork pie have "much higher" impacts on the climate and biodiversity than Canadians' average diet, one researcher has found. Photo by Tim Douglas / Unsplash
Previous story

Meat will not be on the menu at Thomas Elliot's 2022 Christmas dinner. For the sake of the climate and biodiversity, the environmental scientist and post-doctoral fellow at the École de Technologie Supérieure de l'Université du Québec in Montreal has opted for a vegan feast. So far, he has bought a squash he plans to roast and might make a vegan Wellington on the side.

He's calling on others to do the same: "It's Christmastime. People like richer foods, and those foods tend to take more from the environment."

In Canada, common holiday meals like roast turkey, ham and pork pie have "much higher" impacts on the climate and biodiversity than Canadians' average omnivorous diet, Elliot found. Vegan alternatives, vegetable pies or plant-based products have between three and four times less impact on the environment.

In contrast, vegan alternatives like vegetable pie, vegan cake or vegan Wellington use less than two square metres of land and generate roughly two kilograms of CO2 equivalent per kilogram of food to produce.

Elliot and a team of researchers from the École de Technologie Supérieure and McGill University used a model that integrated all aspects of food production into its assessment. It included the energy and land required for everything from producing fertilizers to disposing of food waste and scraps after a meal.

To keep the planet below 1.5 C of heating — essential to mitigate the worst of climate change — everyone on the planet will, on average, need to limit their emissions to less than 2.9 tonnes of CO2 equivalent. Canadians last year emitted far more than that, generating on average 14.3 tonnes of CO2 equivalent per person. Food accounts for roughly a third of those emissions, Elliot's research noted.

Environmental scientist Thomas Elliot is calling on Canadians to cut back on the Christmas pork and turkey for the sake of the climate.

Cutting back on meat and dairy is a relatively easy way for individuals to curb their emissions. Unlike structural sources of greenhouse gases like electricity or transportation, eating less meat is an easy way for people to drastically reduce how many greenhouse gases they want to emit, he explained.

But why target the festive cheer with warnings of pork-prompted climate collapse?

"This kind of work is supposed to highlight (the question) of: How much of an impact do I want to have on the planet?" he explained. "More and more people are starting to be motivated by what's good for the environment, as long as it is delicious."

Make your Christmas sweater less ugly for the environment

Again....a 'relatively easy way to mitigate your footprint'....is the last thing we need to rely on. Stop flying and you've saved more greenhouse gases in a few hours than trying to learn new ways to cook after doing that 10 hour shift at the hospital.
In short....tell someone other than the chief cooks and bottle washers how to step up......because most women are so overloaded now that expecting them to change diets is asking a lot. What may be worse about this vegan solution, is that the article doesn't distinguish between agri business and traditional farming....or acknowledge that many of our original prairie ecologies have to be restored......not further eroded with monoculture agriculture.

Growing those peas that get transformed in labs to phony meat is hard on the soil....the use of petro generated fertilizers, instead of animal manure, is a soil killer over time as well.

We have to stop looking for silver bullet, easy solutions and consider how to retool the entire way we do our food production, home building, travel and entertainment. Meat production has to change drastically, for sure.....and it can't be grain fed for the most part.

But imagining that herbivores have to be extincted......or reduced to living in zoos, is a more drastic one stop solution than it appears to be. Once we've stopped extracting oil, gas, bitumen...once we've stopped clear cutting forests....once we've restricted airplane travel to what's essential....perhaps we could consider returning the Canadians great plains to the buffalo.

I've read recent research that claims the native bison take less water, are more beneficial to the earth....and more nutritious in the tummy. Perhaps we should stop tinkering........and restore the earth. LAND BACK.

“ ‘A vegan diet is probably the single biggest way to reduce your impact on planet Earth, not just greenhouse gases, but global acidification, eutrophication, land use and water use,’ said Joseph Poore, at the University of Oxford, UK, who led the research. ‘It is far bigger than cutting down on your flights or buying an electric car,’ he said, as these only cut greenhouse gas emissions.”
https://www.theguardian.com/environment/2018/may/31/avoiding-meat-and-da...

“Most studies conclude that if you look at the amount of land used and greenhouse gas emissions produced per kilogram of meat, pasture-based cattle actually have a greater climate impact than animals fed grains and soy. This is because commercial feeds tend to be less fibrous than grass, and so cows that eat them produce less methane (through belching and flatulence), which is a potent greenhouse gas. Animals in more intensive, grain-fed systems systems also reach slaughter weight faster than grass-fed animals do, so emissions over the animal’s entire lifetime are lower. ... [G]razing livestock – even in a best-case scenario – are net contributors to the climate problem, as are all livestock. Good grazing management cannot offset its own emissions, let alone those arising from other systems of animal production.”
https://theconversation.com/why-eating-grass-fed-beef-isnt-going-to-help...

“If I source my beef or lamb from low-impact producers, could they have a lower footprint than plant-based alternatives? The evidence suggests, no: plant-based foods emit fewer greenhouse gases than meat and dairy, regardless of how they are produced. … The pea producers with the highest footprint emit just 0.8 kgCO2eq per 100 grams of protein. For nuts it is 2.4 and for tofu, 3.5 kgCO2eq. All are several times less than the lowest impact lamb (12 kgCO2eq) and beef (9 kgCO2eq). Emissions are also lower than those from the best cheese and pork (4.5 kgCO2eq); and slightly lower or comparable to those from the lowest-footprint chicken (2.4 kgCO2eq). If you want a lower-carbon diet, eating less meat is nearly always better than eating the most sustainable meat.”
https://ourworldindata.org/less-meat-or-sustainable-meat

First this:
"... vegan alternatives ... use less than two square metres of land and generate roughly two kilograms of CO2 equivalent per kilogram of food to produce."
That's (2 sq.m. and 2 kg CO2 per kilo) of vegan food ...

I hate those mixed units comparisons, because almost always, as here, actually arriving at a comparison relies on a value that is not provided, rendering opaque any meaningful comparison.

"In contrast, a vegan diet that eschews meat and dairy uses roughly half as many resources to produce a kilogram of food."

Half as many resources? 2 sq.m. is 1/8 the land per kilo of food, and the CO2 component would seem to imply 4 kg of vegan food per day. Assuming it's not all veg, and there are some grains and pulses in there, it's still over a gallon of food a day. I've known quite a few vegans, and I doubt any of them consumed that volume of food.