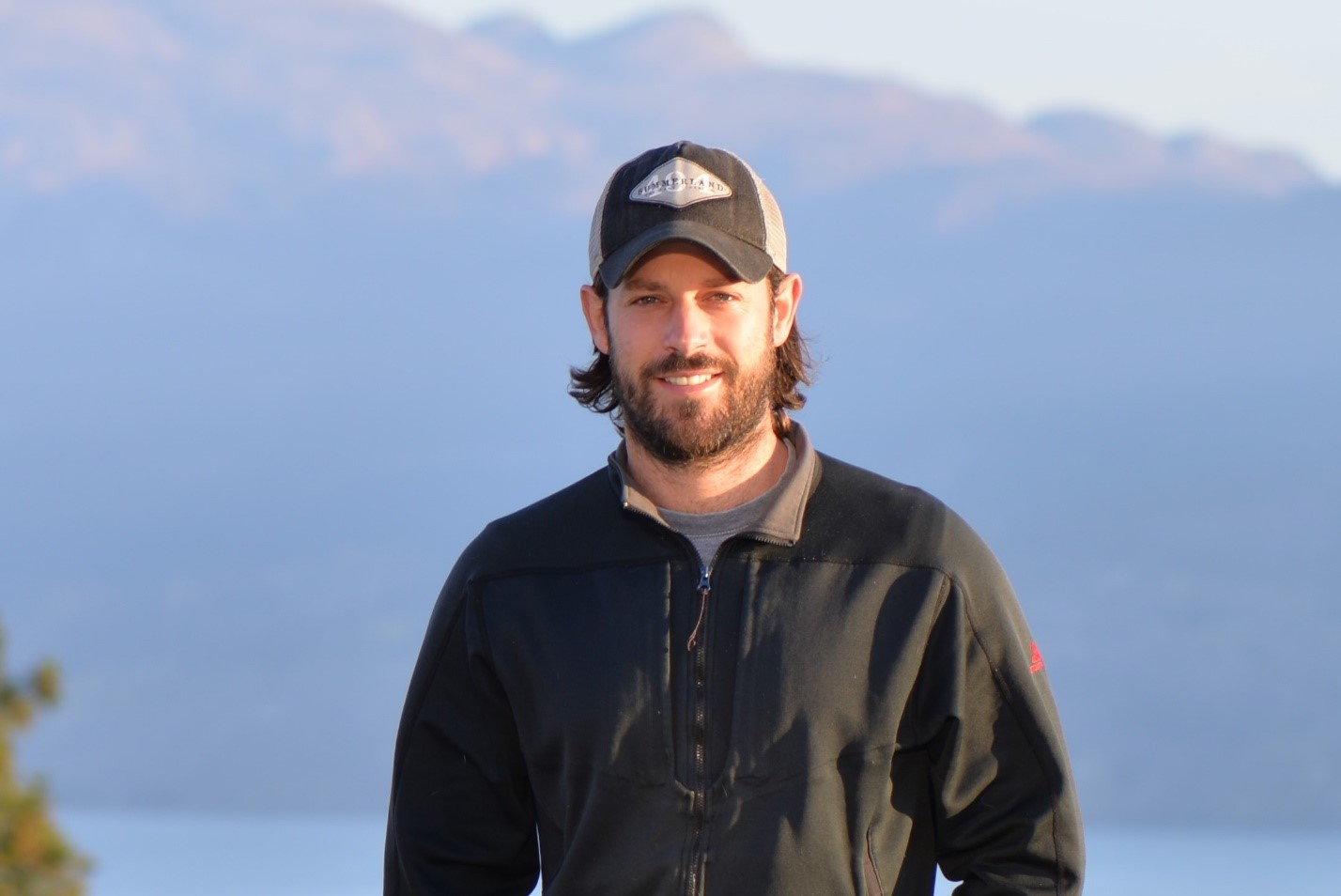 Adrian Arts’ apple trees were dying. They suddenly started to look sick in late spring, their oval leaves turning brown and falling to the ground. Only a month earlier, the human-sized trees seemed healthy, and the orchards were painted with pink and white blossoms. But despite Arts’ best efforts — extra watering and tender care — nearly half the trees in the Okanagan farmer's orchard died two weeks later, just as they were starting to fruit. He had no idea why.

"It's terrifying. I don't own properties, they're leased. To see a whole orchard (that) looked sick — it was crushing," said Arts. A geologist by training, he took a risk a few years ago and ditched the oil and gas industry to start farming. As Arts’ trees died, his dream of growing fruit for a living felt shattered.

Arts hired soil consultants to determine if the deaths were linked to a new pest or parasite. He looked at the composition of his soil for nutrient deficiencies. Teaming up with researchers at the federal government's agricultural research centre in Summerland, B.C., he went over years of weather data and spraying records. The tests yielded no results.

This mysterious epidemic hit Arts’ orchards in 2019. But the apple plague had been sweeping through parts of North America for nearly a decade. Losses were high — over $17,000 per acre for some American growers in mid-Atlantic states. In Canada, Ontario and the Okanagan seemed to be hardest hit as some apple orchards lost nearly half their trees.

Researchers named the phenomenon Sudden or Rapid Apple Decline (SAD/RAD). Some blamed viruses and parasites. Others pointed to herbicides. A handful even disputed the phenomenon's existence and pointed to erratic weather as the cause. But no one knew what was behind it.

Jesse MacDonald first heard about RAD roughly a year before the trees in Arts' orchard started dying. Born to a family of Okanagan fruit farmers, he had just finished university and returned to the valley for a job at the federal government's Summerland agricultural station.

It wasn't long before he started getting calls from growers — including his parents — reporting "really weird" tree deaths in their orchards. Some growers were losing nearly half their orchards within a few weeks. In every case, the trees were dying quickly right before they reached their peak.

For MacDonald, figuring out the "complex … multidisciplinary" mystery had an irresistible pull.

He found his first clue the moment he entered the first sick orchard. Almost all the dead trees were infected with the fungi cytospora growing at the graft union, where the trunk of the tree meets the roots.

Adrian Arts’ apple trees were dying. But despite Arts’ best efforts — extra watering and tender care — nearly half the trees in the Okanagan farmer's orchard died two weeks later, just as they were starting to fruit. He had no idea why.

Commercial apple trees are typically created by joining two biological components, the scion and the rootstock. The scion is the upper part of the tree that produces fruit. It is joined to a separate root system — the rootstock — with a process called grafting. Grafting fuses the two pieces together into a single unit that can exchange water and nutrients.

Modern orchards typically use so-called "dwarfing" rootstocks, which prioritize producing fruit over growing wood. These rootstocks create delicate, roughly human-sized trees that are easier to harvest, help apples become more colourful by exposing them to the sun and can be grown much more densely — a tactic that reduces labour while maximizing yield. These characteristics have made them nearly ubiquitous in modern, commercial apple orchards trying to turn a profit in a competitive and unpredictable industry.

These trees are delicate, but MacDonald had never heard of cytospora causing them to die en masse. The team had "no idea" what was wrong with the trees and started digging for answers. They looked into an invasive insect that targeted fungus-weakened trees and tested the trees to see if they were infected with a novel virus. They also poked at nematodes, a type of microscopic worm, and the possibility that climate change was behind the die-offs.

Over 4,000 kilometres away, plant pathologist Kari Peters was also grappling with the RAD mystery. The University of Pennsylvania professor started studying the phenomenon in 2013 after apple trees in her research orchard suddenly perished. The same story played out with apple growers across the eastern U.S. In every case, the trees died as they were about to reach their "full potential," she recalled. They all seemed to have issues with their graft union, but the problems were common and typically benign.

After years of research, in 2019, Peters organized an apple industry convention. Perhaps by bringing growers, researchers and government representatives together, it would be easier to see commonalities between the deaths and figure out what was happening.

The convention proved "very contentious." RAD only seemed to hit high-density orchards full of trees with dwarfing rootstocks. The world's most common one — the M9 rootstock — was by far the most frequently hit.

"There's a lot of very strong opinions because there's some individuals who have spent a career touting the importance or benefits of … high-density plantings — and that's where we only see issues," she said. "People don't believe (RAD) is a phenomenon."

Created in England, Peters described the M9 as appealing to growers because it is short, highly productive and has relatively leafless limbs. Fewer leaves expose the fruit to more sunlight, which gives them more colour and makes them more appealing to grocery stores and consumers.

These traits have made the M9 a "problem child," ubiquitous in orchards worldwide, Peters said. Unlike larger trees, the rootstock requires intensive irrigation and nutrients while producing a tree so spindly, it needs a trellis to grow. But Peters also found it has an "inadvertent flaw”: many of the dead trees harboured a previously unknown virus. She thinks this virus is weakening them just enough to make them vulnerable to other problems, like drought or extreme cold.

Back in B.C., MacDonald and his team were making progress. Like Peters, they'd noticed that RAD seemed to mostly kill trees on dwarfing rootstocks. Bigger, "semi-dwarfing" trees weren't hit as hard. A plant pathologist in the group had also concluded water in the sick trees wasn't flowing smoothly between the roots and the scion, adding to the stress caused by the cytospora fungi.

Neither issue would normally kill a tree. But MacDonald said the "extreme" weather caused by climate change was possibly dealing a fatal blow to already weakened trees. Weeks-long droughts were the biggest problem in the Okanagan, drying out the soil and making trees lose water from their leaves faster than normal.

So far, no one has solved the RAD mystery. MacDonald and Peters both stressed their research is ongoing. However, their findings so far point in similar directions. RAD appears to be caused by the accumulation of smaller issues, like low-lying viruses or extreme weather, instead of a single culprit. The phenomenon is mostly hitting dense orchards planted with M9 dwarfing rootstocks. Trees on sturdier rootstocks are doing better than their more delicate cousins.

With hundreds of thousands of dollars worth of trees on the line, these initial findings have been enough to push growers in Peters' area to start changing their practices. Some have given up on M9 rootstocks altogether, opting for other dwarfing varieties (there are several), she said. In B.C., MacDonald is advising orchardists to improve their irrigation and experimenting with an apple tree "sunscreen" made from calcium carbonate.

But an easy fix is unlikely, Peters warned.

"There are a lot of variables to consider (and) we need to look at the whole system," including how orchards can be made more resilient without leaving growers broke, she said. "It's a very, very delicate situation."

Climate and the holiday storms of 2022: ‘I don’t think people realize just how much trouble we’re in’

Overheated — Canada’s gasoline emissions are surging out of control

This article is interesting

This article is interesting and I think it reflects an aspect of human nature that has been fully and disturbingly on display of late, i.e. an entirely irrational but stubborn REFUSAL to take in new information, particularly when it comes to their personal lives.
Some did the reasonable thing and changed the rootstock they were using, which was where the majority of die-off was happening, but it sounds like many quibbled at this as a conclusion for various reasons, probably because they didn't want to have to change what they were doing, and because it didn't happen with every single tree. It's the way a lot of people are with climate change, and ANY change really.
"No one likes change" is a given, but clearly a certain percentage of us, who are usually of the fretful, conservative persuasion, are a real problem for the rest of us.

Oh, dear, I do love that

Oh, dear, I do love that phrase "fretful conservative persuasion" That is a meme for the ages. "Fretfulness" should be added to the psychiatric "bible". The root cause of so much human dysfunction.