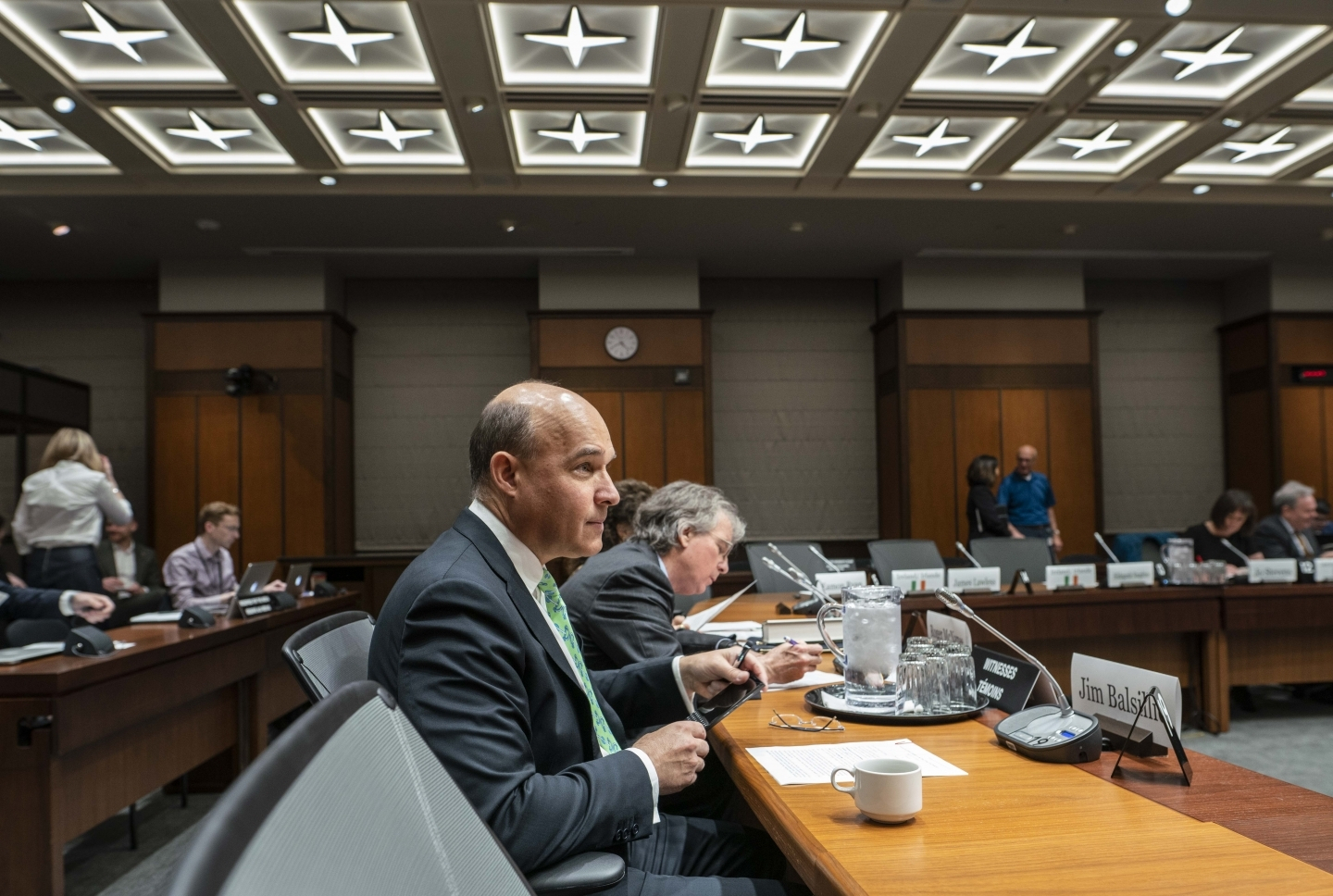 Facebook CEO Mark Zuckerberg should face a legal order to appear before a group of international parliamentarians studying disinformation, according to the journalist whose reporting triggered the Cambridge Analytica scandal.

Carole Cadwalladr, who writes for the British Sunday newspaper The Observer, appeared before the International Grand Committee on Disinformation and Fake News in Dublin on Thursday, and told the group of legislators that Zuckerberg had shown contempt for democracy by declining to appear.

"A single company has played a critical role in elections in so many countries but is not answerable," Cadwalladr said, adding that Zuckerberg "needs to be subpoenaed by the committee.”

Cadwalladr's reporting revealed in late 2017 that the research firm Cambridge Analytica had harvested personal data from millions of Facebook users without obtaining their consent and used it for political advertising. Her stories led to an international debate about privacy and the integrity of information on the company's platforms.

After testifying, she took to Twitter to allege Zuckerberg lied in previous testimony to the U.S. Congress.

Monika Bickert, Facebook's head of global policy management and counterterrorism, did appear before the committee, and defended the company's record, including its decision not to ban political advertising, which Twitter did last week.

Regarding the circulation of disinformation on its platforms, Bickert said it is not Facebook's job to be "truth police for the entire world."

The grand committee — which consists of members of 12 parliaments, including Canada's — held daylong meetings at the Seanad Éireann, the upper house of the Irish legislature.

One legislator who spoke said he believes social networks have a business model that benefits from creating divisive and toxic information environments.

"Facebook is probably the most toxic political platform," said Eamon Ryan, the leader of the Irish Green Party. "I'd invite you to visit my own Facebook page and see the nature of the commentary that is increasingly prevalent on the platform. It's not a community, it's war."

Bickert denied Ryan's charge and said abuse of Facebook's platforms is unrelated to its business model and that political polarization — something she called a "separate topic" — has been increasing since the 1970s.

"The current business model is the root cause of the problems you are trying to address," Canadian entrepreneur Jim Balsillie said​​​​​. "Its toxicity is unrelenting."

The lone Canadian to speak to Thursday's hearing was businessman and entrepreneur Jim Balsillie — who is currently leading an expert panel on commercial innovation for the Ontario government. The former CEO of Research in Motion, now BlackBerry, also raised concerns about the business models of major Silicon Valley firms, arguing they exploit customers by turning their private data into products.

"The current business model is the root cause of the problems you are trying to address," Balsillie said​​​​​. "Its toxicity is unrelenting. It is not a coding glitch that a legal patch will fix. Data at the micro-personal level gives technology unprecedented power and that’s why data is not the new oil — it’s the new plutonium."

He raised concern that, in North America, exhaustive lobbying efforts by major Silicon Valley firms contributed to Chapter 19 of the recently negotiated United States-Mexico-Canada Agreement, which he said includes "provisions that lock in the current advertising-driven business model and prevent lawmaker oversight of algorithms."

He urged the committee to consider the creation of a new, international organization to work on the co-ordination and enforcement of international technology and data issues, similar to the Financial Stability Board that was created after the 2008 global financial crisis.

Meanwhile, American venture capitalist Roger McNamee, an early investor in Facebook who has since become a leading critic of the firm, told the committee that major tech companies have been resistant to regulation and legislation, and that they should be concerned about their efforts to expand into other sectors.

"Platforms have positioned themselves to replace democratic institutions, with initiatives like Sidewalk Labs’ Waterfront project in Toronto, Facebook’s Libra cryptocurrency, Amazon’s efforts in law enforcement and Microsoft’s services for governments," he said.

Ben Nimmo, a fellow at the Atlantic Council, told the committee that democratic countries should invest in deterrents and training against potential election meddling, noting that at least 70 countries are currently running social media information operations.

“The evidence suggests that a state which has the capability to run domestic information operations can quickly pivot to external targets, if the political need is there," he said. "Russia did so in 2014. Saudi Arabia did so after the murder of Jamal Khashoggi. China did so when the Hong Kong protests began."

The one thing that Social

The one thing that Social media might actually accomplish is more global resistance to the kinds of global exploitation and political manipulation that has be going on for millenia by the hegemonic forces of human power mongering expressed in wars, crusades, genocide, and ultimately colonialism on a civilization destroying scale.

Social media as currently constituted is colonialism/exploitation on a monstrous, planet devouring scale. If we, as ordinary humans don't bring down these tech colossi into some semblence of life preserving, regulated and controlled entities bound by international covenants they will destroy us. It matters not whether these entities are driven by private greed or are entangled in world domination political/government schemes. They currently have the capacity to utterly disrupt human society, to destroy economies, to create gulags of brainwashed, de-humanized peoples as is being attempted in China and North Korea - and who knows where else.

Their "business model" represents and enables all the worst of human nature.

this needs to be front page

this needs to be front page in mainstream media. why isn't it??? Oh ya, they are on team corporation not team citizen

After reading the article. I

After reading the article. I want to share it on social media. Ironic. We used to pick up the phone and talk with people. Now we are all just glued into our tiny devices. Myself, I find there are some groups in Facebook that I was a part of, like the Coast Protectors, Unist’ot’en and refuse, reduce, reuse, but increasingly, these groups are being targeted by trolls and yes, they tie up the moderators with their endless misinformation. When I try to report articles etc, there is nothing in the reporting that says misinformation. It should be Facebook monitoring this. They have billions in profits.

Thanks for the article Sean,

Thanks for the article Sean, keep up the good work Carole.
Zuckerberg should be subpoenaed to face the the committee to get to the truth.
Cambridge Analytica was a travesty of justice that he could have prevented, misinformation has no right in this world, really Facebook how much money do you need? Facebook should be fighting misinformation not fostering.
I have stepped back from the misinformation on Facebook and have reintroduced the reading of reputable newspapers and picking up the phone.
Its easy to deactivate or delete Facebook, go for it, you'll feel a lot better.

It's ironic that at the end

It's ironic that at the end of this article, we readers are invited to "Share on Facebook" by clicking a button...

Personally I terminated my Facebook account more than five years ago - and then made sure that none of my data was retained. Deactivation and deletion took two separate steps back then, and they have probably made it more difficult now.

Oh, and I don't own a "smart" phone either. That helps, if you're concerned about every aspect of your life being tracked and monitored everywhere.

It's not that I have anything in particular to hide; but I always draw the curtains in the bedroom (I live in a house, not a high-rise), and I close the bathroom door, too, even in my own home. Don't you?

It strikes me as 100-words-or-less simple in concept, just near-impossible to execute: you have to shift over an entire communications infrastructure, a whole information environment, to a "clean" alternative. "Clean" probably means that every participant in a given social media system must be identified, trackable, sue-able.
Their every post must be personal and taken responsibility for, not machine-generated. The social media environment must have clear rules for behaviour, and fair, impartial enforcement mechanisms that are not controlled by some company with its own agenda to "smooth things over" (and cover things up). Just like society itself has courts, not a company hired to resolve disputes.

And we have to extricate ourselves from the whole current environment - while using it to organize the new one.

This is just exactly like having to use the existing fossil-fuel infrastructure to build a Green New World. Now, then, should everybody who opens a new Facebook account be vilified as criminals the way that somebody building a pipeline is? No, wait, bad comparison; that would be like condemning a new consumption, condemning a new car lot or airport terminal, which we do NOT do. We vilify providers, so anybody working for Facebook should be treated as a criminal, and especially anybody developing a new social media service - THAT'S like opening a new pipeline. Who invented TikTok? Can we string them up?