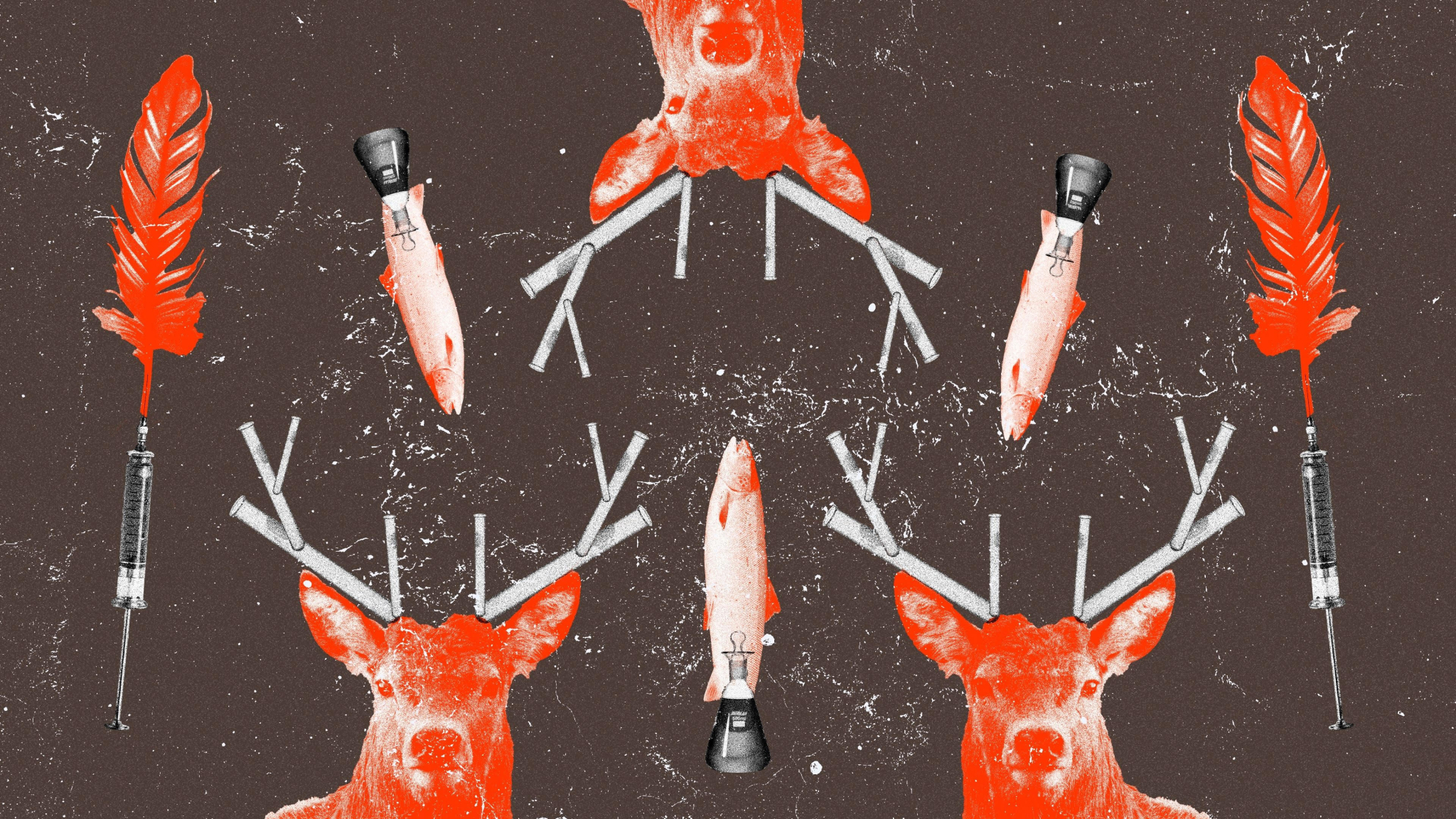 The University of British Columbia (UBC) Indigenous master’s student, who is from Huron-Wendat Nation’s Wendake reserve in Quebec and grew up in Sudbury on Robson-Huron treaty territory, spent time in the California startup mecca earlier this year sampling the products of three lab-grown meat and dairy companies.

As Grant munched lab-manufactured pork, dairy and salmon, she felt a disconnect. As an Indigenous person working on food sovereignty, she’s very aware of the links between food, culture and ecological health. “Once that land goes, or those ways of eating go, Indigenous food culture goes as well,” she says.

But for the companies whose wares she sampled, she says, the implications of what they were doing “felt as though it was new information.” As she talked with founders, the companies seemed like they hadn’t thought about the social consequences of making meat and dairy without the animals — that idea was “something that was maybe separate from the technology,” she says.

Indigenous perspectives have been notably absent from the mainstream conversation about lab-grown meat, also known as “cultured meat,” “clean meat” or “in vitro meat.” But the technology may have important implications for Indigenous cultures, Grant says.

Grant stumbled into the world of cultured meat when she got the chance to attend a workshop early this spring. At the three-day conference hosted by the University of the Fraser Valley, Indigenous Peoples and elders came together with startups and NGOs to discuss the potential impacts of the idea.

Margaret Robinson, a member of Lennox Island First Nation, attempted to figure out how — or if — cultured moose meat could fit into her Mi’kmaq worldview.

She was immediately fascinated. Grant has long been interested in the gap between corporatized solutions to the existential crisis of climate change, she says, and the ways in which those proposals disproportionately impact cultures facing its worst consequences. The lab-grown meat field, which promises to produce animal protein without the impacts of factory farming, is just such a technology.

Her recent trip “was pretty incredible and emotional in a lot of ways,” she says. Grant isn’t as interested in the technological feasibility of lab-grown meat or the startup money behind the concept — she went to Silicon Valley to talk about the potential cultural implications of lab-grown animal flesh.

Grant, like others, worries these products could further separate Indigenous Peoples from sacred animals and drive a stake into Indigenous food sovereignty — in the name of addressing climate change.

“Myself and the other Indigenous person there felt as though it’s powerful for us to raise those voices,” she says. “We were very grateful that [the companies] gave us the space to do it.”

To tour cultured meat production facilities and see the proprietary technologies that companies hold, Grant had to sign many non-disclosure agreements that prohibit her from naming every company she spoke with. But she singles out one, Wildtype, which produces what it calls “sushi-grade” salmon in laboratory vats. Wildtype held a lot of space to dialogue with her and her Indigenous colleague, she says — and, importantly, they didn’t put the burden of figuring out next steps on them.

“It really felt like they are going to put that time into investing into what cross-cultural engagement means and what the societal implications mean for communities, especially Indigenous communities, impacted by this salmon,” she says.

Contacted by Canada’s National Observer, Wildtype CEO Justin Kolbeck said by email that participating in the conference was “an important first step in a broader effort.” His company plans to continue working with Indigenous collaborators to consider the social implications of its lab-grown salmon, he said, and it is looking for any Indigenous people who are interested in weighing in. He included Wildtype’s contact info: [email protected]

Is the moose still my brother if we don’t eat him?

One of the appeals of meat made in a lab is that it’s possible to grow cell cultures from many types of animals, even those that would be cost-prohibitive or logistically impossible to cultivate by farming. This fact has led companies to experiment with a number of meats that have great cultural significance to Indigenous groups across North America, including bison, elk and rabbit, as well as salmon.

Theoretically, at least, it’s possible that many other culturally important meats may be cultivated in the future. In 2016, Margaret Robinson, a member of Lennox Island First Nation and a Dalhousie University professor in the departments of English and sociology and social anthropology, attempted to figure out how — or if — cultured moose meat could fit into her Mi’kmaq worldview.

In Is the Moose Still My Brother if We Don’t Eat Him?, Robinson turned to traditional stories and the teachings of community leaders that establish a high standard of respect and gratitude for the moose and its sacrifice in allowing itself to be hunted and eaten. “For many Mi’kmaq, our relationship with Settlers has usurped the importance that animals once held in our lives,” she wrote. It also divides the communal aspects of meat harvest and distribution. “In vitro meat promises a future where I need not interact with anyone to have moose meat — especially not the moose itself.”

On the other hand, Robinson wrote, perhaps lab-grown moose meat, made using stem cells from wild moose, could represent a renegotiation of the long relationship between her people and the animal.

She is a longtime vegan who has pursued the ethical stance from a desire to express her Mi’kmaw spirituality and connection with other animals while living in a city.

“As I learn more about the history of colonialism, and how the meat and dairy industries motivated land theft and the slaughter of native animals, being vegan has been a way to resist those colonial forces,” she says.

If cultured moose was possible, she wrote, her relationship with living moose could change from one of sacrifice and dependence “and [could] begin to approach something akin to that of relatives who, after a long period of tension, have finally become friends.”

However, Robinson says she herself would prefer not to eat the meat. “It’s still a moose body, even if it died long ago,” she says. “I see lab-grown meat as something for meat eaters, not for me as a vegan.”

In the years since the essay came out, she says, “I’ve come to see some of the challenges that embracing in vitro meat may bring.” Like most other food sciences, she says, “decision-making power isn’t in the hands of Indigenous people, so our values and perspectives aren’t embodied in the technology or the practices.”

Robinson has set her sights on a new problem: the commercialization of food. It prioritizes profit over nutrition and relationships, she says. And she is concerned about what might happen if animal genetic materials are patented the way some seeds have been. “I don’t want a corporation to patent the moose,” she says.

Canada’s National Observer contacted the Assembly of Nova Scotia Mi’kmaw Chiefs for comment on this matter. The chiefs referred us to the Unama’ki Institute of Natural Resources, which had not responded to inquiries by press time.

Tabitha Robin, an assistant professor in UBC's Faculty of Land and Food Systems who studies Indigenous food systems, has also considered and rejected the idea that cultured meat could have a role to play. In her opinion, cellular “animals” are an example of the violence that can be committed against marginalized peoples when their values are ignored, she told Canada’s National Observer by email. “Moose, salmon, deer are kin, not just food.”

There are some signs that as the lab-grown meat field matures, it’s starting to think about these issues, says Evan Bowness, a settler postdoc at the University of the Fraser Valley who has collaborated with Grant and was part of the team that set up the workshop this spring. But there’s still a long way to go, he says. “This is the same as the rest of the food system. We’re highly colonial. We’re super exclusionary.”

Thanks to her experiences this year, Grant is contemplating a new path: starting an Indigenous-led consulting company that will connect people who want to speak about a climate change-related technology, like cultured meat’s potential impacts, with businesses that are trying to assess their own work.

“Social healing and environmental healing, they’re parallel,” she says. “They have to be healed separate but together.”

George Monbiot in his latest

George Monbiot in his latest book suggests that re-wilding land that is currently used to grow meat would be the biggest and easiest way to counteract climate change. In this context, lab grown meat could help keep people alive and healthy and at the same time restore habitat for wild animals like bison, moose, mosquitos and even fish in the sea. Surely a win-win for everyone from vegans to atheists.
Regenesis: Feeding the World Without Devouring the Planet, George Monbiot, 2022

I am tired of goofy theories

I am tired of goofy theories from people who don't actually live in wild spaces. Really tired. This is all theoretical. Know what's not? The FACT that people have successfully lived in and shared wild spaces. Not always -- lots of Indigenous communities have destroyed ecosystems....but we CAN co-habit if we manage ourselves carefully. That means way more connected wild ecosystems and a lot less industrialized food. The vegans should keep in mind that all that plant protein is grown in areas that used to be wild. They're better off eating small amounts of meat from animals that graze in fairly natural ecosystems alongside wild plants and animals, and keeping a couple of hens, feeding them kitchen scraps. Eggs are far better for the world that soy.

And just think: if they

And just think: if they converted 1/6 of that land to growing beans and vegies, there'd be no need for lab made "food" at all.

Does this topic really merit

Does this topic really merit three articles in two weeks?

i think so... one looks at the animal as sharing the land the water the air now the meat thus they give thanks...
i doubt that the average slaughter house provides that same relationship...

Most local slaughterhouses definitely do. I always ask our local abattoir for special treatment for our goats. The response back: "They are all pets." In other words, in a smaller facility, there is time to give animals and people the respect and care that every living thing deserves.
When we stop eating animals and plants that share our ecosystem, everything loses value and is in more danger. Technology and industrialization is rarely the answer.

We should all be so fortunate

We should all be so fortunate -- to be slaughtered in the prime of life with the respect and care we deserve.

Why should artificially produced moose meat (or deer, salmon, rabbit, etc.) have any effect at all on Indigenous culture? No one is saying that indigenous communities can't carry on hunting and fishing if that's what they would prefer to do. I don't see the point of this article.