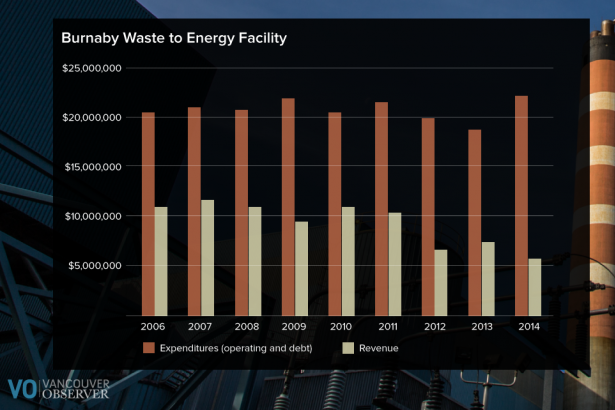 Almost $100 million in upgrades to burn metro Vancouver's garbage and little revenue to show for it. Fifth in a three-month series.

It’s a business model that would likely have gotten an executive team in trouble years ago.

In 2014, Metro Vancouver’s Burnaby waste-to-energy (WTE) facility will cost taxpayers $22 million to operate, including operating expenses and long-term debt servicing charges. On the revenue side, the facility will bring in just a quarter of that amount -- $5.7 million -- by burning garbage and selling electricity to BC Hydro.

Since 2006, the facility has regularly cost taxpayers more than twice what it generates in revenues.

On top of that, Metro Vancouver now has announced it will spend an additional $8 million this year on emission upgrades, adding to the $60 million already spent on improvement to the Burnaby WTE since it opened in 1988. Between 2012 and 2017, the Authority intends to spend an additional $37.5 million upgrading the WTE facility which regularly achieves emission targets set by government.

In total, almost $100 million will be spent on the incinerator since it opened. But the Burnaby waste-to-energy incinerator is a key component of an overall integrated solid waste plan passed by Metro Vancouver in 2010. Part of that is because waste to incineration still generates some income, even if not enough to offset the operating costs.

Today, Metro Vancouver regional authority is now debating whether to spend an extra $480 million to build one (or more) new incinerators to handle the region’s future garbage.

It's a contentious proposal, with big money and big players involved. Several multi-national companies, including Covanta and BC’s Aquilini family, are queuing up to bid on the project. Meanwhile, the neighbouring Fraser Valley Regional District, a major BC business lobby and Vancouver city councillors are opposing incineration.

“City Council has made it clear since 2011 that we do not support the mass burning of garbage,” said Mayor Gregor Robertson in November.

Half a billion taxpayer dollars

The BC Chamber of Commerce is also fighting the proposal, but more because they see it as a costly public project that could create a monopoly and shut out competitors.

“They (Metro Van) have a perfectly good system in place right now that is run by municipalities, and the private sector is doing an excellent job of keeping the landfills busy and diverting waste and getting recyclables out.”

“So here’s our government, that is not elected to do anything like this by the way, no accountability, spending half a billion dollars. It is really a sad state of affairs,” Winter said.

Generating electricity and dollars through incineration

Proponents of the incinerator project, however, say the waste-to-energy incinerator is the best way to keep non-recyclable trash out of the landfills, while still making a bit of revenue from it.

“I believe we are on the appropriate route," Brodie said in a recent interview with The Vancouver Observer. “We rely on scientists and engineers, we rely on planners and all kinds of consultants and experts who will guide us.”

According to BC Hydro statistics, the province’s sole garbage incinerator in Burnaby had the capacity to generate 131 gigawatt hours of electricity last year.

But critics say there's no public demand in BC to generate more electricity through incineration. "It's a really dirty way to be generating electricity, when we have better ways in BC," says Elaine Golds, chair of the Burke Mountain Naturalists conservation committee. The province, in fact, currently produces more than 86 per cent of its power through clean energy sources such as hydro dams, wind and other energy projects.

“Wherever incinerators are used to generate electricity, it is never a very clean process. (It’s) often termed as being dirtier than using coal, because some of the material that gets put into the incinerator shouldn’t be there in the first place," she said.

Across the globe, burning garbage to generate electricity has been an approved method to deal with waste for decades. Metro Van has been generating energy from waste in the Burnaby incinerator since 1988. In the future, Metro Vancouver plans to recycle or divert 80 percent of waste, and use waste-to-energy incineration to recover energy from the remainder. A 2008 US study comparing recycling and waste incineration in 22 states concluded that both are “compatible waste management strategies” that do not inhibit recycling.

The BC Chamber of Commerce contests that if a new incinerator is built, opportunities for private enterprise to capitalize on any valuable materials in garbage bags will disappear.

“There’s no way they’ll have enough garbage to feed that beast by then. Incinerators of this kind in Scandinavia are already bringing waste in from as far away as Italy to feed their appetite because they can’t generate enough in their own community ... to feed these beasts,” says Winter.

“I think it is a terrible, terrible mistake,” says Marc Lee of the Canadian Centre for Policy Alternatives. Lee authored a report last March examining consumer consumption and better ways to recycle. “It will lock us in to needing to produce garbage in order to feed these facilities for decades into the future and that’s not where we should be going.”

The BC Chamber of Commerce says the massive expenditure planned by Metro Van can't be justified, especially when there are companies ready and willing to deal with the excess garbage.

“The technology continues to evolve and develop that will enable MRF’s (material recovery facilities) to take a garbage bag, crack it open and either electronically or physically separate all the stuff in it and divert it to the various streams,” says Winter. “And some will presumably go to an incinerator. Some will go to a landfill, but a lot of it will find its way into a recyclable process.”

How to deal with extra garbage?

Metro Van says MRFs are now part of the waste-management strategy, but even with MRFs and an eventual 80 per cent diversion of the waste stream, there still will be hundreds of thousands of tonnes of garbage left over that must be dealt with.

“If the MRF and all the other programs we have in place do get us to that 80 per cent, we still have 700,000 to deal with,” says Malcolm Brodie.  “If we go further than that, the plan would be that the Burnaby incinerator, which is now 25-years old, by that time it will be 35-40 years old, it’s in three sections, so you start phasing it back and you can easily do that by cutting it incrementally based on the amount of material you are dealing with.”

The BC Chamber of Commerce, private waste haulers, recycling companies and environmentalists have lined up at previous Metro Van Zero Waste Committee meetings to speak out against both the incineration plan and a strategy to control the flow of waste in the region. Elaine Golds of the Burke Mountain Naturalists says even by Metro Van’s own projections, material will be headed for the incinerator that should never be near these facilities.