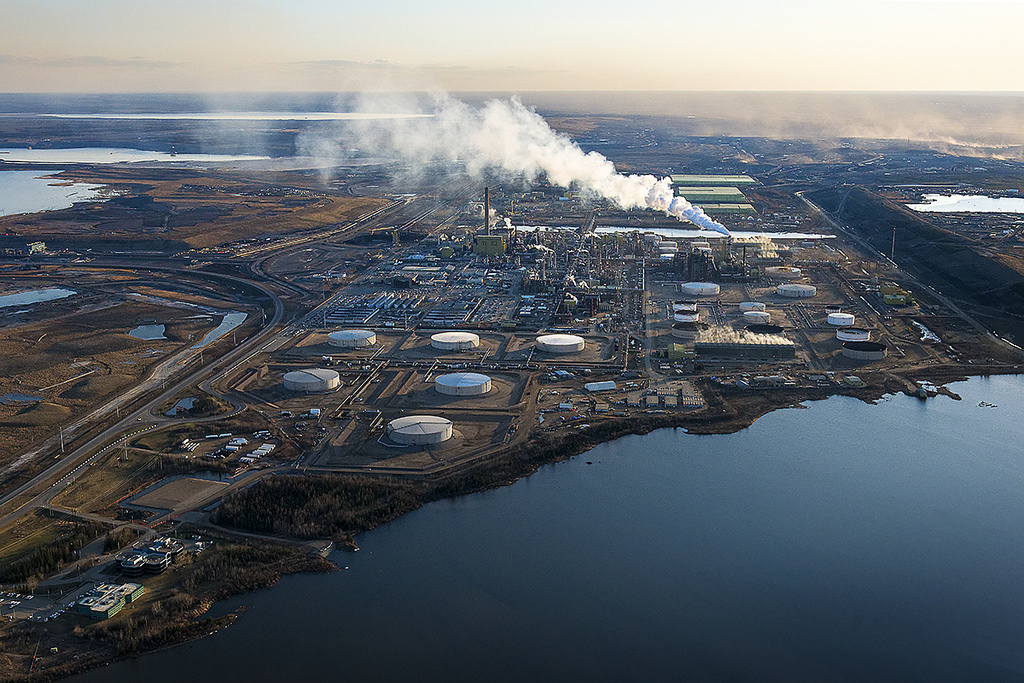 “There’s compelling evidence that [industry contamination] is happening," said Dale Marshall of Environmental Defence, "and that the federal government is denying it, and not allowing that information to be known to Canadians and the people who live in that area."

Canada has already stopped NAFTA twice from investigating its environmental record in the past year. The trade organization’s environmental oversight commission seeks to review public complaints that Canada is ignoring its fishery laws by not acting strongly enough to protect the Athabasca River from industry pollution.

Environmental Defence is one of the complainants to the NAFTA review process, and says the Harper government is "blocking" science from getting out about the oil industry's harm to the watershed.

"Oh, no," said Little, in a media briefing following Archbishop Desmond Tutu's tour of the oil sands. He said oil leaked naturally into the river, and that it was especially visible during hot days.

David Schindler, a water scientist at the University of Alberta, said this claim was false.

"One reason I know industry is responsible for some of [the river pollution] is there's a 1982 well-documented spill for Suncor," Schindler said. "They watched as it made its way down the Athabasca to Athabasca Lake and caused the fisheries to be closed for two years."

Schindler told the Vancouver Observer on Monday it was 'foolish' of industry to claim the oil industry's activities have nothing to do with the Athabasca River's oil pollution.

"Some of it is naturally occurring, but that has been enhanced from both runoff and airborne emissions, as our studies (in 2009 and 2010), Environment Canada's studies and others show," he said. "An industry that size that doesn't pollute is about as believable as the tooth fairy."

Schindler said the Canadian government's actions "are making a mockery of the environmental conditions of NAFTA" and that tailings ponds are polluting the water and damaging air quality as well.

"While the leakage is well-known, it is not yet well-known that there are significant airborne emissions from the tailings ponds," he said.

The Canadian government is likely opposed to the NAFTA's investigation because it is "worried about more bad press," Schindler said.

Suncor was asked for further comment this morning, but did not respond prior to publication.

The tailings ponds, which store a chemical-laden mix of water, residual oil, and clay after oil sands processing, cover over 176 square kilometres of Alberta – an area 1.5 times the size of Vancouver – and have been contaminating groundwater for years.

The oil sands are of intense interest to the American government, as President Obama vowed last week to veto the controversial Keystone XL pipeline, which would effectively expand oil sands production.

Recent federal studies have backed suspicions that toxic chemicals from Alberta’s tailings ponds are seeping into the Athabasca River. First Nations communities living downstream of the Athabasca have abnormally elevated rates of certain types of rare cancers, including bile duct and cervical cancers, which are believed to be linked to pollution from the oil sands.

The Canadian Association of Petroleum Producers (CAPP) has already acknowledged that seepage from tailings ponds can occur, and previous studies have estimated that over 6.5-million litres a day can leak from a single pond.

In December, the United States, Mexico and Canada voted to kill a submission for investigation to NAFTA, after Environment Canada wrote the commission saying "the (investigators) have acted contrary to their authority" and that their submission should be "terminated." The NAFTA commission's legal officer, Hugh Benevides told CBC that Canada's stance on the tailings pond investigation was unusually firm.

NAFTA's Commission on Environmental Co-operation was in set up in 1994 to resolve environmental disputes between Canada, the United States and Mexico. While the committee can recommend an in-depth investigation, it cannot compel the countries to take any action.

Marshall of Environmental Defence believes Canada is trying to prevent the study in order to get the proposed Keystone XL pipeline approved in the U.S.

"It's clear that President Obama is looking at Canada's record when he is thinking about approving or not approving certain pipelines going through the U.S.," Marshall told the CBC. "If this is one more stain on Canada's record, then that plays into his decision potentially."

"Canadians should ask why the Harper government happily spends millions of their tax dollars on U.S. advertising that claims 'world class' environmental standards in the tar sands, yet are blocking independent scrutiny of what is happening on the ground and in the water," Greenpeace climate campaigner Keith Stewart said.

"The sad truth is that trade deals come with legally-binding protections for the profits of the corporations that pollute the water and unenforceable side-deals for those who have to drink it."

The three countries are expected to vote on the tailings ponds issue as early as this week.