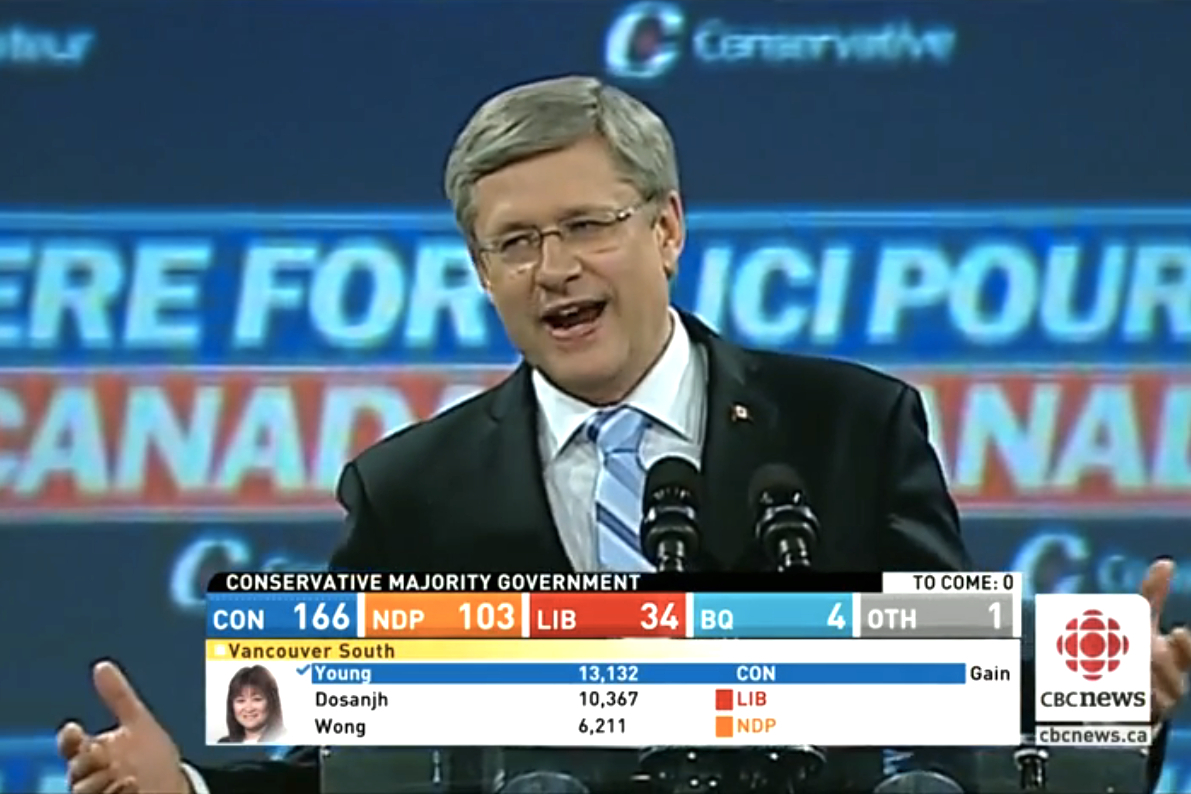 At Vancouver’s Floata Chinese restaurant downtown last week, rank-and-file Tories gathered for a Western Conservative Caucus gala to toast their hopes that Stephen Harper will win a second decade in power in the 2015 election.

B.C., despite its reputation as a “left wing coast," has had a solid Conservative base for some time. In 2011 the party was elected to 21 of the province’s 36 federal seats. Many card-carrying CPC members rushing in last minute for the Vancouver evening’s pre-election soup, said B.C. will go mostly blue once more.

"I think [Harper's] been the strongest on crime and on terrorism, and of course the economy,” said member Moe Panchi last Friday. Calgary MP Jason Kenney flew in for the occasion, while Vancouver South’s Wai Young greeted the mixed crowd. Former Surrey mayor Diane Watts made a cameo appearance, too. She'll try to represent South Surrey-White Rock for the party.

"I absolutely believe that [Harper] will get another majority,” she said.

And with a hint of party-message-training already in the works, Watts suggested Justin Trudeau does not have what it takes to fight terrorism and threats around the world.

"You know, nice fellow, and I know that he means well, but when I think that when we’re dealing with the situations and crises around the world…we really need somebody that is not afraid to make the tough decisions,” she added.

So how is 2015 election likely to play out for the party in BC?

On election night in 2011, Harper gloated about his party’s new, narrowly-held majority hold on Parliament.

"Friends, I have to say it — a strong, stable, national Conservative majority government!" Harper told an ecstatic blue-confettied Calgary crowd at the time.

But a lot has changed since 2011. Ottawa approved the controversial Enbridge Northern Gateway with conditions, and ushered in sweeping pro-resource development changes at the NEB— and many changes to environmental laws, including the Fisheries Act and the Navigable Waters Protection Act.

Environmental advocates have warned that these changes, as well as the Enbridge pipeline approval, will hurt the Conservatives during the federal election. But a University of Toronto academic believes pipeline politics may turn out to be irrelevant. "I think that the people who are against the pipeline, I don’t think they were voting Conservative last time anyway,” said Professor Nelson Wiseman, who teaches political science.

“And the people who were for the pipeline were more likely to vote Conservative…so I don’t think that’s a big new issue, or that that’s going to swing a lot of votes." Closer to home, Vancouver pollster Mario Canseco, VP of Insights West, agrees the issue of pipelines is polarizing. But he believes the outcome of the election in B.C. will rest on the battle between the Liberals and the NDP.

"For the past few elections, we’ve had a scenario where the share of the vote for the Liberal Party has dropped, with the progressive vote going to the NDP and the more centrist voters opting for the Conservatives,” he said. "Now, with the Liberals doing better at the national stage, there is a big question surrounding how some of the soft supporters of both the NDP and the Conservatives in BC will vote. Do they stay where they were in 2011, or support Liberal candidates expecting a Liberal victory?”

Mario Canseco added that he doubts the Conservative stronghold in BC’s interior will change, where tough-on-crime and low-tax messages have voter appeal, he said. Likewise, market researcher Barb Justason says the election here will be won over a range of issues.

“Not just pipelines in British Columbia. There’s lots who are concerned about privacy and all of the stuff that got revealed in the last little while, and also just the Conservatives’ environmental policies in general,” she said.

Due to population growth, B.C. will add six new seats to the province’s 42 in the next House of Commons make-up. Nationally, Parliament will have 338 seats in total, up from 308.

Five of the new seats are in the Lower Mainland, and one is on Vancouver Island.

Mario Canseco says he's keeping his eye on the new riding of Burnaby-North Seymour, where there may be a split between Liberals, NDP and the Greens.

Analysts also say the new Vancouver Granville riding will be one to watch. The new riding has a composition of neighbourhoods, from ridings now held by Conservatives, New Democrats and Liberals.

With files from Jenny Uechi and Sindhu Dharmarajah.

CORRECTION: an earlier version of this story said that Flota restaurant served shark fin soup. That was an error. We apologize for this.