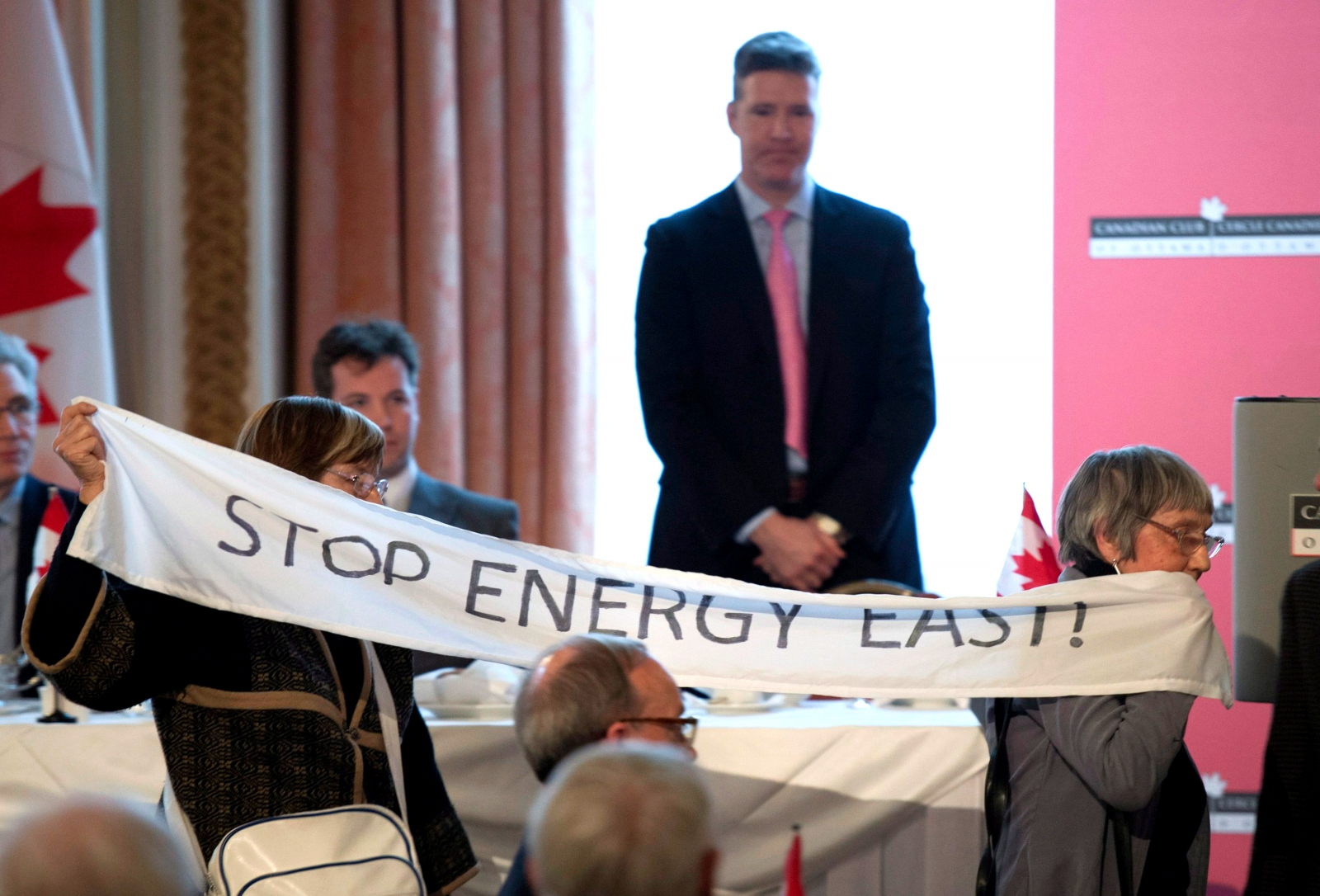 “This whole movement towards protecting the environment, and against extractivisim, is being embraced by a much larger population now," said a senior with a Vancouver choir.

A protest stunt that made national headlines last week in Ottawa over the Energy East pipeline was put on by four self-described grandmothers.

The incident is provoking chats in cafes and knitting clubs about the increasing role that the elderly play in pipeline battles.

The four women, all in their seventies, Gail O’Brian, Josephine Wood, Ria Heynan, and Bessa Whitmore, packed their purses with “Stop Energy East!” and “You can’t drink oil” banners.

Their intent was to send a different kind of message than the pipeline’s CEO Francois Poirer wanted to give at the corporate luncheon.

The women each paid $40 each (the senior’s rate) to attend the Château Laurier event last Monday. When the time was right, the matriarchs sprung into action with faces flushed.

“Your heart is going pretty hard. But we also knew that, even though it was civil disobedience, it was very benign," said 75-year-old Whitmore, a former social work professor from Carleton University.

“I knew that the worst that could happen was we were going to be kick us out,” she laughed.

The incident lasted a mere two minutes, before the emcee said: "Thank you ladies, you've made your point. Now we'd like you to leave."

Then a security guard nudged one of them along. Whitmore says they were not “manhandled” or grappled in any way.

She added, the youngest among the foursome is seventy years old — “she’s the baby in the group,” she joked.

But the women say the pipeline is not wise in a dangerously warming world.

“I just finished Naomi Klein’s book… it solidified my enormous concern over climate change and fossil fuels. And building pipelines to transport bitumen across the country, it’s just the wrong thing to do," said Whitmore.

Many activists, including pipeline opponents on the west coast, are realizing the benefits of involving the elderly in energy protests, says Carole Crabtree, a senior with “Solidarity Notes” choir in Vancouver.

The multi-age singers -- along with another seniors group "Raging Grannies" -- were active on Burnaby Mountain during the recent clashes in protest of the Trans Mountain pipeline expansion project. Notably, seniors sang old tunes to give encouragement to those risking arrest.

Unburdened by the worries of career and profession, retirees are jumping into the protests, Crabtree said.

“This whole movement towards protecting the environment, and against extractivisim, is being embraced by a much larger population now.”

The seniors she knows are saying that this is not what they want to see as part of Canada.

Many of the 100 or so people arrested on Burnaby Mountain in November were retirees, including an ex-physician, a retired school teacher, a former French UBC professor, and an 87-year-old rebel rouser named Jean McLaren.

The frail octogenarian protester had RCMP scratching their heads. Though many of those arrested were taken into custody peacefully, a smaller number had to be forced into compliance.

But McLaren's aged presence seemed to have a calming effect on the energy conflict. She said she just wanted to make a point.

"I want something for my kids, and my grandchildren,” said McLaren to reporters, while standing in front of the RCMP police tape, with Kinder Morgan drillers just metres away.

"I want them to be able to grow up and live, and not be dying [from climate change] like a lot of people are."

McLaren then crossed the police tape, and was gingerly taken into custody. A few minutes later she was released -- apparently not seen as a major security risk.

Crowds watching her cheered as she was led by arm into a police truck for a personal escort home.

“I had a good day,” she smiled to reporters, before ducking her head into the police vehicle.