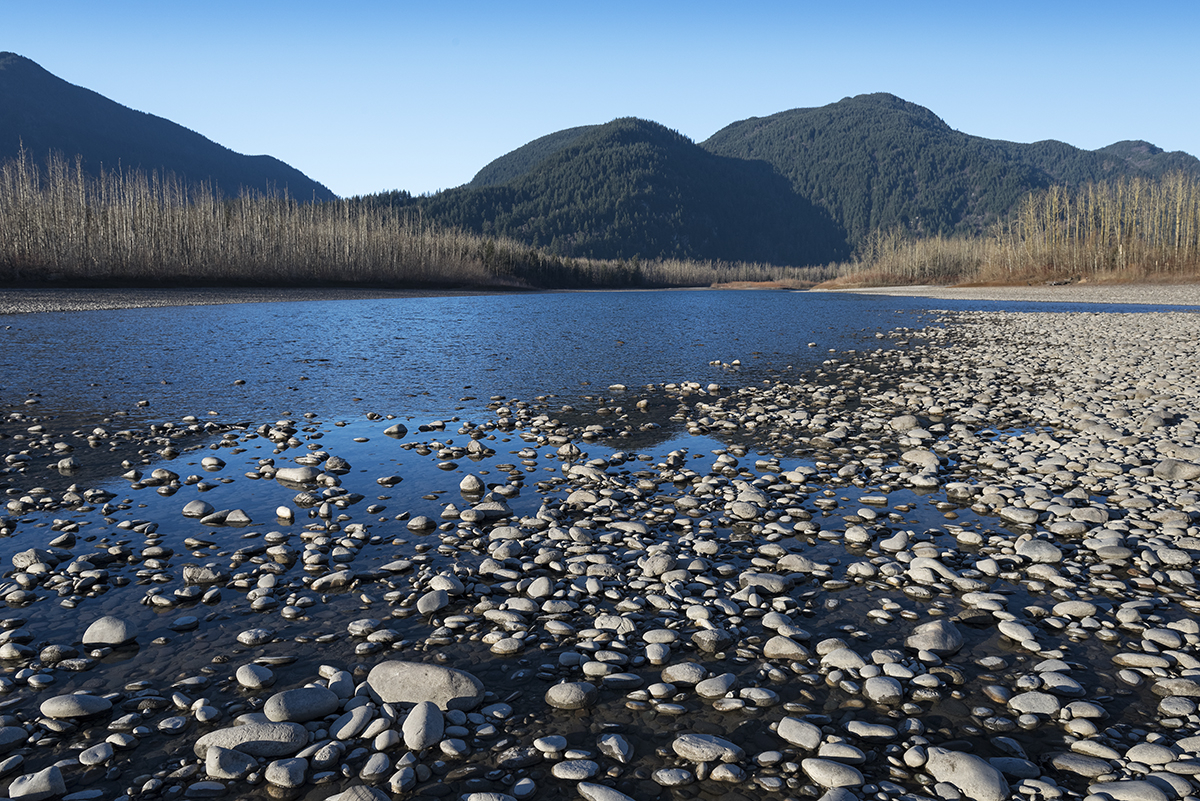 Scientists say money and connections have too much power in B.C. politics, following the green-lighting of a controversial gravel mining project on the Fraser River expected to have serious impact on sturgeon and salmon habitat.

"Is the Pope Catholic? I am not trying to be trite, but the history of Fraser River gravel removal has been one of constant and intensive political interference from the gravel interests in the eastern Fraser Valley."

The Seabird Island First Nation, in partnership with Chilliwack-based Jakes Construction, has applied to remove 105,000 cubic metres of gravel in the area known as the "Heart of the Fraser" from a site called Seabird Bar B near Agassiz, B.C.

Last week, the provincial government quietly green-lighted the project, although Seabird Island has yet to formally accept the approval. One of the conditions for the approval is that Seabird must implement an onsite monitoring program to identify and track impacts, which the Band's corporate affairs director said will take place.

UBC political science professor Maxwell Cameron said one of the underlying problems was that there are no limits to political contributions in B.C., unlike in other provinces like Ontario and Alberta.

"Of course, companies expect something in return for their donations, and they influence public policy," said Cameron.

"What policy makers should ask themselves is whether the public might reasonably assume that the donation was made in order to influence the policy decision. If this seems like a reasonable assumption, then there is a risk to the public perception of integrity."

The Fraser River is one of the few places on earth where "truly wild sturgeon" can still be found, according to the Fraser River Sturgeon Conservation Society. The sturgeon is considered a living fossil because it has survived virtually unchanged for more than 150 million years. They are a global rarity for their size and age, and can grow to six meters long.

Sturgeon are a federally listed species at risk. The lower Fraser sturgeon stock, which would be affected by this project, have been left off this list.

Former government scientists say politics have sealed the fate of one of only two known spawning sites for the Lower Fraser white sturgeon.

But BCSSGA executive director Paul Allard said political contributions have had no impact on the government's approval.

"We are a not-for-profit association that is not linked to any political party," Allard said. "Your speculations are just that, speculations."

Former federal fisheries biologist Otto Langer said he couldn't comment on whether the gravel industry's donations to the B.C. Liberals influenced their call on the Seabird project.

But he said "the public is misinformed if people think industry will give political parties money and not expect anything in return."

Even on the federal level, he said, regulators appear to have ignored science in approving the project.

"We expected better, but DFO has become such a political agency," he said. "Government has neutered the Fisheries Act... and DFO has been disappearing on a number of projects in the last eight years. It's gotten really bad in the last couple of years."

The Seabird project has put some First Nations and the gravel industry at odds with river conservationists. Critics say public consultation was never truly part of the process. The province only has a one-page PDF of a map on its website of the gravel mining project it has just approved. The full application has not been made public.

David Suzuki Foundation's senior science advisor John Werring said it was "scary" that the public had no say about the future of the river often referred to as being "at the heart of B.C."

"We have a crown resource that belongs to the people of Canada. It can be exploited by commercial interests and no one has the right to see the documents."

Conservationists are closely watching the Seabird Island proposal as a "test case" that could open the gates for future gravel mining projects along the Fraser River, although B.C. Forests, Land and Natural Resources Management spokesperson Greig Bethel said each new project will be judged on a case by case basis.

Gravel mining is part of a $300 million-a-year aggregate (crushed rock, gravel and sand) industry. Companies have mined other areas of the Fraser since the 1950s. The Seabird Island Band argues the project is not about money, but states that gravel must be extracted to protect reserve lands from erosion, which has led to the loss of 12 to 15 per cent of the band's territory to date.

"One of the things we realize is that there are natural erosion effects to the river, obviously we live within it’s confines, we know how naturally erosion takes place," said Seabird Island Band corporate affairs director Jay Hope.

"It’s about the safety and security of our reserve lands and our community, and erosion and flooding go hand in hand. That’s the number one priority for us – not economic gain... We accept that we may not make too much money on this.”

Proponents of gravel mining have often used flood and erosion prevention to justify removing gravel from the Fraser River, though recent studies suggest that it has no real effect on flood prevention.

In the middle of the project is Seabird Island Band lobbyist and former Chilliwack MLA John Les, who was a vocal proponent of gravel mining during his political career, and has strong family connections to the gravel mining industry.

Les is related to Jake Klaassen of Jakes Construction through the marriage of their daughters into the Kooyman family of Chilliwack Cattle Sales. His former campaign manager, Diane Janzen, is currently employed by the Seabird Island Band as band education manager, although she told The Vancouver Observer she had no involvement in the Seabird gravel mining project.

According to an email obtained by Integrity BC, Les invited 21 individuals to a BC Liberal fundraiser Abbotsford on October 22, 2013. In the email, Les promises attendees "a generous opportunity to meet and speak personally with the Premier," noting that "several MLAs will also be in attendance."

"Time and again, the same pattern emerges: if you want a project approved by the B.C. government, it doesn't hurt to pull out your cheque book for the BC Liberal party first and hire one of the party's insiders to press the case for you with ministers next," Integrity BC Executive Director Dermod Travis said.

Les was reached several times for comment, but did not respond.

But BCSSGA's Paul Allard said these gravel mining projects aren't about money when it comes to the Fraser River.

"The removal of aggregate from the Fraser River is normally required in order to stop the surrounding farmlands from being eroded away," Allard said.

"The cost of extraction of the river gravels is substantially higher than on land-based aggregate mines and therefore the final products are not saleable at current market prices... by the time the contractor relocates the materials, then processes them into saleable product, the costs to the consumer are too high and the product usually sits there for a long period of time, unsold."

"So why's there a line-up to mine the gravel?... Sounds like a bad investment if they don't make any money from it."

A BC Business magazine article from 2010 estimated that a previous gravel mining operation by the Seabird Island Band and Jakes Construction (at Spring Bar) resulted in the capture of 570,000 tonnes gravel worth $2.25 million on the aggregate market. At the article's estimated "lowball" royalty rate of 40 cents a tonne, this would have yielded a $228,000 royalty to the Seabird Island Band.

Seabird Island's Hope said the current project won't yield much profit, but said there is an "element of employment" for the band.

"Jakes Construction is really good at working with the community. [Company founder Jake Klaassen] understands our needs in terms of our employment needs and our social needs as well. We’ve done a number of projects with him."

Public left out of the loop

Opponents of the project say that recent law changes have made it harder for the public to obtain information and have a say on industrial projects along rivers.

Since the 2012 omnibus bills by the federal government, gravel mining projects no longer trigger an environmental assessment unless they will cause permanent harm to the environment, or destroy certain types of endangered or commercially used fish.

"The Fraser River is a Canadian Heritage River," Werring said.

"There is nothing natural, cultural or recreational about mining tonnes of gravel from a river simply to try to provide the aggregate industry with a cheap source of material in order to meet an insatiable, and growing, need to build infrastructure."

Werring said that in the past, when a request for this kind of industrial project in the Fraser River was made, it would automatically trigger a review under the Canadian Environmental Assessment Act. The government would then look at the project's potential impact on fish, fish habitat and the environment.

Now, he said, there is no need for an environmental assessment for projects like these, except in very limited circumstances.

Langer said he and others have had to put in Freedom of Information requests to have a look at the previous version of the Seabird gravel mining project.

"This is an insult to the public interest. People are applying to see the impact to the environment or on their neighbourhood, and they're not allowed to see what that is? I can't comprehend that in Canada. I thought we were living in a democracy."

"We know how to manage the river best"

Hope told The Vancouver Observer that the project was not about profits, and that the Seabird Island Band would take measures not to ruin habitat for salmon and sturgeon.

“We think as First Nations people, we know how to manage the river best. We know the river. We’ve been here for millennia, we understand the river. In any extraction that we propose, we always frame it in terms of the protection of our reserve land. That is first and foremost.

"We take that seriously, and we want to hold Canada to account in terms of its fiduciary responsibility towards us.”

He said the majority of Seabird Island Band's 950 members live on reserve, which he says is shrinking because of erosion from the Fraser River.

“Seabird's land was originally surveyed at 4,500 acres. And since then we’ve lost 275 hectares to the river erosion. It’s quite significant," he said. "Our reserve (population) is growing, and we need to have a place for everyone to live."

Hope insists that “erosion and flooding go hand in hand,” and says the gravel mining will help secure the band's territory.

“There may be a perspective out there that we purely in this for economics – and that’s not accurate whatsoever. We want to protect our reserve lands," he said.

Hope said the project's original design was changed recently so that instead of deep digging of rocks from the river, it would use a "scalping technique," which he said is expected to cause less harm to fish habitat.

But gravel mining has had a devastating impact on Fraser River wildlife in the past. In 2006, around two million pink salmon fry were killed when an extraction company cut off the spawning channel along a channel island called Big Bar. Conservationists like Rosenau argue that Seabird Island's project should not give the government a justification to approve more gravel mining, as the damage would make Big Bar would look "trivial" by comparison.

“We accept that there is criticism out there," Hope said. "But what we’d like to do is reach out to those people and say come see what we’re dealing with here. Come look at the project design, and the area in particular.”

With files from Katelyn Verstraten