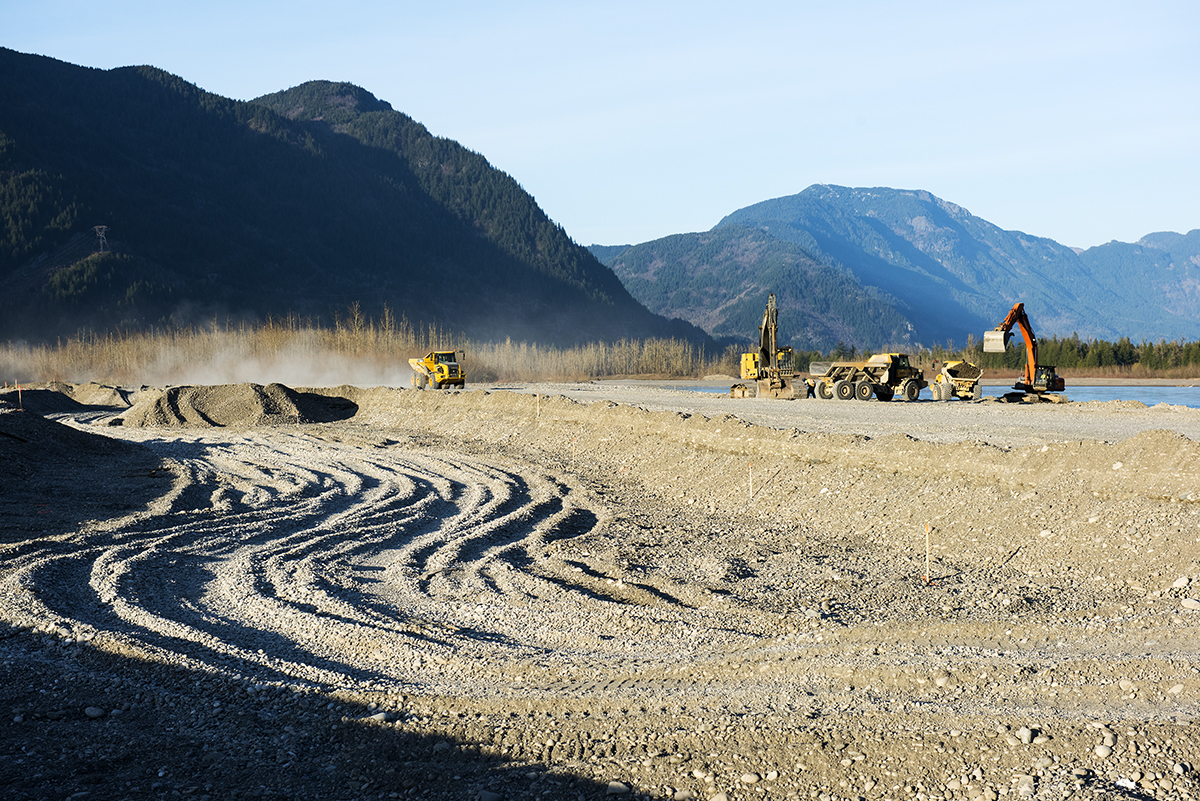 Power shovels have begun excavating 105,000 cubic metres of gravel in the area known as the "Heart of the Fraser" from a site called Seabird Bar B, located on reserve lands near Agassiz, B.C.

Seabird Island Band and Jakes Construction's received the green light to mine in the area, despite fierce opposition from fish biologists.

BC Sportfishing Group owner Tony Nootebos said he was deeply disturbed by the federal and provincial governments' recent approval of the controversial mining project in one of only two known spawning areas for the Lower Fraser River white sturgeon.

"We know, 100 per cent, that it’s a sensitive area. There's proof that sturgeon are spawning in there," Nootebos said.

Nootebos emphasized he wasn't against gravel mining in general.

But he questioned why the province allowed industry to dig up a sensitive fish habitat, even as it was advising sport fishers to stay away from the area during certain months.

"It's sort of disturbing," said Brian McKinley, a guide and owner of Silversides Fishing Adventures. McKinley said he voluntarily steered clear of fishing at that site for years to honour government recommendations to not disturb sturgeon spawning habitat.

Sturgeon are a federally listed species at risk, though the lower Fraser sturgeon stock, which may be damaged by this project, have been left off this list. Sturgeon are considered a living fossil because they have survived virtually unchanged for more than 150 million years. They can live for over 150 years, and grow to more than six metres long.

Photo of gravel being mined by Andrew S. Wright

Nootebos said people from all over the world come to see the Fraser River sturgeon. He said over 40 per cent of his clients come from Europe to experience catch-and-release fishing of sturgeon.

"We're finding that sturgeon are increasingly popular because, well, they're huge," McKinley said. "People come from the UK, Germany, Japan and Australia to see them."

Photo of Lower Fraser white sturgeon from BC Sportfishing Group

B.C. Forests, Lands and Natural Resources spokesperson Vivian Thomas confirmed that the provincial sturgeon expert worked with anglers and guides and asked them last year "if they were willing not to fish in the side channel north of Seabird Bar during the spawning period."

She said, however, that "the actual extraction area is at the south side of Seabird Bar" and that "this area is "not a confirmed area for spawning by sturgeon."

It's a claim that biologists dispute, saying the spawning grounds are very close if not overlapping with the area where gravel is being mined.

Risking the sport fishing industry along the Fraser

The gravel mining project by Seabird Island Band is in partnership with Jakes Construction, a Chilliwack-based gravel mining company that has provided training and jobs to the band since the mid-90s. Gravel is part of a $300 million-a-year aggregate (crushed rock, gravel and sand) industry, and is used in the construction of roads, home foundations, sidewalks and bridges.

Seabird Island Band corporate affairs director Jay Hope said there was "an element of employment" associated with the project, but said the main purpose of mining the gravel was to protect land from erosion.

But Nootebos said before approving the mining, the provincial government's own staff had asked sports fishers to keep out of Seabird Bar B because of the risk of disturbing wild sturgeon.

As a result, the Fraser River Angling Guides Association and the sport fishing community agreed to voluntary closure of that area during sturgeon spawning from mid-May through July, he said.
"But now the province is allowing gravel removal in that same spot, which we know will have an impact."
Currently, the Seabird Bar B area has low water levels, allowing heavy machine operators to dig up the gravel. But now, when the sturgeon come to spawn, some could find part of their habitat destroyed, said Fraser River Sturgeon Conservation Society chair Karl English, a fisheries biologist.

"This location is important as it actually is a fairly stable area. Just upstream is where the sturgeon are releasing their eggs," English explained.

"The eggs drift downstream and then sink and attach to the rocks. They hatch, and the sturgeon have to get into these spaces between the gravel which have protection from predators."

Now that machines are digging up and compacting the gravel, English says, there will be nowhere for the juvenile sturgeon to go.

"They'll get gobbled up by predators," he said.

Ignoring the government's own science?

Nootebos said the B.C. government was well aware of the risks, based on evidence presented by its own biologists.

"The province is completely aware of the evidence," he said. "Their biologists have been involved in some of the sturgeon spawning assessment work there."

He said the province was involved in 2010 and 2011 in research that identified the Seabird Bar B area as important sturgeon spawning habitat.

What's more, recent research suggests that the sturgeon are a population in steady decline, not unlike the Atlantic cod on the east coast.

"It’s hugely frustrating when you go through all this effort and provide information on this well in advance and they ignore it," said English, whose group presented scientific evidence to the province prior to the project approval.

Nootebos thinks the project, which scientists fear will set a precedent for more gravel mining in the sensitive habitat, will threaten a $12 million-a-year sport fishing industry.

"It'll risk the industry, there's no question about it," he said. "I don't know how much [money] the gravel mining would bring but it's nowhere near that, year over year. We know sport fishing provides a lot of new dollars to the province, not recycled dollars. And it's in a sustainable way."

McKinley expressed frustration not over "poor management" of the Fraser River by authorities, not only regarding gravel mining in a sturgeon spawning habitat, but also for projects such as a toxic waste recycling plant, which has been approved by Chilliwack and is now under provincial review.