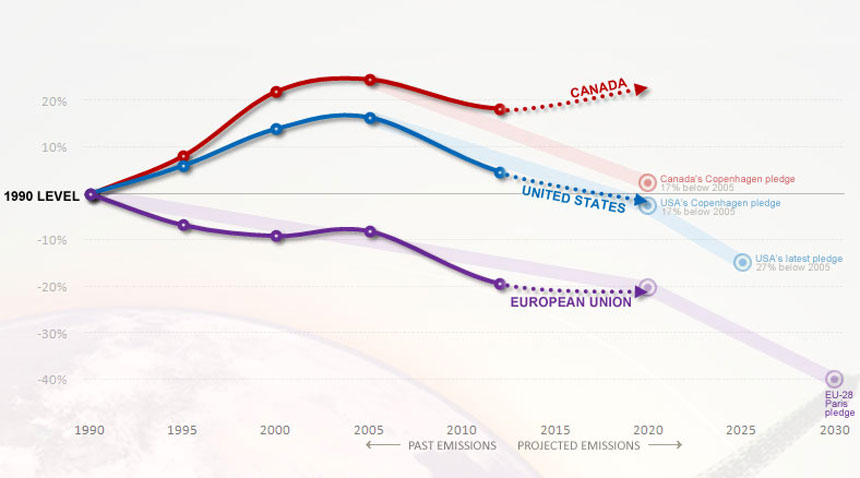 As the world heads into the critical Paris 2015 climate conference, global pressure is increasing for nations to meet their current climate targets, and to pledge ambitious new targets for 2030.

A key strategy to avoid a repeat of Copenhagen 2009's failure is a requirement that all nations make their 2030 climate pledge known well before the Paris 2015 conference. This gives several months for the world to exert pressure on any foot-dragging nations to increase their ambition in the climate fight.

With pressure building and time running short, let's look at how Canada and it two largest trading partners — USA and European Union (EU28) — are doing so far.

To compare how these three are doing on climate promises and ambition, I created the chart below using each nation's official climate publications.

Both America and the EU28 are on track to meet their 2020 targets. Both have recently pledged new targets that require them to double their pace of emissions cuts.

Here are the details.

Going forward, the EU28 has unveiled their new 2030 commitment for Paris. Their new target is 40 per cent less climate pollution than in 1990. To meet this they will have to cut carbon emissions twice as quickly: 2 per cent per year.

Bottom line: On track and doubling their ambition.

The Americans took longer to join the climate fight, but since then, they have led the world in total climate pollution cuts.

It wasn't until the Copenhagen 2009 climate conference that the US adopted a formal climate target. President Obama pledged that Americans would cut emissions 17 per cent below 2005 by 2020.

As my chart shows, this works out to 3 per cent below their 1990 level. While this is less than the Europeans compared to 1990, the Americans pledge has been more ambitious per year.

So far the Americans have cut emissions a bit faster than required. In addition they have a detailed plan that they project will get them close, and possibly beyond, their 2020 target.

Going forward, the US has unilaterally pledged to cut emissions another 10 per cent by 2025. That doubles the rate of pollution cuts per year and would leave them 15 per cent below 1990 by then. The Americans haven't unveiled their 2030 pledge yet.

Bottom line: On track and doubling their ambition.

Canada projects climate failure, silent on next round

In contrast to its two biggest trading partners, Canada is not cutting emissions fast enough and still lacks a plan to meet its 2020 target.

In 2009, both Prime Minister Stephen Harper and US President Barack Obama pledged to cut their nation's emissions to 17 per cent below their 2005 level by 2020. For Canada, this target works out to 3 per cent above their 1990 level.

As my chart shows, however, the climate pollution gap between the Americans and Canadians has been growing progressively wider since 1990. And projections for 2020 show Canada's climate gap becoming a chasm without aggressive new climate policies very soon.

Going forward, the Harper government has been quiet about Canada's new 2030 target. Something needs to be announced soon. It's going to be interesting.

A few other nations that have announced 2030 climate pledges:

Next up: warnings from world's best climate science…

As my next article will show, the latest and best climate science is clear that "widespread" and "unprecedented" changes are already upon us. The same science warns that these negative impacts will grow ever more dangerous until we stop fueling the crisis with our climate pollution.

Notes and sources for this article's chart: