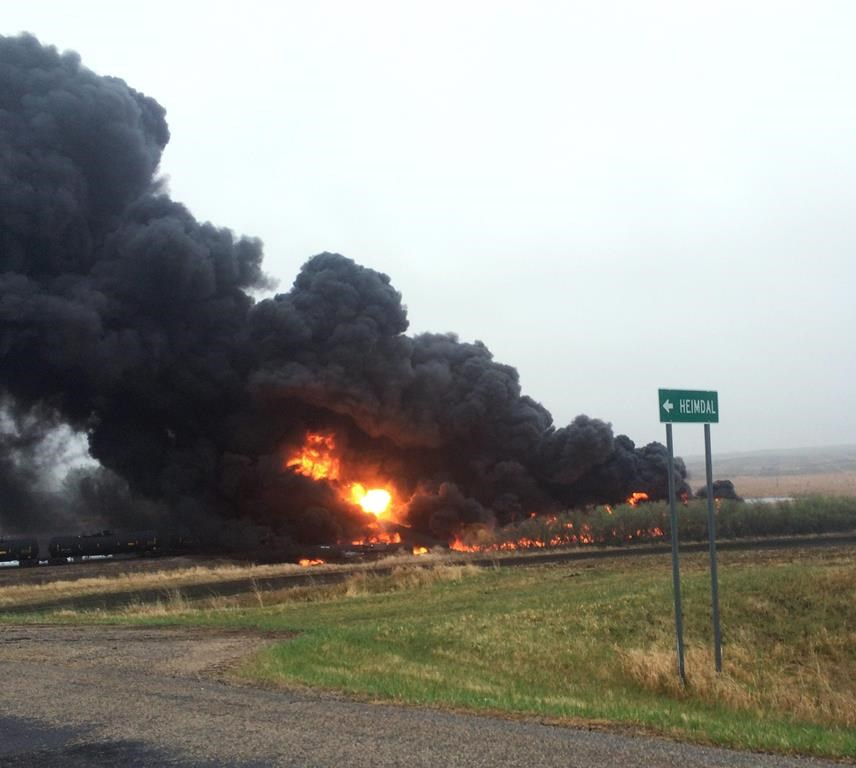 BISMARCK, N.D. — An oil train derailed and caught fire early Wednesday in a rural area of central North Dakota, prompting the evacuation of a nearby town where about three dozen people live.

No injuries were reported in the accident, which happened about 7:30 a.m. near Heimdal, about 115 miles northeast of Bismarck. The residents who left were staying with family and friends, Wells County Emergency Manager Tammy Roehrich said.

"The engine and cars that aren't burning have been decoupled and moved to safety," she said.

Firefighters from four area communities responded to the fire, and regional hazardous materials teams from Grand Forks and Devils Lake were sent to the scene, Fong said. A team of 10 investigators from the Federal Railroad Administration was expected to arrive on the scene by mid-day Wednesday, said spokesman Kevin Thompson.

The Environmental Protection Agency was sending someone to the site to gauge any contamination to waterways in the vicinity of the derailment, spokesman Rich Mylott said. The rail line through Heimdal runs next to an intermittent waterway known as the Big Slough, which drains into the James River about 15 miles downstream near Bremen, North Dakota.

It was unclear how many cars were part of the train or how many derailed. There was no immediate word on the cause of the wreck or on the source of the oil the train was carrying. A statement from BNSF did not cite the source, and officials did not immediately return calls from The Associated Press.

Since 2006, the U.S. and Canada have seen at least 24 oil train accidents involving a fire, derailment or significant amount of fuel spilled, according to federal accident records reviewed by the AP. The derailment Wednesday was the fifth this year and comes less than a week after the Department of Transportation announced a rule to toughen construction standards for tens of thousands of tank cars that haul oil and other flammable liquids.

FRA Administrator Sarah Feinberg said in a statement that the accident was "yet another reminder" of the need for changes that have been resisted by the oil industry, which says it will take years to get the unsafe tank cars replaced or off the tracks.

BNSF said the tank cars that derailed were constructed under a 2011 voluntary rail industry standard intended to make them tougher than older cars that were long known to pose a safety risk. But the new cars have proved equally dangerous. The five major oil train accidents so far this year in the U.S. and Canada all involved the newer cars, each of which can hold about 30,000 gallons of fuel.

Roughly 22,000 of the cars are in service hauling crude oil and must be retrofitted or replaced by 2020 under the new federal rule. Cars hauling ethanol, another fuel involved in multiple accidents, have a longer timeline for replacement.

It was not immediately known if the oil had been processed under the state's new rules that were meant to reduce the volatility of North Dakota crude by stripping out gases that can easily ignite, Thompson said. North Dakota officials have said the rules would make the volatility of treated oil comparable to gasoline. Critics have said the state's requirements were too lax and insufficient to prevent major fires.