By Linda Solomon Wood | Opinion | May 10th 2015
#1 of 9 articles from the Special Report: After the Nepal Earthquake 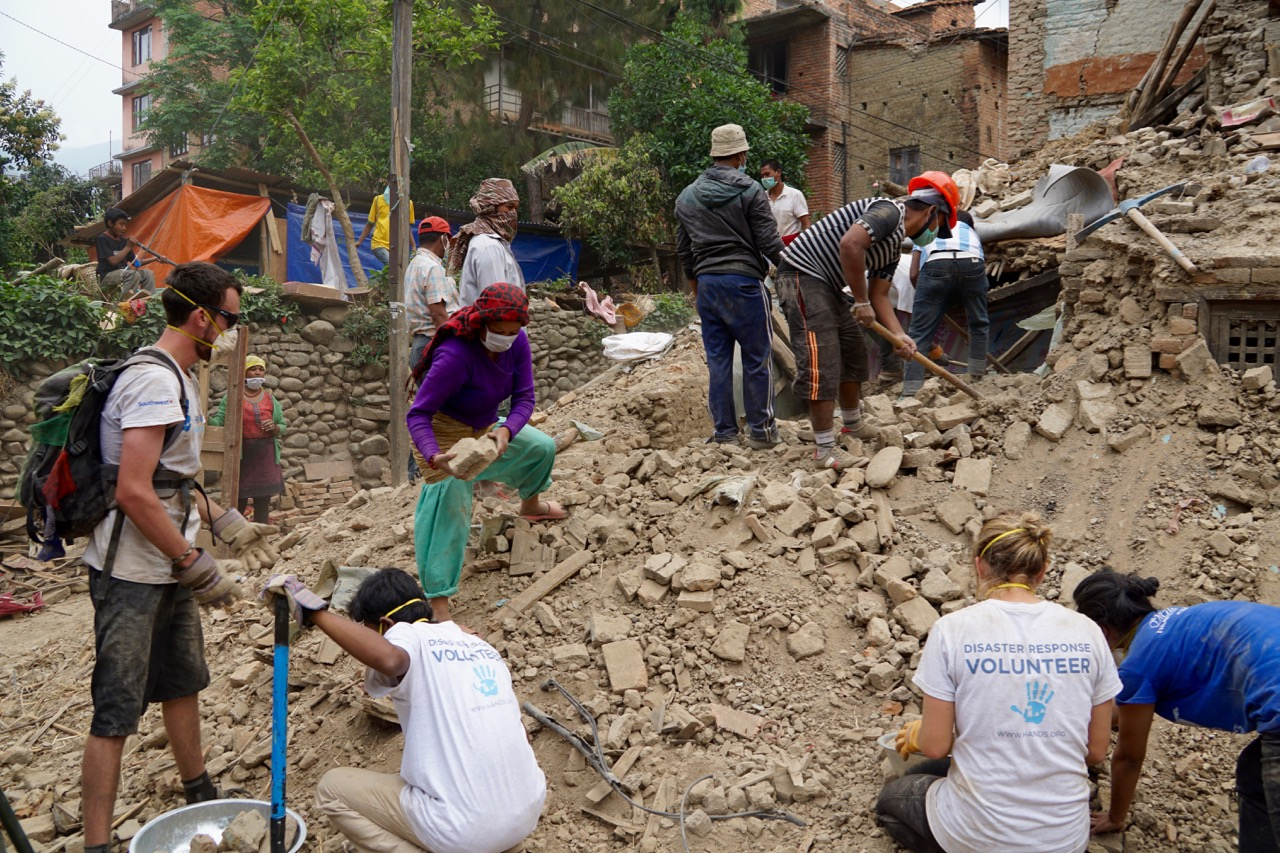 My husband and son traveled to Nepal this week. They were scheduled to leave the week before on a flight booked months ago. Then the earthquake hit.

My husband first visited Nepal 16 years ago to volunteer teach in a remote mountain village, after a trip that took him around the world.

David was developing complex IT business systems for Fortune 500 companies, but teaching was the hardest job he ever had. "All those faces looking up at you expectantly, every hour, every day...."

During his months of teaching, he saw how hard it was for the girls in the village to stay in school. The age old cultural traditions were gender-biased towards boys, and when it came to school girls were second class citizens.

Some walked each day up and down miles of trail to get to school. All came from poor families who farmed the sharp, steep mountainsides. The girls knew the value of staying in school. They mainly aspired to become nurses or teachers. But these dreams crashed when their parents removed them from class to help in the fields, or because they'd found them a husband. David watched them leave and they never came back.

It inspired him to start Kina.org, a non profit with one mission: keeping girls in school.

Back in Vancouver, he raised funds for the girls who range in age from kindergarten to university level.

And Kina kept him returning to Nepal year after year.

Four years ago, I got to go along and so did Eli, who was then 14. We trekked for a week, far up into the mountains to remote villages where Kina provided support to women's empowerment projects and where we met some of the girls receiving scholarship support from Kina. They had hiked from as far as we had from different directions to meet David. Of course, for them, hiking long distances was ordinary. For us, it was epic adventure.

Now Kina supports about a hundred girls making their way through school, thanks to donations coming from mainly Canadian donors.

Eli was home from University of Victoria for reading week when David asked him to do some work for Kina this summer in Nepal and Eli was thrilled.

He would be recording the girls’ stories and training them to use computers.

He'd be helping to construct a new hostel for university level young women and working with David to develop an SMS texting solution that allows the students to fire off school questions to mentors. He'd be doing maintenance work on a hostel Kina helped build that provides girls from far flung villages with safe housing near the region's colleges.

But when the Nepal earthquake struck, David was left to wonder and worry about what had become of the girls, the team, and the many friends he had made over the past 15 years. He managed to touch base with Ben Ayers, a Kina board member who was in a mountain village that was extensively damaged during the quake, and with Karma Sherpa, founder of The Small World, an organization which partners with Kina on some of its projects.

David got through to Karma, confirmed that his wife and two babies were fine, and over the next few days, discovered that everyone he knew had survived, including, to his relief, all the girls Kina.org supports.

The earthquake had damaged their villages, though. The girls had gone home to help their families, in villages where there were food and water shortages. It was pouring rain and people had no shelter. Many were falling sick. They still have no shelter in many of these places, even as I write.

Watching David as he tracked the news, conversing late at night on Skype with friends and partners who had just awakened in Nepal, I felt helpless. His heart was in Nepal, despite the canceled flight, but Nepal was rumored to be turning people away, denying visas. And as he and Eli kept talking with people about whether it was safe to come, it didn't feel safe for them to go at all. But as a few more days passed, the sense of danger eased. I hoped they would be able to get there soon.

Once the flight was booked, we talked about creating a Special Report on National Observer that would be a hub for news about Nepal. Part of Eli's job now that everything in Nepal had changed would be to report back what he was seeing. Eli will be there for two months, while David plans to stay only two weeks.

We know that soon, if not already, the news will move on from Nepal, one of the poorest countries in the world, while the story will continue to unfold.

David and Eli arrived in Kathmandu, after a 31 hour trip, and here's what David had to say...

"With mainly Nepali nationals and aid workers there were few tourists on the plane, allowing us to breeze through customs like I have never experienced on my previous 20 or so trips.

"Karma met us and quickly pulled us aside just as the usual throngs of people offering us rides into the city starting yelling out offers.

"With a bottle of water and a kata (Nepali scrarf), we were whisked off into the Kathmandu night, hurdling through the eerily empty dark streets towards our Guest House overlooking the Boudhanath Stupa.

"We had to walk in a few blocks to get to the hotel and were quickly surrounded by dogs barking into what was a quiet Kathmandu night, not a good omen for the quality of sleep to come, realizing that I had forgot my standard equipment for traveling to Nepal, ear plugs! As we got checked into our room and slid into bed it dawned on me that, up until that moment, it seem as it should be, nothing out of the ordinary - what earthquake?

"Eli and I got up after six hours of tossing and turning to the sweet choir of the dozen dogs four stories below… not a good start to the day. Dog-tired (sorry) we walked across the courtyard to the only coffee place open at 6:30 and had an expensive double espresso, cappuccino and croissants.

"Once a restaurant I was familiar with opened we had got a decent meal and waited for Karma to show up with a driver he had arranged to take us around to look at the impact of the earthquake in Kathmandu. Overall, it didn’t seem that bad, as it always looks a bit rangy changy. But as we drove through the city we started to see glimpses of the damage everywhere, piles of rubble, sagging roofs, buckled walls of older buildings along side the untouched newer concrete construction.

"As we entered an older part of the outer city there was serious damage visible everywhere. It looked like images from Syria of towns ravaged by military attacks, with buildings sheared off or totally collapsed into huge piles of rubble.

"Nepali police and international volunteer groups were helping dig out the rubble brick by brick, but it was mainly local home owners digging and trying to claim something, anything, out of piles of brick and wood that were once century old Newari traditional homes of carved wood and decorative brick work. In this neighborhood alone a couple hundred people died and were quickly cremated on the shore of the nearby river, a stones throw from the devastation.

"After the sobering view of the impact, we met up with Karma in the afternoon and planned out the next couple of days. Karma and his local NGO, The Small World, had started to go into areas that they normally don’t work to help those most impacted by the quake, where the government or aid groups haven't reached yet… in the middle hills north of Kathmandu.

"Our first effort is to head out in the morning to a village that Dawa from TSW had just came back from after hearing was in dire need of food, four hours north of Kathmandu, the village of Bhorle. All the homes in the town are flattened or extensively damaged. Thanks to donations from Kina, I was able to get enough rice/dahl/salt to supply 1200 people in the village for a week, hopefully help them until they are reached by the large INGO aid groups or the Nepali army. This is an overnight trip, we will camp out in a tent and distribute the food to the families on arrival. I also brought along a number or large tarps from Vancouver, but its not enough for a village so we will source more to provide shelter. The monsoon comes in a month.

"The trip begins from Kathmandu, heading north to Trisuli Bazar then through a town further north called Kalikastan - the village we are going to is a few hours beyond that."