The implications for Canada of a fast-tracked Trans-Pacific Partnership 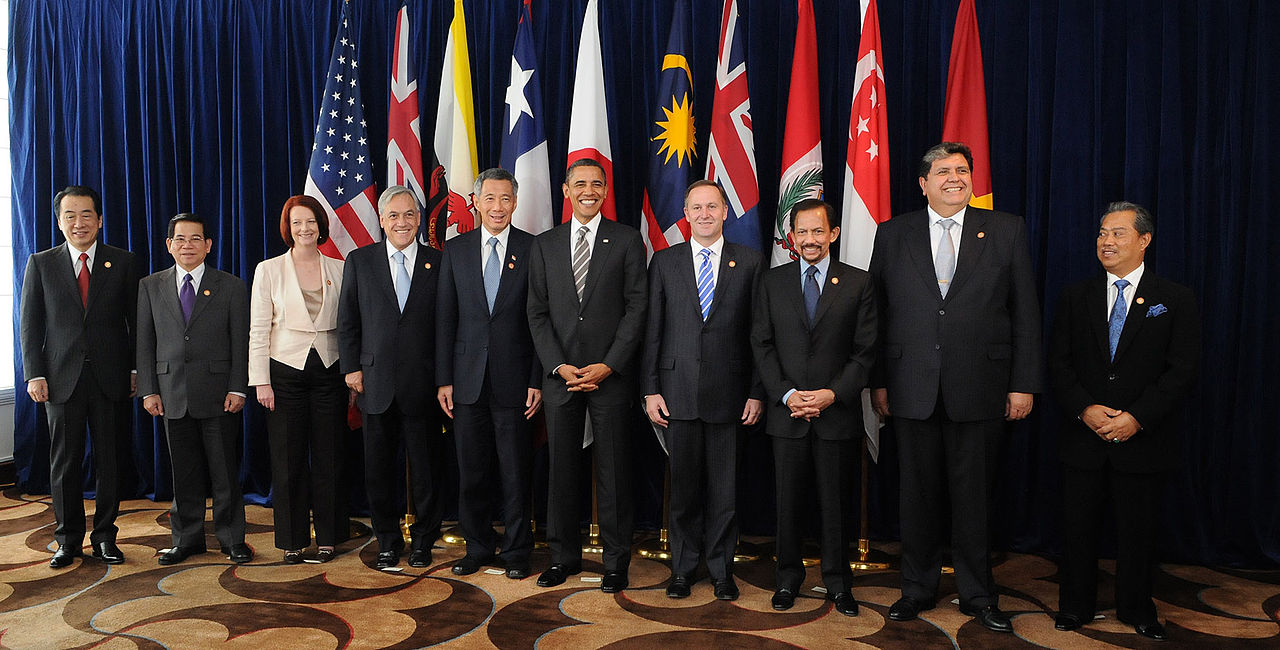 A summit with leaders of the member states of the Trans-Pacific Strategic Economic Partnership Agreement (TPP). Credit: Wikimedia
Previous story
Next story

As the Trans-Pacific Partnership (TPP) negotiations slouch toward an agreement, supporters have cranked the volume on their praise for what is sometimes called the “NAFTA of the Pacific.”

Critics, of which there are a growing number, prefer “NAFTA on steroids” – a sign the 12-country pact can only lead to more of the same deregulation, offshoring and rising inequality that are the legacy of 20 years of North American free trade.

A key vote in the U.S. House of Representatives, which could come within weeks, will decide if the TPP is soon sealed or the talks linger on. President Obama has inexplicably teamed up with his otherwise implacable Republican foes to champion trade promotion authority (aka fast-track), or the power to sideline Congress by forcing a yes or no vote on trade agreements in their entirety.

With only five of the TPP’s 30-plus chapters directly relating to trade, you can understand the reluctance of Democrats to give up their ability to review the deal and make changes.

Because of overwhelming opposition from the Democratic caucus and a handful of libertarian Republicans, the vote is still too close to call. But one thing is certain: if the fast-track bill passes, Canada will be mercilessly arm-twisted to make economically and socially harmful concessions.

Remember that Canada only joined the TPP talks in 2012. The federal government made the decision somewhat reluctantly and there were strings attached. One of them was that Canadian negotiators could not reopen any closed text. Canada’s bigger business lobbies even called it a defensive move to “secure” NAFTA supply chains rather than offering any meaningful market access elsewhere.

Predictably, the Canadian corporate community is now urging the government to do whatever is needed to make the TPP happen. Most Canadians have almost no idea what’s going on. (Wikileaks is raising a $100,000 reward for anyone who can leak them the full text, until now secret.) But people are starting to ask the obvious questions: what’s in it for us, and what will we have to give up to get it?

The answers are equally obvious if you look past the hype: not much, and quite a lot.

To begin with, Canada already has free trade deals in place with four TPP countries (the U.S., Mexico, Chile, and Peru). Tariffs on trade with the others (representing 3 per cent of imports and 5 per cent of exports) are very low. Canada has a trade deficit with these non-FTA countries of $5-8 billion annually; 80 per cent of Canada’s top exports to these countries are raw or semi-processed goods (e.g., beef, coal, lumber), while 85 per cent of imports are of higher value-added goods (e.g., autos, machinery, computer and electrical components).

We can therefore expect tariff removal through the TPP to worsen the erosion of the Canadian manufacturing sector and its well-paying jobs that has been underway since NAFTA.

Even pro-TPP studies actually predict almost no measurable change in GDP for the United States or Canada if the agreement is implemented. As many prominent economists, including Nobel prize winners Joseph Stiglitz and Paul Krugman, have argued, the trade impacts of TPP are far less important than the serious concerns it raises about excessive intellectual property rights, regulatory harmonization, and the perpetuation of a discredited investor-state dispute settlement (ISDS) regime. The impacts in Canada would be significant.

The TPP’s intellectual property rights chapter, for example, could be a minefield for efforts to control drug costs. To cement a pending free trade deal with the European Union (CETA), Canada has already agreed to patent term extensions that will add at least $800-million annually to Canadian drug costs, already the second highest in the world. Now, the TPP threatens to lock in patent linkage, looser patentability requirements (e.g. recognition of “me-too” drugs) and longer periods of data protection in ways that will further interfere with cost-saving reforms.

In the area of copyright, the TPP would require far longer terms of protection than what Canadians agreed to in a parliamentary copyright law review that only wrapped up recently. To smooth the way for the TPP, the federal government has already agreed, in the latest omnibus budget bill, to extend copyright terms for audio recordings from 50 to 70 years. The TPP could also require protection for controversial “digital locks,” which allow copyright holders to encrypt software in computerized devices and criminalize its circumvention.

The U.S. is also reportedly insisting on rules to prohibit countries from requiring that personal information be stored on national databases. The allure of cloud computing aside, there are good reasons why a country might require tax, health care or financial data to be stored locally. Treating all information as a kind of private commodity that companies could move when and where they like has considerable implications for privacy.

Leaked text confirms the TPP includes an investor-state dispute settlement (ISDS) mechanism modelled on NAFTA chapter 11. The process allows foreign investors to take their disputes with government decisions (policies, legislation, even the final rulings of the courts) to private arbitration. Canada is already the most-sued developed country in the world, absorbing more investor-state lawsuits under NAFTA’s ISDS process than even Mexico. We’ve lost seven cases and paid out damages of $190-million, as well as untold amounts in legal fees. There are eight active claims against Canada, with one of the most notorious involving a challenge to a ban on oil and gas fracking in the province of Quebec.

The TPP will significantly increase the number of foreign investors eligible to sue Canada. A recent Canadian NAFTA ISDS loss reflects the unfairness of the process. The arbitration tribunal ruled 2-1 that an independent environmental assessment process, which resulted in a U.S. investor (Bilcon) being denied a permit to dig a massive quarry in an ecologically sensitive region of Nova Scotia, violated NAFTA’s chapter 11 investor protections. The dissenting member on the NAFTA tribunal called this finding “a remarkable step backwards” for environmental protection. Bilcon is now seeking over $300 million in damages from the federal government.

One of the most difficult and high-profile issues for Canada in the TPP negotiations concerns the fate of its supply-managed agricultural sectors. Supply management matches domestic supply to domestic demand and in the process offers a fair return to farmers and a reasonably priced supply of fresh milk, eggs and poultry to consumers. Farmers and consumers in countries and sectors without supply management systems are subject to wild swings in commodity prices, and producers have little ability to negotiate reasonable returns or prices with giant global agribusinesses. Dairy farmers estimate their industry contributes more than $18-billion annually to the Canadian economy.

The Canadian government has been holding back on making an offer on market access for dairy until the last possible minute. But U.S. negotiators, as well those of Australia and New Zealand, have made it clear that they expect substantial access for all dairy products as well as for poultry, and reports from the recent TPP negotiations in Guam suggest Canada is willing to move in that direction. These inroads could spell the demise of the supply management system, destroying the livelihood of thousands of family farms, including in vote-rich Ontario and Quebec.

When we take an honest look at the TPP, it becomes clear there is little up­side for Canada in these negotiations. And yet here we are at the endgame, with Canada’s own take-it-or-leave-it decision on the horizon. In a fairly recent, but poorly reported speech, Prime Minister Stephen Harper stressed that Canada could not “hold up the TPP on its own,” even if it is unhappy with the results, and that Canadians must prepare themselves for some “difficult choices.”

It is uncertain how the Canadian public would respond to such a poor bargain at the polls. To date, the government has been tight-lipped about any aspect of the TPP negotiations, and traditionally the public plays no role in the passage of free trade deals. The federal government is probably as reluctant to have to make that decision in an election year as it was to enter into the TPP negotiations to begin with.

Despite the secrecy enveloping the TPP text, the Congressional fast-track bill is at least provoking a meaningful debate in the U.S. about this sweeping, yet economically dubious treaty. Canadians, who possibly have even more at stake, deserve no less.