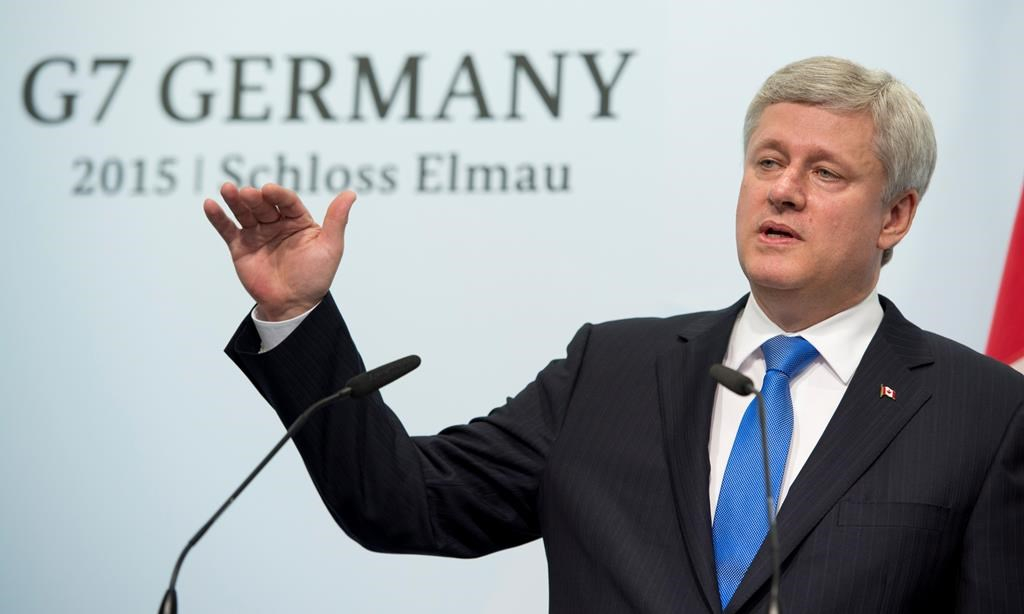 SCHLOSS ELMAU, Germany — Prime Minister Stephen Harper expanded at length Monday on why he feels such antipathy towards Russian President Vladimir Putin and why he wanted Russia kicked out of the old G8 even before it breached Ukraine's borders.

Harper said he doesn't want Putin back because he simply doesn't share the values of the group, which he added is doing well in its new form after completing a second summit without the mercurial Russian leader.

Harper also commended the G7 leaders' statement on the Russia-Ukraine crisis as strong, praising its commitment to keep sanctions on Russia in place and "to escalating those sanctions if necessary."

During Monday's conclusion of the G7 summit in Germany, Harper expanded on his reasoning behind the hardline position he has taken with Putin. Harper has refused to engage with Putin, unlike many of his fellow leaders, who do so in search of a diplomatic solution to the ongoing hostilities.

"I came of the view, some time before the invasion of Ukraine, that his presence at the table of the G7 was not productive — in fact was inhibiting the kinds of discussions, the kinds of co-operation we could be having on a broad range of international issues," Harper said.

"Even though Russia may objectively share security interests with us in the West, Mr. Putin makes it his business to just deliberately be troublesome — to throw a spanner in the works wherever he can.

"And of course, the final outrage was actually trying to erase boundaries by force in Ukraine."

Harper, making his final appearance at a major international summit before the expected Oct. 19 federal election, also shed light on how he has come to view the multilateral system.

Harper said there was great hope in the 1990s that when Russia was admitted to what was then the G7-plus-one, its exposure to the other members would help it grow democratically and economically — and adopt the G7's values.

Instead, Harper said Putin has dashed the hopes of his citizens, who want changes, while he has concentrated power in the hands of a few rich oligarchs.

"The G7 is not the United Nations. The G7 is not even the G20 — the G7 is a group of countries who share fundamental values and objectives in the world," Harper said.

"We also share similar values — deep, progressive and aggressive commitments towards democracy, freedom, human rights and the rule of law — and of course we share security interests. We are all committed to each others' collective security.

Harper's debut on the international stage came at the G8 summit hosted by Putin in St. Petersburg in 2006.

"We believe that the Russian people, especially the younger generations, want the kind of free and democratic life that we have in the West," said Harper.

"None of these things have happened. Mr. Putin used the rise in oil prices to create a very different type of economy, dominated by oligarchs and criminal syndicates."

Under Putin, Harper said, Russia has seen "a steady and unmistakable erosion of every single norm of democratic life and human rights under his rule."

U.S. President Barack Obama used his G7 news conference to level some harsh personal criticism at Putin, saying he has to decide whether he wants to continue damaging Russia's economy "in pursuit of a wrong-headed desire to recreate the glories of the Soviet empire."