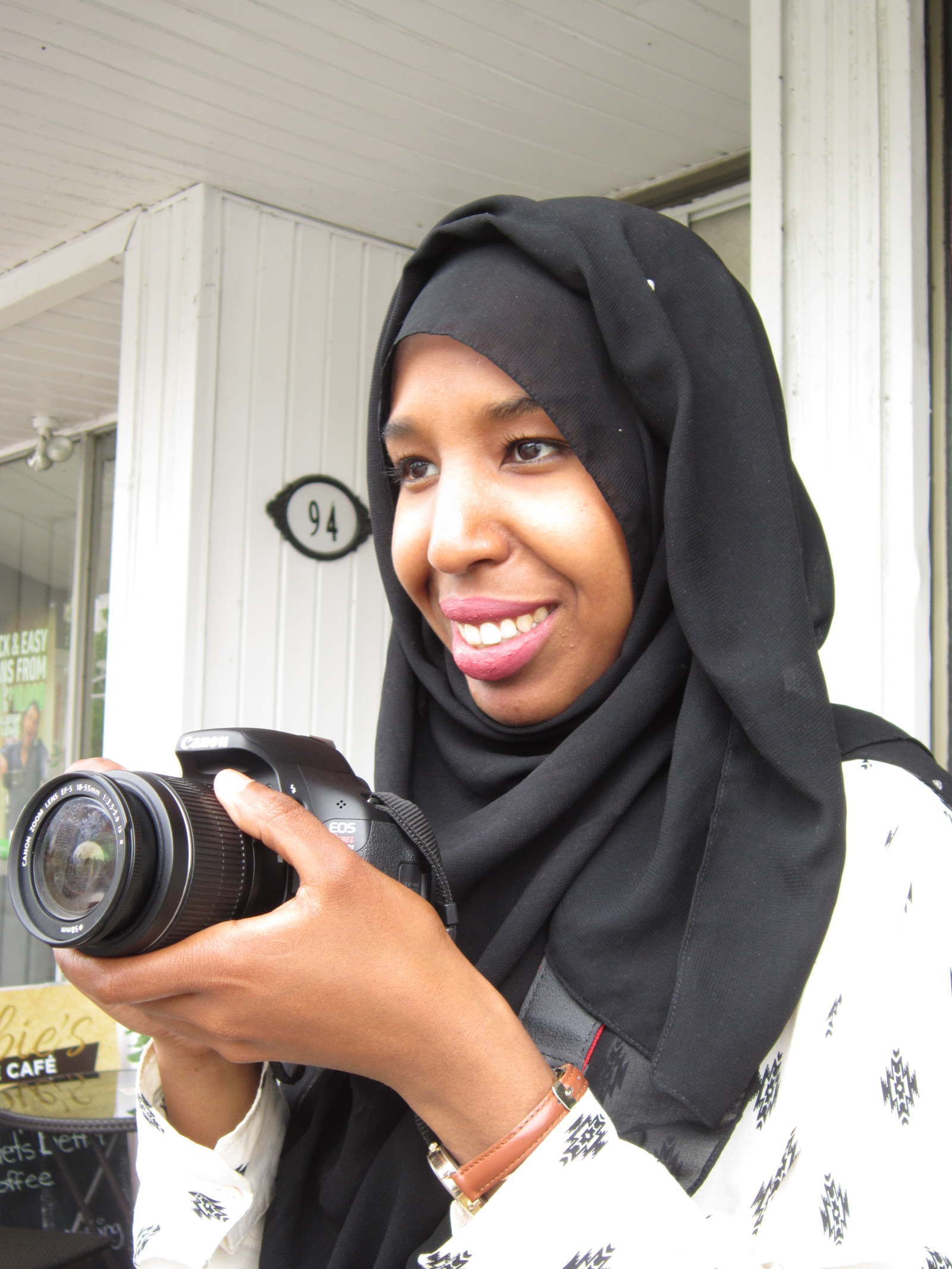 Umulkhaire Abdallah adjusts settings on her camera in Ajax on June 8, one day before the Senate vote.
Previous story
Next story

An avid filmmaker exploring the Islamic community’s response to Bill C-51 through an upcoming documentary says the Islamic community has not taken a more vocal stance on Bill C-51 because of the fear and the stigma associated with being a Muslim. Anyone who might try to oppose the government’s proposed legislation would likely be labelled an extremist, or at least they fear that this will be the case, Umulkhaire Abdallah says.

Abdallah sought to understand why Canadian Muslims have not taken a more active stance over the government’s controversial proposed legislation, which is being voted on by the Senate on June 9, through her upcoming documentary titled Bill C-51 – Behind Closed Eyes That See.

“It not only gives Muslims a platform to speak, it also gives the government an understanding that the Muslim community isn’t so segregated from them, that maybe the government and the community can work together to combat radicalism, rather than working separately and targeting the Islamic community,” said Abdallah, who hopes to have her documentary finished by mid-July.

“We know the Muslim community actually opposes it. So [Bill C-51 – Behind Closed Eyes That See is meant] to really get their perspective without feeling persecuted and without feeling fear, because they feel not only marginalized but actually a little bit discriminated against. The bill is targeting terrorism specifically and terrorism and Islamic faith [is] something that has been completely coinciding in the media and go hand-in-hand unfortunately,” said Abdallah.

Nonetheless, Abdallah said that her experience as a Canadian Muslim was mostly positive, enjoying support and admiration from others for practicing her faith since she donned the hijab at age 22.

She said that Muslim women like herself chose to wear hijab, or in other cases more extensive garments such as the niqab, as they were dressing for God instead of society.

“If you feel as though you have a closer relationship with God you will cover yourself more,” said Abdallah.

While she has experienced some Islamophobia, she nonetheless sees Canada as her home and the country that best reflects who she is, focusing on the positive aspects of her life here.

“You get a bit of both. You don’t really focus too much on the negatives,” said Abdallah, who has also lived in Ottawa and Alberta.

Abdallah began her documentary as a project for her broadcasting for contemporary media course at Durham College, close to where she lives in Ajax, Ontario. Since an early age she has been fascinated by filmmaking and media arts, but despite previously wearing hijab for a time when she was 14, she has not always been an observant Muslim.

“There was a point in my life when I wasn’t practicing and I’m still in the arts and media and that sort of thing, and now that I am practicing I have to find a Halal, which is a non-sinful permitted way to express my artistic craft, and I’m also an activist,” said Abdallah.

Abdallah began a group called "United for Peace," worked as a volunteer with Amnesty International at her school, as well as on the Free Omar Khadr Committee, and she also does charity work such as sending clothing to Syrian war refugees in Lebanon and Turkey.

One prominent Muslim who is taking the lead in representing the Islamic community as the Senate vote on Bill C-51 looms is Farheen Khan, the federal NDP’s candidate for Mississauga-Centre in the Oct. 19 election, who was also interviewed by Abdallah after the May 30 protest against the proposed legislation in downtown Toronto.

She helped organize a Day of Action protest against the proposed bill in downtown Mississauga in March, to which 400 people showed up, an unprecedented response in Khan’s view.

“All Canadians have started to realize that this is bigger than just one community,” said Khan, adding that Bill C-51 could potentially target not only Muslims, but also other immigrant and faith communities, First Nations, labour unions, and human rights activists.

While she said that some in the Muslim community are reluctant to speak up, fearing guilt by association, she said that Bill C-51 overrode the Canadian Charter of Rights and Freedoms that formed a fundamental part of Canada’s national identity.

“Work with us to take the Harper Conservatives out of government so we can repeal this bill,” said Khan.