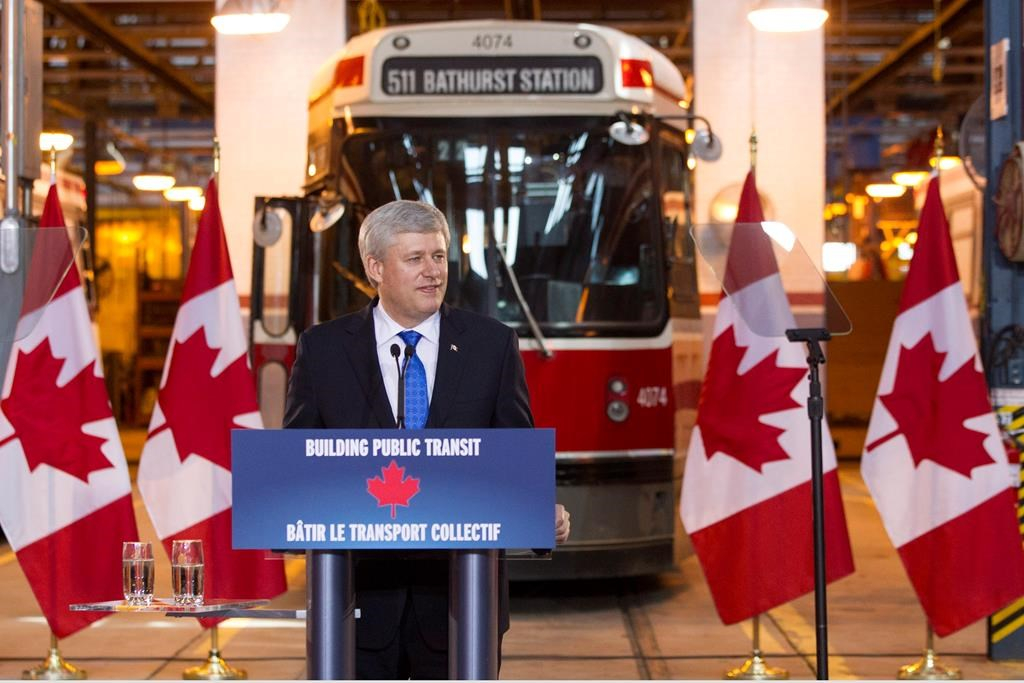 TORONTO — Conservative Prime Minister Stephen Harper rode a delayed regional train into a gridlocked but vote-rich Toronto on Thursday to tout his government's support for urban infrastructure and public transit — traditionally the realm of the New Democrats.

Days after NDP Leader Tom Mulcair spoke in the city about his plan to fund transit with gas-tax money, Harper talked up his government's track record, rhyming off several projects it has helped finance.

"Our government's infrastructure investments have been without precedent in this country," Harper said at a Toronto Transit Commission depot.

"We are committing $80 billion to infrastructure investments over the next decade."

With a nod to the fall federal election, the prime minister took jabs at Mulcair and Liberal Leader Justin Trudeau, painting them as being of a tax-and-spend persuasion that will hurt the country's economy.

The other parties, he said, are promising large infrastructure spending without explaining how they would pay for it.

"The fact is they have only two options: higher deficits or higher taxes or both," Harper said. "We will do neither."

The prime minister and Mayor John Tory had earlier arrived in Toronto for a photo op aboard a GO Transit regional commuter train that had been delayed by a car accident on the line. Later, as Tory looked on, Harper expressed approval for the mayor's public-transit plan known as SmartTrack.

The federal government, Harper said, would pony up one-third of the close to $7.8-billion cost of the plan to improve local and regional transit. The money would come from a new permanent public transit fund worth $1 billion annually announced in the government's recent budget.

"Bottom line: It will mean faster commutes for hundreds of thousands of people and in that, our government is very proud to be a partner."

Tory could barely contain his glee at the high-level backing for his plan, calling it a great day for the city and region.

For the first time, he said, a federal government had committed predictable and stable funding for infrastructure — long a demand from municipalities across the country.

"I am more confident than ever the people of this city will get the relief they need," Tory said.

"It was my intention to see that the city of Toronto would be the first to submit an application (under the new fund) and he's invited me to do that today, and I'd like to joke that I have it in my pocket, which I don't."

City council has yet to approve the SmartTrack plan and apply for matching infrastructure funds from the province and federal government.

When asked about the possibility of council changing its mind on the plan, Harper said the fact that the federal government is prepared to commit a significant amount of money toward it gives him an "optimistic view" of the project.