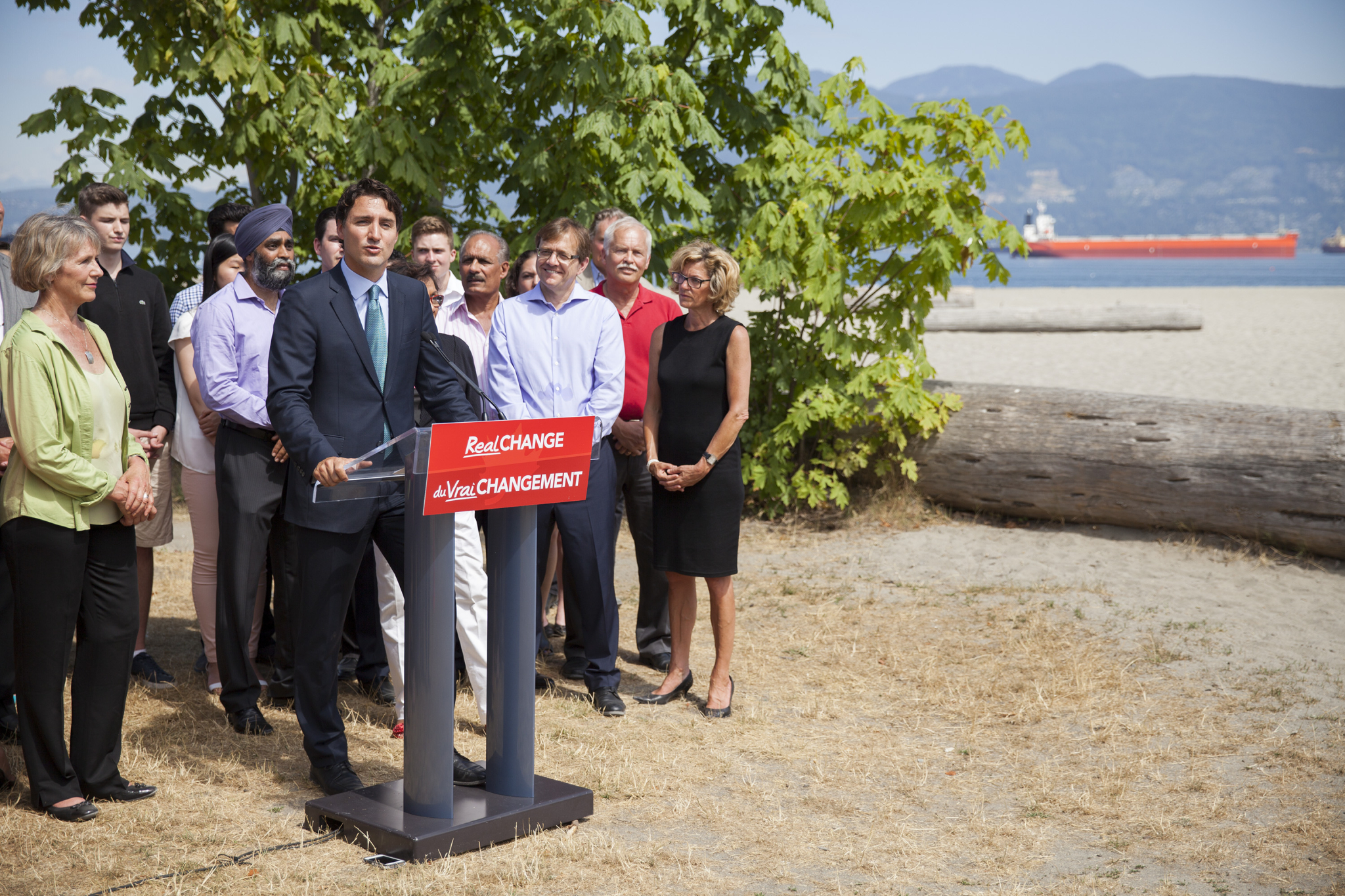 Federal leader Justin Trudeau suggested today that his party would not determine Canada's emissions reduction target until well after a U.N. climate summit in Paris, where the world will meet to tackle dangerously rising greenhouse gases.

“We need to take real action on climate change. It’s time Canada put a price on carbon pollution,” said Trudeau at a Vancouver beach press conference at which he launched the Liberal's environmental platform.

"We’ll work with the provinces in the first 90 days of taking office to establish a framework for reducing Canada’s collective carbon footprint,” he said.

The federal election is expected to be Oct. 19, and the U.N. Paris meeting starts Nov. 30.

So, 90 days from the election means Canada may not have an emissions target until January 2016 —well after the ink on a global climate agreement has dried.

"Trudeau has made it very clear that under the Liberals, Canada would go to Paris empty-handed with no target to contribute to the global fight against climate change," reacted NDP MP Malcolm Allen, the party's deputy critic of natural resources, near Niagara Falls, ON.

That's not leadership, and it's going make Canada a global climate laggard yet again.”

The 90-day timeline Mr. Trudeau pledged verbally Monday is different than the Liberal environment and economy policy document that he held up in front of reporters. It states:

"Within 90 days of the conference, a First Ministers meeting will be held to work together on a framework to combat climate change," it states.

So, does Trudeau mean ninety days after taking office, or 90 days after the Paris summit?

"Our commitment is to hold a meeting with the provinces 90 days after the Paris summit," Trudeau's spokesperson Cameron Ahmad clarified late Monday. "This is a commitment that Mr. Trudeau made in February in Calgary."

If that is the case, then the time frame for establishing Canada's climate change target will be put off until as late as March 2016.

Canada’s submission to UN summit: "blank, or ‘we’ll get back to you'"

How Trudeau would negotiate a global warming treaty in late November, without knowing Canada’s emissions reduction target until January or March, remains a mystery to critics.

“Canada will be negotiating with other countries about what it will do and what they will do, and that will be written into a Paris agreement. And Canada’s submission will either be blank, or ‘we’ll get back to you,'” said Environmental Defence's national program manager Dale Marshall in Ottawa.

Green Party candidate Lynne Quarmby —a Simon Fraser University biochemist — said the confusion about when Trudeau would set a climate target reflects “a lack of serious engagement on the climate issue.”

“I just throw my hands in the air and wonder how we’re going to negotiate. I long for Canada to be a leader in these negotiations, and if we don’t even show up with a clear idea of our own target, it’s hard to imagine how we can possibly play a leadership role,” said Quarmby.

The Paris summit —also known as COP21 —"will be a crucial conference, as it needs to achieve a new international agreement on the climate, applicable to all countries, with the aim of keeping global warming below 2° Celsius," states the U.N. website. NASA confirmed in January that 2014 was the hottest global temperature year on modern record.

The Liberals are the only major federal party without a Canada-wide target for reducing emissions going to the election.

Trudeau said Liberals favour setting a national standard that gives provinces and territories the flexibility to establish their own carbon pricing policies. He applauded B.C.'s carbon tax, as well as cap and trade plans in Ontario and Quebec.

"Let's be honest, targets aren't enough," said Trudeau in February to the Calgary Petroleum Club. "We need effective policies to be put in place, so we can meet them."

Stephen Harper's Conservatives meanwhile have called for “sector by sector” regulation of emissions —to punish gas flaring and coal operations, for example. But notably the party would not want to touch emissions from the oil sands, and has long opposed carbon taxes.

“Anybody who tells you that a carbon tax is an environmental policy is trying to pull the wool over your eyes,” Stephen Harper said in April.

Thomas Mulcair's NDP wants a Canada-wide “cap and trade” system, where Ottawa would set a national cap on emissions that would go down each year, and leave it to industry to trade pollution permits, thereby establishing a market price for carbon.

And Elizabeth May's Greens favour a “fee-and-dividend” approach, where a fee is charged at the pollution point of origin, and the fee is steadily increased over the years. The fees would go into a trust fund, and returned to taxpayers in full.

"Everyone here in B.C. knows that the Great Bear Rainforest is not the place for an oil pipeline.”

But on Kinder Morgan' Trans Mountain pipeline expansion project —that would twin a pipeline from Edmonton to Burnaby —he said not much further about his statement last year “hoping” for its approval.

In the Metro Calgary newspaper in 2014, he said:

"I certainly hope that we’re going to be able to get that pipeline approved. And I hope that Kinder Morgan learns from Enbridge’s experience of short-cutting or going too light on community buy-in."

When asked by the National Observer to clarify on Monday, Trudeau skirted the Kinder Morgan project, and said:

“Make no mistake about it —Canada needs to get its resources to market. But we need to do that in a way that actually respects the long term interests of Canadians and of our future. Even though [it is] governments that grant permits, ultimately it’s only communities that grant permission.”

"Let me be clear: I support Keystone XL because, having examined the facts, and accepting the judgment of the National Energy Board, I believe it is in the national interest.”

"Keep an open mind: you can find friends in the most unexpected places."