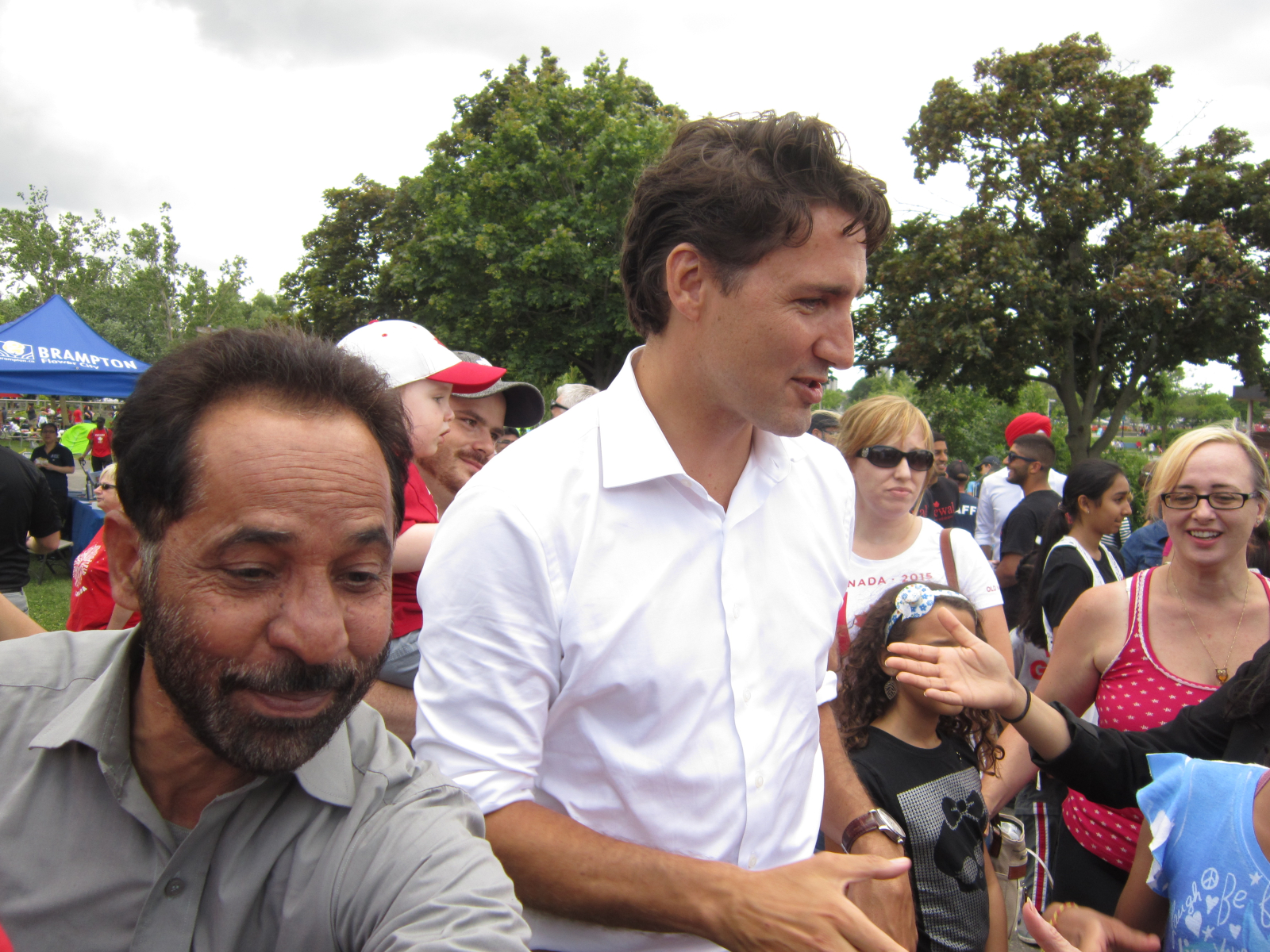 Justin Trudeau in Brampton's Chinguacousy Park on July 1 2015.
Previous story
Liberal Leader Justin Trudeau made a whistle-stop tour of former Liberal strongholds in the Greater Toronto Area (GTA) to meet would-be voters and give a boost to local party candidates running in the Oct. 19 elections.

Trudeau’s visit to Mississauga and Brampton comes at a time when the NDP are leading in the polls at 32.4 per cent, while the Conservatives are second at 28.9 per cent, and the Grits trail at just 27.4 per cent according to ThreeHundredEight’s latest results, but the Grit leader remained optimistic.

“I’m getting out to meet with as many people as possible, because if you want to be a good representative and a good leader for this country you have to be connected with people and that’s exactly what I’m doing. I’m not spending a lot of time worrying about [Harper or Mulcair]. They spend their time focusing on me, I spend my time focusing on Canadians and that’s what works for me,” said Trudeau while meeting with people in Brampton’s Chinguacousy Park.

Trudeau’s Brampton walkabout was one of several he attended in the GTA, starting with a volunteer appreciation gathering at the office of Grit candidate Sven Spengemann who is running in the newly-created riding of Mississauga Lakeshore. He also attended a Canada Day parade in Port Credit, before meeting the public in Brampton and moving on to Guelph and the University of Waterloo for more celebrations.

While GTA satellite cities such as Brampton and Mississauga have historically voted Liberal, these old fortresses were stormed by the Tories in 2011 and all the Brampton ridings turned blue, including Brampton West and Brampton Springdale, as well as Bramalea-Gore-Malton and Mississauga-Brampton South, which both extend into Mississauga.

Trudeau’s only victory in this area came when former Tory MP Eve Adams, who represents Mississauga-Brampton South, defected to the Grits back in February.

Four years on, with the NDP riding high in the polls less than four months to go before Oct. 19, an orange wave that unexpectedly swept Quebec in 2011 may yet wash away Tory and Grit alike from their GTA strongholds.

Farheen Khan, who is running in the newly-created Mississauga Centre riding, is aiming to do just that, by campaigning not only on hot-button issues such as C-51 and erosion of civil liberties, but also more everyday concerns such as the rising cost of living and poor wages.

To combat this, Khan is promoting ideas such as a $15 minimum wage to help Canada’s working poor alongside greater support for Canada Post, which has suffered cutbacks under the Harper government, such as the ending of home delivery services for 74,000 addresses in 10 communities last year.

According to Khan, the gap between Trudeau’s and Harper’s parties was too small in the eyes of many Mississaugans, saying that even many traditional Tory voters were disillusioned with Harper and felt that Mulcair was the best choice for Canada’s next prime minister.

“There’s too much scandal, secrecy, and control from the Conservatives. People are definitely considering the NDP as a real option at this point,” said Khan.

She said that Canadians were tired of the same political choices and described her own party as one of integrity that consistently spoke out on issues such as C-51.

“The NDP is no longer a party. It’s a movement for change in Canada,” said Khan.

But the movement has yet to gain traction in Mississauga even as the NDP leads in national polls, as the latest riding figures from ThreeHundredEight show Khan’s party trailing in third place at 21.9 per cent in Mississauga Centre, compared to 30 per cent favouring the Tories and 44.2 per cent choosing the Grits. This gives Omar Alghabra, a former Liberal MP and Khan’s rival, a real chance of returning to Ottawa this fall.

Liberal candidate Raj Grewal, who is running in the newly-created riding of Brampton East and joined Trudeau on his Canada Day walkabout in Chinguacousy Park, is also optimistic that he can turn his neighbourhood red once more in October.

“It’s one house at a time, one vote at a time,” said Grewal. “We’ve seen 10 years of the Harper decade, but Canadians are tired of it, it’s the politics of fear and division but we’re planning on hope and hard work and really building the country back.”

One key plank of Grewal’s plan for rebuilding Canada is immigration policy reform including family reunification, as well as repealing the Harper government’s recently-passed Bill C-24, which allows dual nationals and those eligible to obtain another nationality to be stripped of their Canadian citizenship without any oversight by a judge.

He is also promoting middle-class interests by proposing a seven per cent reduction in the middle tax bracket, as well as addressing the rising costs of post-secondary education that are squeezing many family budgets.

For those families with less than $140,000 in annual income, Grewal said the Grits would introduce a Canada Child Benefit, allowing children under 18 to receive “a significant tax subsidy.”

“Our plan for fairness is really investing in Canada’s middle class ensuring that every Canadian family has an opportunity to make it,” said Grewal.

But the polls indicate that Grewal’s position is weaker than Alghabra’s, as ThreeHundredEight’s riding figures show that the NDP are currently leading in his riding at 42.2 per cent, while 36 per cent favour the Liberals, and just 18.6 per cent of people would vote Conservative. 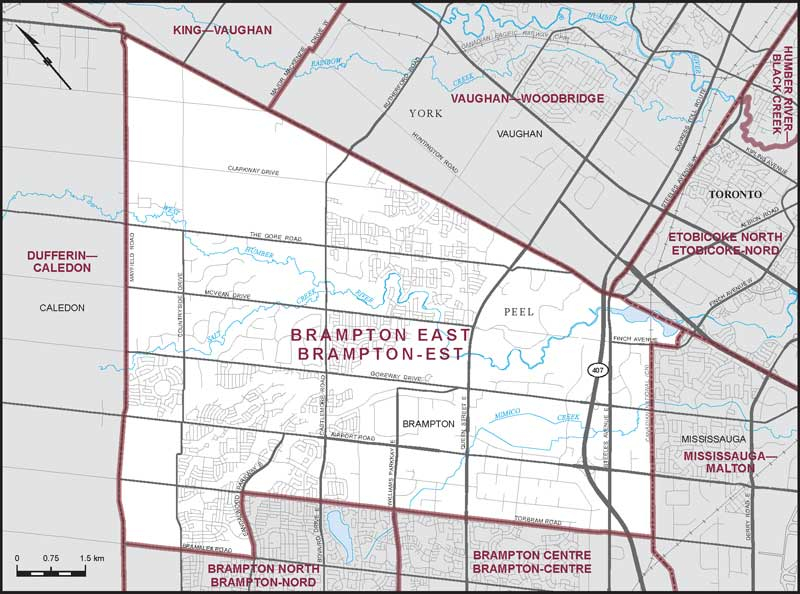