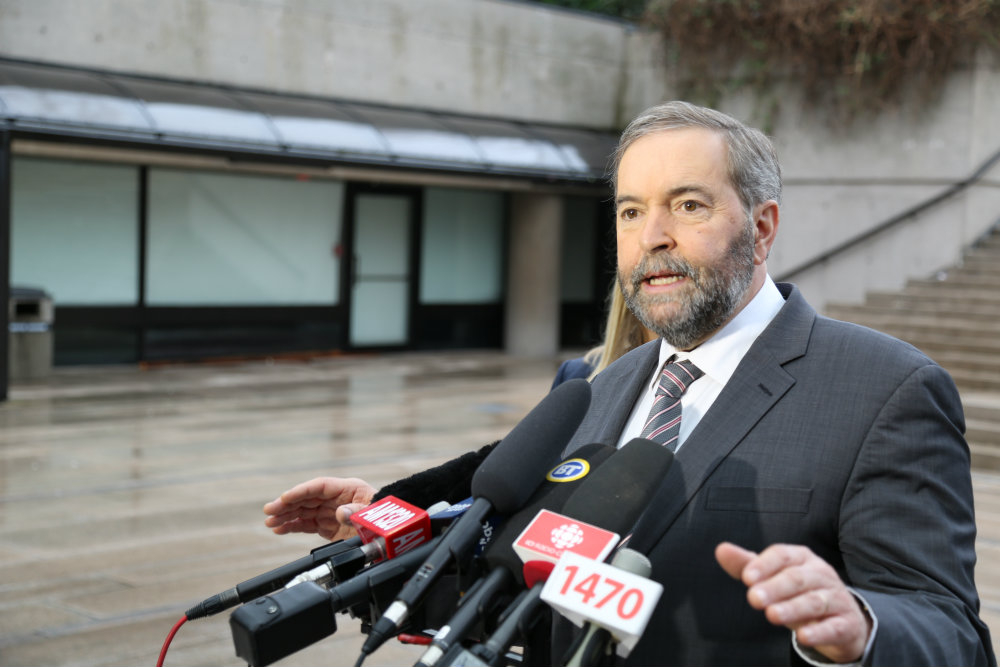 NDP leader Thomas Mulcair gave a nuanced view onthe proposed Energy East pipeline debate while responding to reporters' questions in downtown Vancouver on Thursday. Asked about his thoughts on the controversial project, Mulcair didn't state whether he was opposed to or in favour of the project, but said it was difficult to approve given the lack of current lack of "thorough, reliable, and credible" environmental assessments under Prime Minister Stephen Harper.

"It’s very similar to the Kinder Morgan example here in BC. You can’t get to yes on any of these projects right now because there is no longer a thorough, reliable, credible environmental assessment process in Canada," he said. "Stephen Harper’s approach has been: let’s scrap environmental laws, whether it’s the Navigable Waters Protection Act, the Species At Risk Act, the Fisheries Act, and then things will go faster." Although the NDP leader suggested in November that Energy East was the most viable of the pipeline projects, he said he did not think it was necessarily a good investment.

"What we have said is that as a matter of sustainable development, we should try first and foremost to add value to our own natural resources here and as long as you are following upstream, basic rules of sustainable development, like polluter-pay, like internalizing the costs, including the carbon costs, which we’re not doing right now in the oil sands as you know," he said.

He said it would be a "better principle" to upgrade raw bitumen in Canada, rather than exporting it straight to the U.S. "That represents export of 40,000 jobs. So as a matter of principle, it’s always better to add value to your own natural resources here," he said. TransCanada's 4,600-kilometre Energy East pipeline could carry 1.1 million barrels of crude oil per day across six provinces from the Alberta oil sands to refineries in Eastern Canada.

In recent weeks, The Energy East pipeline has become a major election issue in the province of Quebec, where opposition to it is mounting.

Gabriel Nadeau-Dubois, who in 2012 helped galvanize student opposition in Quebec to a proposed rise in tuition — a movement dubbed by many as the “Maple Spring” — is now using his name recognition to fight TransCanada’s Energy East pipeline. The prominent former student leader has already raised over $400,000 in a crowdfunding campaign to fight the project. Nadeau-Dubois believes he can use the upcoming election to pressure the NDP and the Liberals to oppose the pipeline. "There are 78 federal ridings in Quebec," Nadeau-Dubois said in a Canadian Press report. "If they want these ridings, they are going to have a position that reflects the opinions on the ground.” NDP MP Jinny Sims, who was at a Wednesday night rally at the Fairmont Hotel, believes a broader discussion needs to occur regarding the Energy East pipeline. "We are not so naive to think we can leave our resources in the ground forever,” she said.

"It’s about sustainable development and growing the jobs that come from these resources.” The idea for the Energy East pipeline surfaced in 2011, after Prime Minister Stephen Harper was notified by President Obama that the Keystone XL pipeline would be put on hold. The pipeline was to bring oil sands from Alberta through the U.S. to refineries in the Gulf of Mexico. A fierce resistance by farmers in Nebraska helped bog down the Keystone XL process. Rural landowners argued they didn't want the pipeline running through their fields or over their water sources. Soon after President Obama’s remarks, Harper signified to a British business audience that it was time for “a real shift in the mind set of Canadian business culture,” which Energy East best represented.

Correction March 26, 7:30 a.m.: in a previous version of the story, the headline read: "Mulcair hints at conditional support for Energy East." This has been modified, and additional quotes have been inserted.