Chantal Stormsong Chagnon: Out of the frying pan and into the 8th Fire

By Carrie Saxifrage | News | July 11th 2015
#2 of 15 articles from the Special Report: The Climate Innovator Next Door 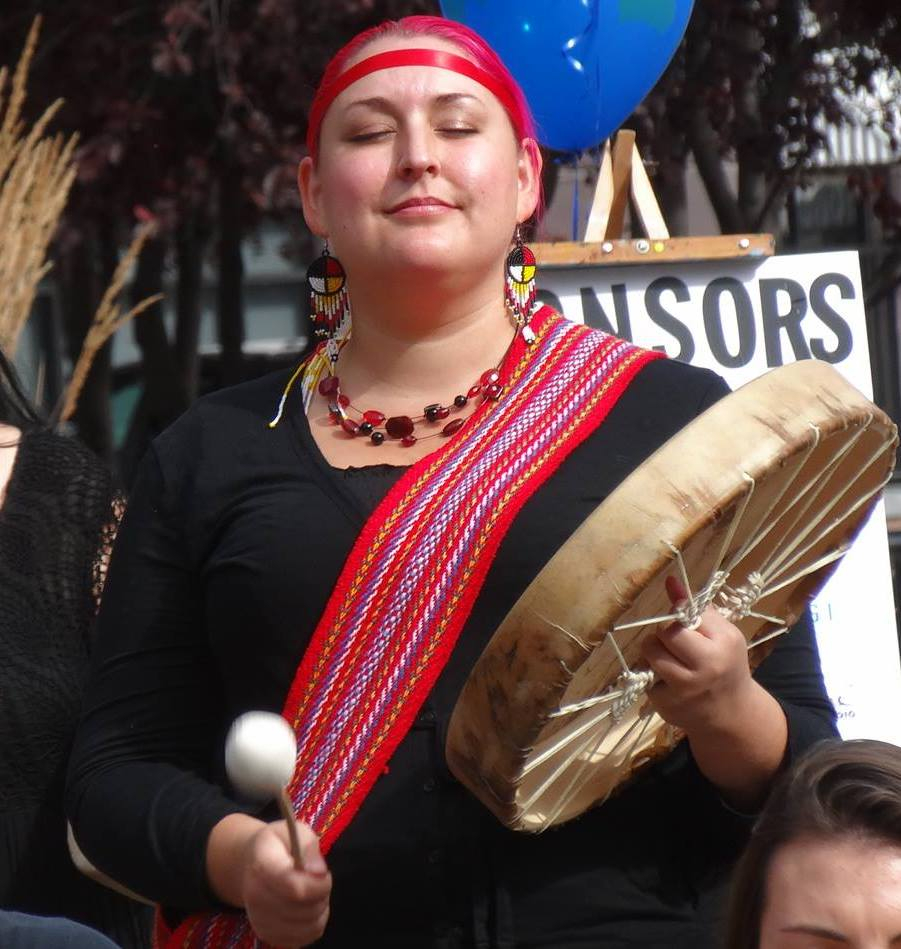 Chantal Stormsong Chagnon sings and drums to help heal Canada’s brutal colonial past. “Colonialism is part of Canada,” she said. “If you are not aware of it, you are willfully blind to what is going on.” Yet her approach is inclusive. When I asked her how she welcomes in people of different perspectives, she answered, “Hugs.”

In early April, a crowd of about sixty came together in front of Calgary City Hall to protest and mourn the “not guilty” verdict of the man who inflicted wounds that killed Cindy Gladue.

As she sang the words, “The sky is now open,” popped into my head. But I couldn’t explain what they meant, even to myself.

After the protest, we found a small Chinese buffet restaurant. Chantal chatted with the waitresses until they disappeared to refill the warming plates, just for us. Chantal’s warmth does that. She’s in her mid-thirties, of Cree descent. She presents traditional First Nations culture to schools, universities and other public forums, with some politics thrown in. Many of her stories speak to personal resilience.

“I’ve been sharing about the Thunderbird in schools this week,” she told me as we settled down to eat. “The Thunderbird leads us. When we aren’t listening to our intuition or guides, bad stuff happens to put us back on our path so we don’t stay miserable.

"You can see it as an opportunity to move forward in a stronger way. The school kids weren’t getting it so I told them about when I was hit by a truck three years ago. Before that, my plan was to open a day home because I love kids.

"But the Creator had bigger plans for me. After being down for a month, I was thrust into a position where I needed to start sharing the traditional ways. When Idle No More took hold, I was ready. I organized events, got the media to come out and built relationships with the police.”

Chantal used this same resilience when she created the 8th Fire conference in Calgary last March. It was supposed to be a Green Party convention but when the party pulled out, she turned it into an event that highlighted an ancient Anishinaabe prophecy of walking through the 7th fire into the 8th:

They will come to a fork in the road. One road will lead to Materialsm and Destruction…. For almost all living creatures…. The other road will lead to a Spiritual Way upon which the Native People will be standing. This path will lead to the lighting of the 8th fire, a period of eternal peace, harmony and a “New Earth” where the destruction of the past will be healed.

“I don’t think the crossroads is that far into the future,” Chantal said. “I think we have about a decade before we go, ‘Oh shoot, we had the most fresh water on the planet and we polluted it with fracking and oil sands extraction.’ The fossil fuel industry makes water unusable, at a time when climate change is bringing us drought.”

At the 8th Fire Gathering, hundreds of people came to the University of Calgary to hear indigenous leaders speak on subjects such as fracking, the tar sands, traditional life styles, health, and ceremony.

“I created the event to help people become aware that they can choose a spiritual way over materialism and destruction,” Chantal explained. “We don’t have to let businesses run out the environment to the extent that they do. Businesses don’t care that people have to struggle to get drinking water. They just bring in bottled water, which is intervening even more in the situation.”

Chantal believes the land is sick because we don’t give back to it. “We’re just taking and taking and taking,” she told me. “Even when I go sage picking or grass picking I bring tobacco with me and lay it down to say, ‘Thank you, Mother Earth for your bounty and thank you, Creator for the blessings received.’”

A beautiful blue flame: the traditional purpose of bitumen

When I asked Chantal whether the tar sands affect her territory, she described bitumen from a traditional perspective. “We have the bitumen up north because it is fricking cold up there,” she said.

“Bitumen nurtures the soil. Unique species, plants and micro-organisms thrive on it. Traditionally, when we’d go into the land out there it was very cold so we would roll some bitumen into a ball and light it with a flint. It would burn all night with a beautiful blue flame.

"It was gorgeous. That was its purpose.”

There’s no fossil fuel infrastructure planned for Chantal’s traditional territory, and she emphasizes the problems faced of other First Nations.

“When I perform at rallies, I bring together people who are struggling on the same issues, like fracking,” she told me. “I facilitated a tour by my friend Suzanne Patles so she could speak to people about the Mi’kmaq fracking blockade.” (In February, the Mi’kmaq blockade of shale gas exploration on their traditional territory by a Houston-based company became violent.)

Chantal brought together Patles and Lori Brave Rock, who advocates a moratorium on fracking across southern Alberta for a panel discussion.

“The problem is that companies develop projects without First Nations consultation,” Chantal explained. “By the time rights get asserted and the courts say they shouldn’t develop, its already been done. By sharing stories, we can get ahead of the game.”

“Everyone is fighting for the same goal,” Chantal said, “to protect their land.”

I asked Chantal how oil and gas infrastructure issues are related to the other challenges facing First Nations. “Governmental structures and the system of colonialism caused our problems,” she said. “The government decided to put people where they couldn’t move. If you can’t follow the seasons, the game or the water, that destroys a certain part of what aboriginal life is about.”

Chantal sees ceremony as important both to First Nations and to settler communities. “One problem is that our society doesn’t realize that we need healing – mentally, emotionally, spiritually, physically,” she said. “That’s why we put so much emotion into our events. Yes, we are trying to connect with people’s minds to educate them, but you can only do that when their hearts and spirits are open.”

“I do what I do for the next generation,” Chantal concluded. “I look at my two sons and I can’t give up.”