By Carrie Saxifrage | News, Culture | July 12th 2015
#3 of 15 articles from the Special Report: The Climate Innovator Next Door 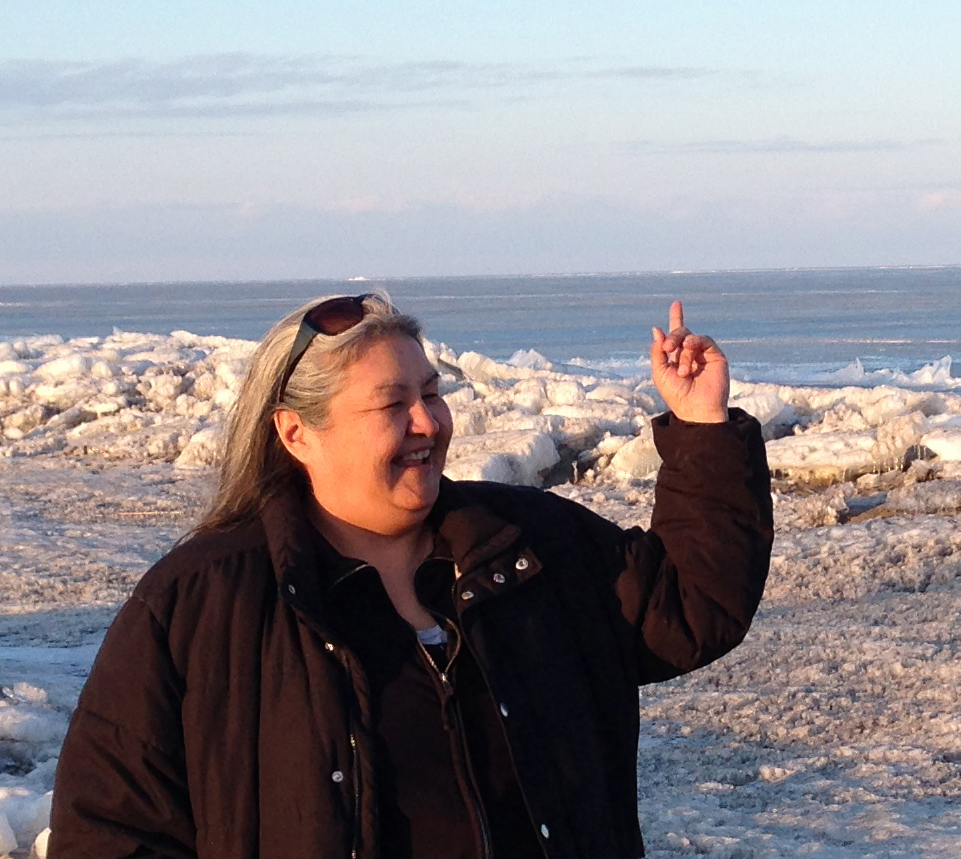 Chickadee Richard, Anishinaabe Elder and Idle No More spokeswoman in a photograph by Carrie Saxifrage
Previous story
Next story

Chickadee Richard (pronounced ree-shard) is an Anishinaabe elder of the Bear Clan who has served on the board of the Indigenous Environmental Network, and as a spokeswoman for Idle No More (“Not that I was ever idle,” she jokes). She works to support people who are protecting their traditional territories from unwanted fossil fuel infrastructure.

On Easter Day, two activists drove me a couple of hours north of Winnipeg to the reserve where Chickadee Richard—her traditional name is Thundering Rain Woman—grew up.

We met Chickadee in the only store in Amaranth. New to the protocol of speaking with First Nations elders, I felt clumsy presenting her with Drum tobacco wrapped in a new, red dish towel while standing in an aisle full of soap products.

She accepted the gift with a kind smile and then offered to show us where she grew up, along the shores of Lake Manitoba. We got out of the car beside a large, frozen lake.

“This is my lake,” Chickadee shouted over the howling wind. “I ran free here.” She pointed toward a cabin where her grandparents had “mostly” raised her because her mother had been to residential school. Chickadee’s waist-length salt-and-pepper hair whipped across her face as we walked along a dirt road talking, but it was very cold and we continued our conversation in the car, out of the wind.

"Now we have to un-believe some of those belief systems because they separate us. They weaken us so we don’t know the truth of what is happening out there. If we believe the government propaganda that is fed to us by the media, we will think they are preserving us and protecting us. And they aren’t. They are siding with the industries.”

Chickadee believes the traditional ways of First Nations hold answers. “Our prophecies tell of a time when different nations will come to the indigenous people and ask for direction. I think it is coming to that time when our indigenous ways of knowing, our relationship to the land which helped us survive, will help provide answers.”

In her view, people who think First Nations have lost their culture are wrong. “Some of us have forgotten our ways as indigenous people because of the trauma of colonization and residential school,” she said. “But we still have our ancient ceremonies and songs. Our people still hunt, fish, and gather. My brother is smoking fish today.”

She waved toward the lake on one side, the marsh on the other, the forest beyond that. “We have our food security out there, and our pharmacy. I just picked the medicines to take back to Winnipeg. We are holding on to what is sacred, to what keeps us alive. We are still here.”

Resilience: finding how we were meant to live

When I asked Chickadee how she remains resilient through the years of struggle, she said, “It’s not even about resiliency. It’s about our ancestral and original ways, the ways that we were meant to live.”

Sometimes she does think about retiring from activism. Then she remembers Wolverine, in his eighties, who grows food for family, community, and also supports blockades.

“He is a hero in Pine Ridge,” she said, where the Lakota blockaded Keystone XL equipment passing through their reserve. “He’s always coming to pick me up, asking ‘You gonna come?’ He’s the most brilliant man I’ve ever met. With him, I am fed what I’m supposed to be fed, body, mind and spirit. I’d be doing him a disservice if I quit.”

“But sometimes our people know the oppression too well,” Chickadee told me. “The justice systems don’t give First Nations justice so they think, ‘Why do anything?’”

And the challenges to traditional territory are endless. Right now, the Bipole III hydro line which would service the Energy East pipeline has been approved to cross Chickadee’s traditional territory. “We’re Treaty One, the first of all the treaties, but we still have land claims,” Chickadee said. “We have never surrendered our homelands. The time has come for my people to say, ‘Enough is enough,’ even if it means putting up a blockade or a camp.”

I asked Chickadee if “settlers” are helpful allies in First Nations’ efforts to protect their territory. “I think many are coming to the place of becoming good allies,” she said. “We need you as witnesses on the front lines. We are a target for the police. If they see nonindigenous faces, we become less of a target.”

"We are fighting for the spirit of the land"

Chickadee often goes to the front lines for political reasons and ends up performing ceremony and songs. “It’s not just a political fight,” she told me. “The spirit is very much part of the fight against industry. We are fighting for the spirit of the land and the spirit of those beings and of water.” She performs ceremonies to strengthen and detoxify the spirit.

“Songs help us know that we are connected to all life,” she said. “We have a part in creation.”

Chickadee’s relationship to ceremony came to her through her grandparents. They didn’t talk about the Sun Dance, or the other ceremonies they took part in. But as a young girl she watched her grandmother walk great distances to attend them.

“My grandparents were silent about ceremony, but they lived it,” Chickadee said. “Residential school made a lot of people here think that ceremony is bad medicine, to not see how beautiful and strong and alive it is. When I found my own way to it, I remembered my grandparents’ food offerings, the ceremonies. It came to light as part of who I am.”

The tree of life

Chickadee’s sense of purpose in life came to her by way of a vision quest. Here's how she described it:

I was on a vision quest 22 years ago. I had decided that life was too hard and some of the people were too dysfunctional, even though I had thought some of them were traditional people. I didn’t want to live anymore because the world was cruel and I didn’t fit in. My friend came over and took me to see an elder. I’d never seen him before but he knew everything about me, who I was, my name, why I was there.

I went out with my blanket and my bundle and made my lodge out of willows. I thought, ‘Am I doing the right thing?’ The first day I was really frightened – I have this fear of being abducted by aliens - but I sang all night and slept in the morning. On that second day, the animals came, all kinds of animals, mice, squirrels, deer. On this one tree there were many different colored birds, birds I had never even seen before in my life, so beautiful. ‘Wow,’ I thought, ‘They are non-territorial, all singing their own songs and it is making a harmony. I wish people would live like that, in harmony.’ They were showing me something.

Then a low-level military plane flew over and I was annoyed because it was loud and distracted me from my prayers. I thought of the Inuit people, how their babies scream when the military planes fly low at night, how it changes their ecosystem and how deafening it is. So I decided to pray for the Inuit people and the low-level test flying. Then I thought that I’d better start praying for the people who are protecting their forests like the Grassy Narrows and Algonquin. Then I thought I just can’t pray for them, I have to pray for the people who are protecting water so I was praying and praying and I went all across the land remembering everywhere people have been on the front line, protecting the lands. The whole time the birds were just singing away and the animals were playing around me, like in a Disney movie.

I wonder what life would be without the animals, I thought as I went to sleep.

The next day, the third day, none of those little animals came and it was most alone feeling in my life. I understood that their homes were being destroyed too. I understood that those birds and creatures had given me back my life with their way of being together, and that all the things that are happening to indigenous people are destroying their homes too. They gave me my voice to speak for them because they don’t have a voice. Now I speak on their behalf.

So I learned on that vision quest that I had to get back on track. I started speaking out more and calling things what they are, that it’s wrong to do destructive things on anyone’s homeland. There are so many beings there.

I tell people that the land gave me back my life on that vision quest, that those beings gave me my purpose.

As we sat in the car, an ATV roared by. “That’s my niece,” Chickadee said. “She’s 14 years old. She’s probably goose hunting.”

Then Chickadee gave us a tour of her reserve, the nice school, the scattered houses, the old paths. We stopped at her brother’s house. He sat in a little outbuilding, carving jewelry from antlers. We pawed through the turtles and feathers he had carved, listening to Chickadee. She explained that because the Anishinaabe are a matriarchal culture, women have a special role to play in preserving the land and stopping climate change. “Our first vow as mothers to our children is to protect them from any harm,” she said. “This means protecting our waters and our land for future generations.”

“We as indigenous people consider our land as our Mother Earth,” Chickadee concluded. “She is our first mother and she will always love us. She gives us everything. If we disable her so she can’t give us things, where are we as humanity? I tell my granddaughter, ‘You live everywhere. You live in all those beings.’”

Carrie Saxifrage has written for the Vancouver Observer since 2006. Brian Payton says that Carrie’s new book, The Big Swim, “will change the way you think.”