By Carrie Saxifrage | News, Culture | July 9th 2015
#1 of 15 articles from the Special Report: The Climate Innovator Next Door 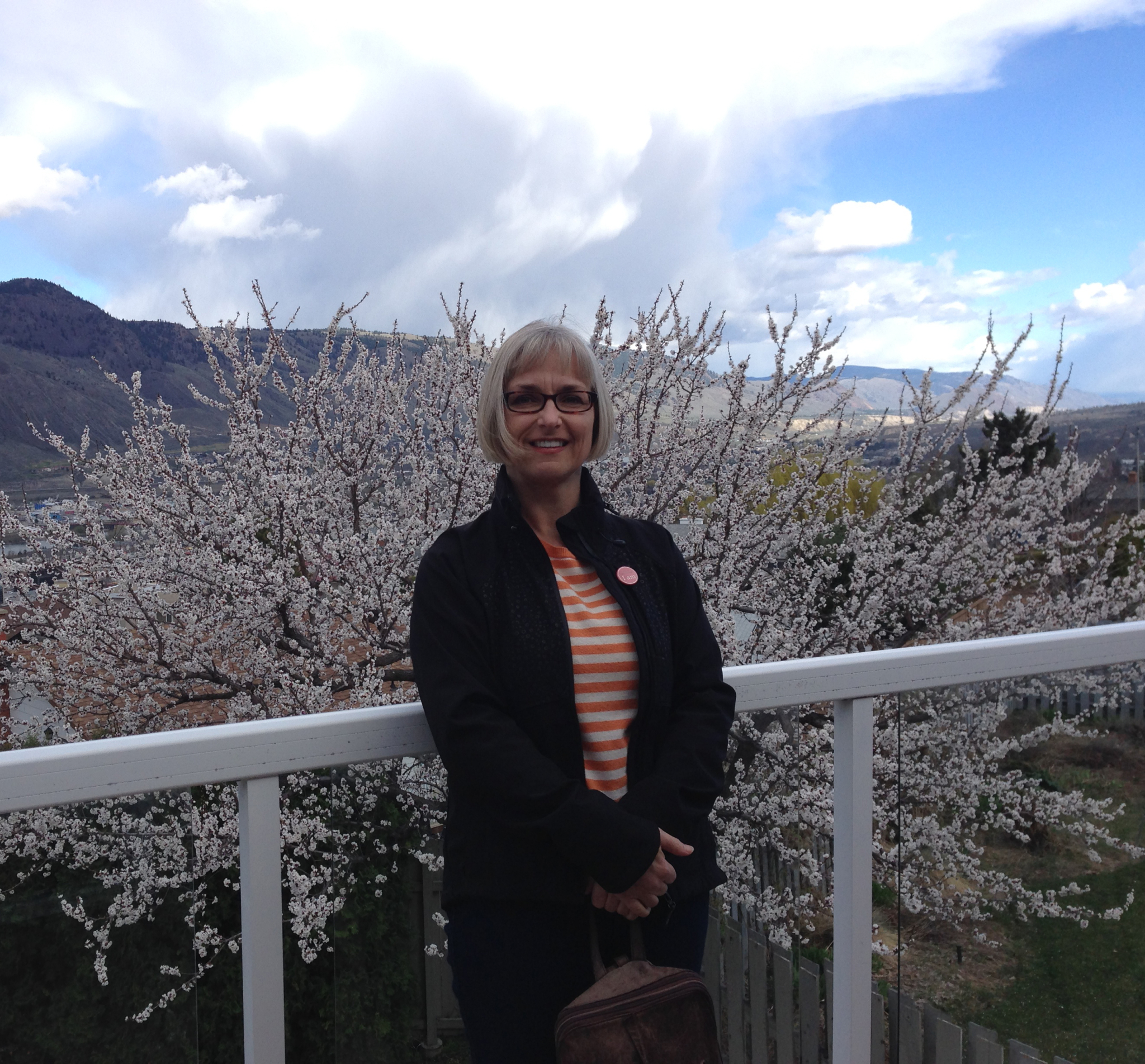 Since the mid-2000s, Gisela Ruckert has led Kamlooops 350 in the effort to educate citizens about the need for climate action. In recent years, most Canadians have come to support climate action, but the electoral system doesn’t reflect that—so Gisela works to reform it with proportional representation.

Gisela Ruckert’s climate activism is like the labyrinth that her Universalist Unitarian fellowship created in Kamloops’ Riverside Park. If you’ve walked a labyrinth, you get the metaphor: the path heads directly toward the centre destination and then veers away.

Sometimes you're almost there. Other times, you're far away and walking in a completely different direction. Then, quite suddenly, you arrive.

In early April, I sat at Gisela's (pronounced Geese- ela) kitchen table drinking tea. It’s hard to find a place in Kamloops that doesn’t afford a stunning view and hers was no exception, her kitchen window looking out at the dun hills across the broad Thompson River valley. A cherry tree bloomed just off the back deck.

Gisela herself has silver hair in a crisp jawline cut, stylish glasses and a red electric smart car. The story of her activist involvement begins when she moved back to Canada from South America in 2000. She was eager to read news in English, she says, and at that time there was a lot of climate coverage.

As her awareness grew, she grew more alarmed— and with a handful of like-minded people in Kamloops, she founded Kamloops 350.

“We were part of a building movement, with a great feeling of hope and solidarity,” Gisela said. That hope was fed by Kamloops 350’s local versions of the international 350.org’s global days of action. The rallies attracted several hundred people. “Everyone thought, ‘Oh, yes, we are going to do this thing.’”

“Then 2008 the recession hit. Climate change completely dropped off the national and the individual agenda. It became something that of course we should still do, because the environmental stuff is nice, but it’s not as important as the economy. We’re only now seeing a shift back to the understanding that the economy requires a habitable planet.”

Gisela recounts how the members of Kamloops 350 became "terribly depressed" and decided that an educational approach might be the best way to reposition climate change near the top of people’s agendas.

In the Great Green Transportation Tune Up in 2011, they collaborated with the City of Kamloops to feature green transport options. “We had things like a transit treasure hunt to introduce people to public transit, and an electric and hybrid car display,” Gisela said. “It kept getting bigger and was very successful.”

Gisela noted how, around 2013, polls started to show that Canadians do care about climate change. In fact, three quarters of Canadians wanted the federal government to sign an international treaty on climate change – even if China wouldn’t sign – and more than half of Canadians supported a price on carbon.

It seemed that people once more understood the urgency of climate change. Now the problem is that this urgency isn’t reflected in our governments’ priorities. “Now we see the way in which we elect governments as the obstacle,” Gisela said. “To get accountability, we need a government where 39 per cent of the vote will get you 39 per cent of the seats— a nice chunk, but not the controlling majority we get under our current voting system.”

Canada’s “first past the post” system allows a party that wins enough ridings by even a slim margin to take majority rule, even if more votes overall were cast for other parties. “First past the post” has simplicity in its favor, but at the cost of fairness.

This part of the labyrinth might look like the path leads in the wrong direction: Alberta’s new Premier, Rachel Notley, promises real carbon pricing and a phase-out of coal electricity for Alberta. With proportional representation, she might not have won with only 40.6% of the vote.

Still, most Canadians believe their democracy is in a state of crisis. Lawrence Martin describes Canada as having the highest centralization of power among all parliamentary countries in the world. For Kamloops 350 and other organizations, electoral reform is necessary if citizens are to regain control of their country.

Fair Vote Canada doesn’t advocate a particular method of proportional representation. It calls for a citizen-led consultation process after the next federal election, and implementation of the chosen model in time for the election after that.

The Law Commission of Canada and the federal NDP advocate the Mixed-Member Proportional (MMP) system, which is used in Scotland, Wales, Germany and New Zealand.

In MMP, voters vote for their individual local representatives in the current manner. In addition, they cast a separate, second vote to elect “top-up” regional MPs so that a party’s share of the seats reflects its share of the popular vote.

Kamloops 350 also heeds the call of Leadnow.ca to identify the local candidate with the best chance of defeating a conservative candidate, regardless of party.

Momentum and convergence toward the centre

Later that evening, I visited with Gisela and her husband in their kitchen while they made cookies for their young adult sons. It was coming on Easter and a Victoria-bound friend was going to deliver the treats the next morning. I watched Gisela, the mom, ensure that the peanut butter filling took on its traditional texture within its cookie nest.

“We are definitely on an upsurge,” she told me while baking. “Media coverage is better and we’re doing a better job of presenting the benefits that could come with action on climate change.”

She mentioned better transportation, infrastructure that builds community, the sharing economy, and local food. “There’s convergence and momentum between groups because we are all heading to the same place.”

Walking the labyrinth, it’s hard to know how much farther you have to go before reaching the center. The disconnection between the majority Canadian viewpoint on climate action and the minority Conservative government’s foot-dragging might hide how close we are.

Kumi Naidoo, the Executive Director of Greenpeace International, notes that “All these struggles have only moved forward when decent men and women have said enough is enough and no more.”

Canada, known for its decency, could use the next election to make the final turn toward the center of the labyrinth.

Carrie Saxifrage has written for the Vancouver Observer since 2006. Manda Aufochs Gillespie said Carrie’s new book, The Big Swim, “is a must read for all those who think they don’t want to read another environmental book.”

The object of a voting system

The object of a voting system is to give as many people as possible a representative who they want and voted for. Our present system, First-Past-the Post gives less than half the people such a representative. The system that works best is the Single Transferable Vote, STV, also called Choice voting - a more descriptive name for it; it gives about 90% of the voters a representative they wanted and voted for. It has numerous advantages over the MMP system mentioned in the article. Its main ‘disadvantage’ is that politicians hate it because they lose control over who is elected.
STV was the recommendation of the BC Citizens’ Assembly on Electoral Reform in 2004. In the subsequent referendum 5 months later, 58% of the voters agreed. Yet, the BC government refused to institute it. Yes, subsequent referendums failed, but this was because of political interference.
STV is used in many places, Ireland and Australia for example at the national level.
The really important matter is that it is the voters who should select how they are to be represented. Politicians should have nothing to do with it as they have too much vested interest.